In my earliest years of teaching at the university, I did a mean thing to my Distance Education students. The fact that I did it several years in a row, until it became impossible, just adds to the wilful sneakiness of it.
Residential Schools were compulsory at that time, some 35 years ago. This meant that students had to trek to Armidale twice a year, sometimes from interstate or even from abroad, for four days each time, put up with being lectured at by me and share tutorial discussions.
It was quite a commitment on their part in terms of time and money, and I wanted to know what made them tick. A first year course on the History of Asian Civilisations wasn’t like learning bookbinding, after all – it was a bit esoteric; at that time at least.
As an undergraduate, I’d had experience of Residential Schools at the University of Queensland when studying as an External student. They weren’t compulsory and I didn’t find them all that satisfactory, so I expected the students who came to my first Residential School to be similarly unenthusiastic.
What I used to do, as I was under thirty and looked even younger than my age, was to come ten or so minutes early to the very first session of a School, where we would meet for the first time. This was the mid 1970s, and the teaching material was all typed (on a typewriter!), printed and contained no photos.
It was, after all, at least a decade before most people knew what cassette tapes containing recorded lectures, let alone a computer, could do for revolutionising university teaching, but that’s another story. Suffice it to say here that I was a Cassandra in that respect for the best part of a quarter-century.
So... I’d put my thin file of lecture notes on the desk at the front before anyone else arrived, together with a large box, and go and sit at one of the desks just like any student. As they arrived for the introductory lecture, I’d say a cheery hello to the first, without introducing myself any further, and the student would respond according to how they were feeling at the time – usually relieved that they had actually found the lecture room that would be our home for the next four days.
Others would drift in and join in the conversation. They would talk about anything, but their mutual interest was, of course, the unit they were enrolled in. They freely exchanged opinions on the lecture material and the interaction they had had with the lecturer (me!) through letters, and thus gave me the most truthful feedback I could hope for.
I have to say that I was fairly confident no-one was going to say something too shocking about either the course materials or the lecturer. I had put my heart and soul into it all and I knew it was good. I was pretty cocksure that no-one would embarrass themselves or me in this sharing of information and opinion amongst themselves.
I’d give the remainder of the students a good ten minutes after the formal lecture start time to arrive and settle in. There were always stragglers who’d gone to the wrong building or had come to the university the day before and had imbibed more freely in the Refectory wine that evening than was good for them.
Then, when I was pretty sure they were just about all present and had unburdened themselves to us all, I would stand up with the blue Attendance Register in hand, wave it at them and say, ‘Right then – let’s get started, shall we? Sign in and we’ll get under way.’
There’d usually be an audible drawing in of breath at that point, every student trying frantically to recall what they said about the course and the lecturer and hoping they weren’t dead in the water before the first session. I guess they were a bit shocked that the elephant had been in the room the whole time and they didn’t have a clue.
Of course, I wouldn’t have any idea who they were at that time, even if they had said something negative about me or the unit of study. The reality was that it was a real ice-breaker, and put us on casual terms from the very first minute, which is what I wanted.
Many of them were a good deal older than I was anyway. My indifferent undergraduate experience of Residential Schools was completely reversed. They were here to learn, they weren’t afraid to talk and debate and argue the toss with me, and they were determined to get every ounce of juice out of the four days. In fact, by the end of the 4th day, I would collapse on the lounge room floor when I got home, and sleep.
I think some of them were Dementors. No, not really.... It was exhilarating to teach students so enthusiastic. I was simply completely whacked after a School, but found it intensely rewarding. 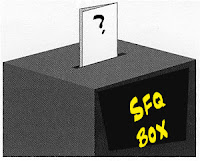 While they were recovering from the shock of learning who this kid at the front was, I would apologise half-heartedly to them, and offer them a trade-off. This was called the SFQ Box. Its name was boldly inscribed on its side. It looked just like a ballot box.
S stood for Silly, Q for Questions, and the F in between, I said, was for Flamin’, but many had their own substitute word for that, much more shocking in the 1970s than now. I played it safe. The Silly Flamin’ Questions Box. SFQ.
‘This box will remain here under the desk for the next four days. What you can do,’ I said, ‘is to write even the most ridiculous question concerning the unit on a slip of paper, and drop it surreptitiously if you like through the slot in the top.’
‘Each afternoon after we finish for the day, I’ll gather the questions and answer them the next day as best I can.’
I made jokes about throwing the questions I didn’t like into the fire, but of course I never did that.
The fact is that sometimes the ‘silliest’ questions are the ones many people want to know the answers to, but are afraid to look foolish in front of everyone else by asking them. Or afraid to look ignorant in front of the lecturer. And often, they are the best questions and deserve the best answers.
Sometimes they are the questions that put the last piece of the jigsaw in place for the student. All the rest of it may be there for them. Maybe, to change the analogy, the answer to that question is the keystone that locks the arch of knowledge together on some subject, and turns knowledge into understanding.
The SFQ Box was a very popular institution for the first couple of days of any Residential School. After that, students were confident enough to ask any SFQ, and we were all the better for it.
Posted by Denis Wright at 9:48 AM