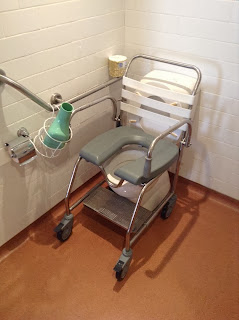 I expected to complete this story earlier, but events overtook its rambly journey. Consequently, I’ll trim it down because time’s growing short and my [abilty to precess the words to the keburd hs suddly abut collasped. It has thaken me an abut fe minute to write thag three sentece] ability to process the words to the keyboard has suddenly all but collapsed. It has taken me about fifteen minutes to write these three sentences.

This isn't getting the story finished. I thought I was about to face one of the things I dreaded about being in hospital, something that was not necessary when I was in hospital twelve weeks ago. I would be getting ferried by mobile potty-type chair – minus the potty – to a position which seemed high above the toilet bowl. When I and the toilet had completed our assignation there would be what I had previously regarded as the greatest possible attack on my dignity.

You know what I'm talking about. To put it very delicately, it’s having your adult arse wiped by by another human being.

You know what? As many adults have discovered, long before I did, this procedure turns out be nix, nada, nothing. The nurses have done it a thousand times and to them it’s just another minor but vital task.

For more than sixty years I couldn’t imagine myself needing this help, except perhaps as a frail old man in some distant future. I didn't think that I might become ill in a very short time. After all, Tracey and I had been playing squash three times a week up to the day before I got that first seizure.

I suspect women are not so squeamish about medical things to do with their bodies as men, especially men of ahem... mature years – men used to being in positions of power and authority.

You feel awfully vulnerable that first time with a nurse of any age standing behind or beside your bare buttocks with a wad of loo paper in hand. You don't have your protective CEO suit on hospital.

But here I was, last Friday, not a CEO of anything, facing the prospect of being ferried to the toilet.

To backtrack a little, I was going to call a nurse, get myself shovelled on to the portable commode chair and deal with the stomach pains in the bathroom – immediately.

But then I had my doubts that I was going to make it to my destination unscathed. Or maybe the carpet wasn’t.

I passed this calculation of time and motion on to the nurse as soon as she arrived. It was a busy night and I wasn’t the only customer in the shop. As unflustered as professionals always are in these circumstances, she bid me stay right there (like I was going to flee the country right?) while she got a bed-pan. She did this with alacrity.

Usually it's not hard for a person to turn on their side in bed, so that the pan can be placed in the right spot, then both the person and the pan can be turned upright so that the person is neatly on the pan and good old gravity can do its thing when needed. The problem was that my right side was weak and things seemed no longer Code Red but a marginally Whiter Shade of Pale. [That is so disgustingly bad a piece of purple prose I’ve got to keep it. Bulwer Lytton Awards, we have a winner.]

I decided that it was safe for me to attempt the marathon journey of five metres to the toilet. The effort of getting me up on to the pan had temporarily quelled the desire. The bed-pan was abandoned.

We negotiated the terrain to the bathroom without incident.

After several trips to the toilet bowl now with my private chauffeur and my privates exposed, I think I’ll be ready for the bed-pan now, should the need arise. I don't say I like the idea, but I’ll cope.

You're all just dying to know if the visit to the loo was a success, right? Well, no, it wasn’t. I was still too freaked by the bed-pan it seems. But you'll be happy to know it was only a temporary setback and a few hours later with another visit to the bathroom, it all came out just fine.

This post is dedicated to the many like me who have looked after their bodily functions from childhood but now face handing that jealously guarded care over to someone else. My message is, don't be afraid. Nothing bad is going to happen. On the contrary, you are going to learn a spectacular lesson in humility. If you accept with good grace what can't be changed – and with humour if you can – what would seem a blow to dignity soon ceases to become so.

It isn't a blow to dignity, anyway – just to pride – and there's a difference. The difference mainly concerns attitude.

You can see how quickly I got over those first feelings of horror.