The Tao of electrical goods


Because of the division of labour in our farm household when I was a child, ironing was one job I never had to do. I had three sisters, and they were always ironing dance dresses or school uniforms with box pleats. Girl stuff like that. I know about box pleats only because of how much Lyn and Kay hated ironing their school uniforms, which were loaded with them. "Box pleats" with additional adjectives often came up, and the adjectives tended to be colourful.

The time came, eventually, when I had to do my own ironing. It was a novelty and I didn't mind it. One day I was in a hurry, and was ironing furiously, but it wasn't going to well.

Stop. Think. Understand the nature of the thing you are trying to do, Mr Ironing Man. The iron is set to iron cloth at a certain temperature. Go too fast and you're always trying to iron cold cloth. Cold cloth doesn't iron, or at least if it's not up to the right temperature, it's going to take twice as long to do, and not look even half as good.

So, it's a classic case of "more haste, less speed." I quickly learned that there was a perfect speed which created optimal efficiency, something that experienced ironers knew almost by instinct.
. 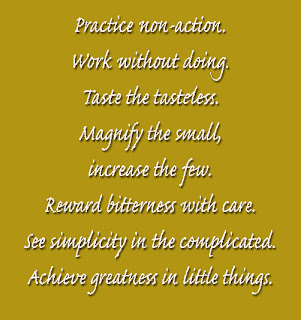 Instinct? No, it's not that. It's using their intelligence, observation and experience. The old "ironing lady*" understood perfectly the nature of the job, and from the outside at least, it seemed effortless.

In that sense, she was using Taoist principles. In Buddhist terms, it can be a meditation, like walking meditation, attending fully and understanding the task every step of the way.

Many would call it plain common sense, but as often has been noted, common sense isn't always as common as it should be, or the world would be in better shape.

This principle applies to everything really, but in a society always trying to make things "easier", it can produce exactly the opposite result. A lot of electrical things make good examples. There's a right speed to use a power drill. Forcing it only damages the motor and the drill bit. No point racing along your teeth with an electric toothbrush – just ... slow down ... and let the brush do what it's designed to, in its own way. An electric shaver? Take it slowly and allow it do its job as designed.

Polishing shoes. Churning cream to make butter (not a lot of call for that these days, admittedly, but if you've ever churned cream, it's surely a case of "softly softly makee butter".) Everything has its own correct mode and rate.

It all comes back to one thing. Understand the nature of the thing we are trying to do, and it will look effortless, and there's a chance may even feel that way.

Doing ordinary things this way will also be a meditation. If it's prayers, they are meditation too. Racing through them doesn't seem to be quite what it's all about.

None of it is fundamentally about religion. It's about wisdom based on knowledge. Would that I had more wisdom.

It's what the Taoist calls "non-action", and this is very far from doing nothing. Yes, I've written about this before, and discussed it with decades of students. It's knowing the discipline needed for the task, and applying it effectively, and that takes away all the frustration. The right outlook can even make the hated job pleasant.


___
*No outraged snorts of indignation please. When was the last time you sent out stuff to an "old ironing man"?