Beating the odds: the amazing story of Arthur Miles

In 2005, the Armidale Express asked for true stories to commemorate ANZAC Day. There was a huge response. I sent this one in about my grandfather, and it was one of three published.

Beating the odds: the story of Arthur Miles 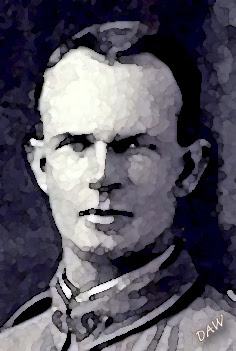 I never knew my grandfather. He died before I was born, but my mother passed on to me his fascinating story about surviving the battlefields of France.

His name was Arthur Alexander Miles, born 18 January 1878. I guess you'd say he was both lucky and unlucky. Unlucky he was so severely wounded that he was left for dead in no-man's land on the Somme, but lucky that, through a series of near-miraculous events, he survived.

Not only that, he returned to Australia, aged 37: hair thinning, one-legged and nearly penniless - and then he married my grandmother, a girl of 20. And if it were not for that happy event, I wouldn't be telling this story now.

Arthur Miles was one of the few World War 1 soldiers who put his age DOWN in order to enlist. Many youths of 16 or so had put their ages up, but he was in his 30s when war broke out. Within months, he found himself in the mud and lice and freezing misery of the trenches in France, having to make suicidal charges over the top from time to time. He had done that more than once, but fortunately had managed to get back to the relative safety of the trenches after each sortie, more or less intact.

His luck ran out during a major offensive near the very end of the war, the battle of Mericourt-sur-Somme, when, on 9 August 1918, he was caught in no-man's land by shrapnel from a shell that exploded nearby, shattering his foot and lower leg. He lay there for hours, drifting in and out of consciousness, trying to endure the pain and shock and staunch the flow of blood as best he could.

During a lull in the battle, stretcher-bearers came out to rescue wounded men they thought had a reasonable chance of survival. Arthur Miles was not one of them. He had lost a lot of blood and there were other injured men who had better claims. Like many others, he was left for dead.

This might have been the end of his story, had not fate intervened on his behalf. His cousin Bob was a stretcher-bearer who had only recently been posted to the Somme. He had made several trips in the course of this engagement returning with wounded men, and during the lull in the fighting was now out in no-mans-land again. He noticed that this man they had passed by several times was still alive, though barely, and turned him face up. ‘Good god, it's Arthur.’ He turned to the other stretcher-bearer. ‘We're taking him back.’

I don't know the reaction of the other ambulance officer to making the effort for a man likely to die at any minute, but they brought him in.

In the field hospital, Arthur's leg was amputated just below the knee, but he was in a bad way. He'd lost a lot of blood and the wounds were severely infected. He hovered between life and death, and then gangrene set in. The surgeon decided that his only chance was to amputate again, this time above the knee. There was no choice. In his weakened state, he had little resistance to infection, and the leg once again became gangrenous. Days later, he had to endure another amputation, this time at the hip.

If the effect of three major operations in any army field hospital were not enough, he now faced an even more critical threat to his survival. Within hours of the third operation, he developed tetanus (lockjaw). The doctor took one look at him and said quietly to his companion, "That man won't live the night." Arthur said to him, apparently with much more conviction than was warranted under the circumstances, "Yes, I will!”

He did. Against the odds, he survived the tetanus infection, and the wound did not become gangrenous this time - which is just as well, as there's not much further you can go cutting bits off people than Arthur had endured.

He returned to Australia on a hospital ship, along with men who had worse battle scars than he - men with lungs nearly destroyed by mustard gas, hideous internal injuries and severe war psychoses such as shellshock. He learned to use crutches with great skill, and to overcome the many difficulties faced by returned injured service men and women re-entering civilian life.

His first-born son was called Robert, after the cousin who has saved his life. Uncle Bob, I am happy to say, is still very much alive, and a tough old octogenarian. He has researched his father's life and has much of the documentation for this story. My own middle name is Arthur, in memory of my grandfather Miles.

No doubt there are countless tales from the battlefields that are much like this, but the courage and will to survive by men like my grandfather deserve to be recorded, so that their sacrifices will never be forgotten. 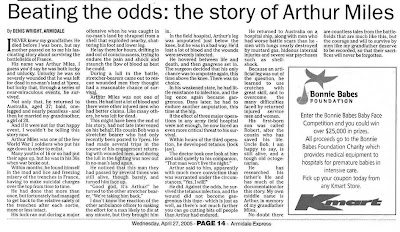