pt 1 | pt 2<< you are here | pt 3 | home | stories from my past | WHAT'S NEW!
We were in our hotel. It was quite modern and comfortable. In the reception area was a sign which got the attention of a few of us. 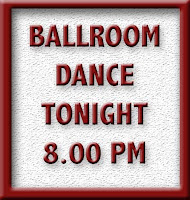 How very strange! A dance advertised for that night in a hotel in a city in the middle of desert nowheresville? I was certainly intrigued. So were a few others.
Most of our group of 34 were tired from the travelling we’d done by train and coach, but they varied considerably in age and background. Several had grown up in country Australia, and we were raised on ballroom dancing, country style, as I related in vivid, and I hope entertaining detail, elsewhere.
It was after 7 pm. Some of those with both an interest in this phenomenon and the stamina to check it out decided to try to crash the party.
‘Can we go to this?’ I asked at the Reception Desk. Fascinating as it seemed, we didn’t want to rush our meal, shower and change, only to find out we weren’t allowed in.
‘Of course,’ the clerk responded, pointing at the sign. I guess as it was in English, it wasn’t really a smart enquiry on my part, but better to be sure. ‘It begins at 8 pm, as you see.’
I’d come on this trip bringing minimal gear, which is my wont when travelling. But, apart from sneakers, my one pair of dressier shoes was leather-soled. My wardrobe was sparse but the shoes were the important bit when it came to tripping the light fantastic, Calliope style.
Half a dozen of us found the huge room in the hotel where the dance was to be held, a large stage at the other end, with a piano, drums and some other musical instruments set up on it. It wasn’t going to be quite Mitchell’s Orchestra of three as in Calliope – the musical scale was a fraction larger than that.
We were a few minutes early. Other than the musical instruments, the room was quite empty. It didn’t look promising. There was no-one selling tickets.
So, we walked in, just as some activity occurred on the stage. An orchestra, rather like an oversized jazz band, men in dark suits and women in sober colours, filed on to the stage, carrying the brass, woodwind and stringed instruments you’d expect for a dance band.
At least something was happening. But where were the people? The answer came almost immediately. The noise of many feet quietly walking, the rustle of fabric and a few murmurs in Mandarin made us look towards the entrance we had just come through.
Scores of Chinese men dressed in seemingly identical dark suits, each accompanied by a lady in a long evening gown, were flowing in. They must have come on a bus. No, buses - way too many for one bus. While the orchestra quickly tuned its instruments, the large room filled; not to overflowing, just the right amount. The women’s dresses were each a single but different pastel shade. It was quite stunning.
There was one variation in the dress of the men. Perhaps a tenth of them, most accompanied by their wives, I expect, were in full army dress uniform. These were officers of quite high rank.
After an anthem of some sort, the first number began. The orchestra played perfectly, totally disciplined. It was an Opening Waltz, just like in Calliope! But there the comparison ended. The dancers were .... well ... perfect, that’s all I can say. Nothing exuberant or showy – this wasn’t after all, the terrifying scenario of that Australian classic movie, Strictly Ballroom! – and nor, I am bound to say, was it mechanical in its perfection. It was fluid and free and quite entrancing, really.
Now just a minute! Where the hell are we? In the middle of the desert hundreds of miles from anywhere inhabited by humans, in the middle of China, a part of the country the Han Chinese traditionally hate because it has no resemblance to the lifestyle of the great river cultures of the ‘real’ China. In a ballroom, a jazz orchestra, with graceful dancers doing brackets straight out of the 1930s. Foxtrots, Barn Dances, Evening Three Steps ... what’s happening here?
You know what it is?  We’ve entered a timewarp. We are in Shanghai, in 1931, and the Japanese haven’t invaded yet.... only don’t look out the window or you’ll see desert and dull little mud-brick houses, not the vibrant port, the docks, the crowded streets and clamour on the river which Shanghai straddles. Shanghai, the most cosmopolitan of all Chinese cities – hardly surprising, given its maritime location over centuries.... I loved Shanghai in 1991.
But we are in Jiayuguan. Jeeya You Gwarn.
G’warn, say it aloud. Remind yourself where you are. You’re not in Shanghai. It’s not 1931, it’s 1991. You’re in a room full of people who could be dancing to entertain the Last Emperor, only the dynasty ended in 1911. (A hundred years ago, exactly. What’s with all these dates ending in 1?)
I am jerked out of this 1991 reverie by the band striking up a jolly tune. I can’t believe it but it’s true. Of all songs one doesn’t expect to hear coming out of a ballroom in outback China, this has got to be top of the list. No, not that tune, guess again!

(continued – but wait... there’s more. One extra surprise, at least, and then I'm done.)