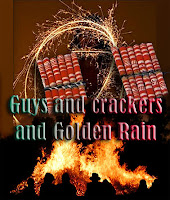 Before I go on, I feel bound to say that I didn't want to give the impression that there was any great danger in the sorts of cracker nights we had out in the country, under the watchful eyes of our parents. We were more likely to contract an infection from the predecessor of Ross River virus from the mosquitoes than get hurt by crackers.  There were general rules we observed with all the fireworks and they served us well.
This didn't mean there couldn't be accidents - indeed, I precipitated one myself that could easily have burned the house down - but no-one at our bonfires ever sustained what anyone could call an injury. The problems came only when kids - mainly teenagers - did really stupid things with fireworks, and so all of them except sparklers were banned from private sale and use.
That no doubt saved a few cases of lost eyesight, and nasty scars from burns, no doubt to the great relief of Casualty Departments of all hospitals on the night. But we were country kids, and there was no hospital close by, and we weren't as reckless as some of those dumb townies....
Variety

Apart from Tom Thumbs, crackers increased size and power. For me of course, the bigger the better, as for most boys - and their fathers. There were:

Double Happys - which I've already mentioned. This movie of one exploding is the right colour but a third the size.

Penny bungers - as big as a man's finger

Double bungers - these had a central wick and there was some skill in tossing them. They were designed so if you were good enough with your timing, there would be one explosion and shower of sparks at the apogee of the throw, with the force of the first bang throwing the bunger even higher, whereupon the second of the bangs went off.

One or two big red bungers half the size of a stick of dynamite completed the collection of noisemakers and were truly awesome! We usually were lucky to have even one of them, as they cost more than a couple of strings of smaller ones. One or two were fun though, even if they scared the wits out of the horses in the next paddock.

Then there were Jumping Jacks, which were great fun because they were unpredictable in where each consecutive explosion would hurl it.

If it landed amongst the spectators it could create quite a stir, but I never heard of anyone getting hurt with one. I expect if you dropped a lit one down someone's pants the story could end differently, but that sort of thing's how fireworks came to get banned. That and a few houses burning down.

Pretty ones came in all shapes and sizes. These usually were placed on the ground on a level spot, or in some cases, speared into a soft patch of turf if they were designed that way.

We usually set them off one after another as a display, and suspended the lighting of crackers for that time, which is common sense for all sorts of reasons when you think about it.

Our list included ones such as Roman Candles, Golden Rain and Flower Pots. Jan says there were also 'Flower Gardens' but I don't remember those. knowing her, she's probably right. I do remember though that I liked the Flower Pots because although they put on quite a spectacle of pretty pyrotechnics, they weren't as innocent as they looked. At the end, when it seemed all over for the Flower Pot, it would explode with a series of cracks like a machine-gun.

I wish I could find a picture of one but I can't. Guess who really thought that was a smashing bit of pyrotechnics from those wonderfully Inscrutable Orientals?!

(I just had another look online and I did find one they called a Flower Pot but are more like what we called a Volcano. I'll bet it didn't annihilate itself completely like our Flower Pots did, though - which would have been a great ending for a Krakatoa-type firework, hey?)

Others included pinwheel types - Catherine Wheels in our lingo. You pinned them to a post with a drawing pin (or in our case, a small panel pin nail, which gave it more freedom to spin and therefore was more spectacular in its fiery whirling.) 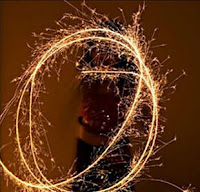 No doubt other people remember later variations. For us, it might not have been Sydney Harbour Bridge on New Year's Eve, but from three metres away, it was every bit as good. Maybe better.

Oh, sparklers, of course - magical because their sparks just prickled the skin and didn't burn - unless you encountered the very hot central bit. They're still available so there are no surprises with them. In the darkness in the bush, the fast circles we could whirl with them left circles of bright light on our retinas.

Last and far from least, I must mention the Sky Rocket. No Guy Fawkes night would have been complete without one. Many times our finances eked out only to one single one, reserved for the end of the night. Usually they were placed in a beer bottle and then lit by a parent. Care was taken that the bottle was on level ground and that the skyrocket was placed properly in it. if a bottle tipped over just before launching, who knows where it might have aimed itself?

But oh! The sight of our own skyrocket shooting magnificently to the very edge of space, then floating back down with a last gasp of flame....

Guy Fawkes Night would be over then, for another year. But I haven't finished yet.... I need to tell you how I nearly burned our house down, and other amusing things.