"A crowd of people stood and stared"

[The Beatles A day in the life]


"You won't believe what happened in the staff meeting today."

In the days when we went out to work for other people, we'd come home with a lot of things to talk about, even though they were not of great significance for the future of humankind. There was plenty to share and laugh at; to be amazed by the antics of my university students or other staff members, or courtroom tactics in a particular case where Tracey was trying to save some sad sod's job when caught .01 over the alcohol limit.

When we were out filming in our business after The University and The Law, life also had that unexpected quality. There was plenty to discuss.

Now I don't go out much. I like it that way, but it has disadvantages. Serious ones.

One is that my conversation becomes painfully limited. If I talk about the things that are happening about me, then it zeroes in on seizures and headaches, injections and showers. The weather. Dogs barking outside and ah the serenity of the street with the comforting sound of three mowers and the garbage truck. Who Tracey met while pushing a grocery trolley in Coles. The quality of the pears.

These, I must admit, are not the most exciting of subjects. Naturally Tracey and Christian pep it up with news of their other activities where they can.

And yet, by 6 am on most days, I have read all the newspapers online that I wish to. I know more "news" than anyone in the house and probably in the town.

There's tons to talk about really. The world is loaded with interesting things that are happening. So, my thought went, let me take note of some of them and we can talk about those if the conversation flags at dinnertime. Anything's better than whinging. In fact, nothing's better than whinging. Silence is better, that is. As in the Silence of the Lamb Chops and the clinking of cutlery.

Just before dinner I glance down the list of things I've read about during the day, so I can bring up some discussion. Take today's (then 15 April 2013) most popular stories for example, from the ABC.  What have we here...?

What of these will interest three people, one a twenty-year old?

The one about the emu oil fixing the stomach lining of chemotherapy patients eaten away by the drugs has special relevance in this household, admittedly. It's good for one minute's worth, if that. But, apart from that, there's not a bit of that so-called news worth mulling over without upsetting or boring someone silly.

This is hardly news, and the commercial outlets are far, far worse. They are 'grab' pieces with the newsworthiness of takeaway Thai – or, importantly, events none of us can do a thing about, except get cross or agitated.

Not true, you protest. Some of them are worth exploring. Fine – if real exploring occurred. What has the good old BBC has on offer as most popular stories? 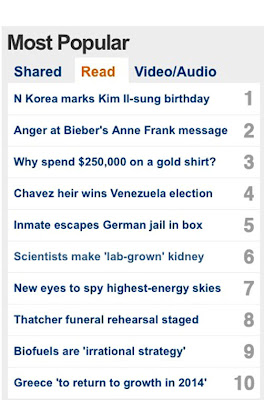 Well look at that. Justin Bieber scored a double, ABC and BBC. That means it has to be important, doesn't it?

Surprise! It isn't. It's part of the scrapfotainment served up as something relevant to our lives. It seduces us into reading a story in the mistaken belief that it adds value to our existence.

The development of regenerated kidneys may be worth looking at, and the one on biofuels. Who cares if the Thatcher funeral is rehearsed? Or the price of a blingy gold shirt to a congenital idiot?

Real news analyses things that matter. The real stories are the ones that get below the surface. What is the real story behind home invasions? What are rights of the homeowner in the light of attacks on octogenarians in their homes? If someone gets stabbed in the street, the story is really about why knives are omnipresent as weapons, the profiling of the knife-wielder and victims, why the law banning these weapons is totally ineffective.

That's why when I go at 5 am to the BBC's home page on the Kindle, I skim the "news" to see if the earth is still on its axis, and skip down to the real journalism, to read the longer, reflective articles that have depth and quality.

This isn't guaranteed to improve our dinner conversations, but it's start. That's if I can remember the story at all, but there's no certainty of this.

And yet... some of these infoscraps are like the dots you need to connect in order to understand what's being fed to people today. This Korean business: I want to know, is the Fat Controller running the show in the Orwellian Democratic People's Republic of Korea? Is it a plan to extract money from the rest of the world like a protection racket? Well, we know it is, but how strong is that motive? What about behind the scenes? Are Beijing masters manipulating the puppets? Does the American military establishment love this and play its part in the orchestration of tension to get more money, more military toys, which helps Congress reps justify saving their state's defence industries and thus keep their electors happy?

If a real story comes along, this missile one is a dud. But what sort of reporter do we need to research that properly? There are probably no dedicated Watergate type newshounds collaborating on such projects. The resources are no longer there for genuine investigative reporting no matter how good the reporter. That's why we in Australia so desperately need our news analysis programmes like AM and PM, and Four Corners.

And what do I do otherwise? I can save two hours a day ignoring the "news" and I have volumes to read, but I don't mind a bit of infomercial entertainment once a week (called the Channel 9 News). Do I like the cute little baby zoo panda at the end of the "news" on TV? Gotta keep a sense of proportion about all this. Life is a bit of froth and bubble occasionally. There are some seriously dull people around.

Coincidentally, I came across this piece – a somewhat reflective piece, in an online newspaper. I expected it to be dodgy, but I was wrong. Although it makes assertions that aren't documented and may be questioned, it has a lot of truth in it, if my own experience has any meaning. Read the excerpts at the end of this before going to it – if indeed you feel persuaded to go anywhere.

Bear in mind that these comments relate to what is classed as news these days, but isn't. It's not the stuff of which real news is made. But if what's above, called news, is the best two great institutions can do, then heaven help those who only read or view "news" from commercial rubbish-gatherers and pay TV.

How painfully apt the lyrics of the Beatles' song are. Maybe that's what we'll do for dinner – play Lucy In The Sky With Diamonds, followed by OB-LA-DI, OB-LA-DA.

STOP PRESS: And then we have this. By the time you read this, you'll be so sick of it you'll want to throw up, even though it surely is a genuine news story, and my deep sympathies to those affected (along with the dozens of innocents killed this week in a series of bombings in Iraq. Rather different treatment of a terrorist attack, yes?) There's some serious research needed here, though will it be aired if ever it is done? What we'll really need are journalists and a place to put their findings. That means real newshounds with knowledge and experience, not ones selling their souls to grab a "new" angle because that's what they're ordered to do. 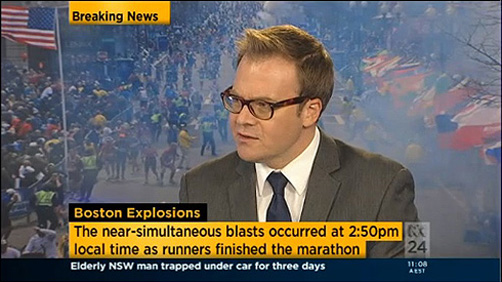 Excerpts from News is bad for you – and giving up reading it will make you happier Please read the whole article, if you find any of the excerpts below of interest. I stress, it accepts a loose definition of what news is.


Unlike reading books and long magazine articles (which require thinking), we can swallow limitless quantities of news flashes, which are bright-coloured candies for the mind. Today, we have reached the same point in relation to information that we faced 20 years ago in regard to food. We are beginning to recognise how toxic news can be.

Out of the approximately 10,000 news stories you have read in the last 12 months, name one that – because you consumed it – allowed you to make a better decision about a serious matter affecting your life, your career or your business. The point is: the consumption of news is irrelevant to you.

News has no explanatory power.

The important stories are non-stories: slow, powerful movements that develop below journalists' radar but have a transforming effect.

News is toxic to your body.
...your body finds itself in a state of chronic stress.

...comprehension declines as the number of hyperlinks in a document increases.

News works like a drug. As stories develop, we want to know how they continue.

The more news we consume, the more we exercise the neural circuits devoted to skimming and multitasking while ignoring those used for reading deeply and thinking with profound focus. Most news consumers – even if they used to be avid book readers – have lost the ability to absorb lengthy articles or books. It's because the physical structure of their brains has changed. News wastes time.

Information is no longer a scarce commodity. But attention is. You are not that irresponsible with your money, reputation or health. Why give away your mind? News makes us passive. News stories are overwhelmingly about things you cannot influence. It grinds us down until we adopt a worldview that is pessimistic, desensitised, sarcastic and fatalistic.

News kills creativity. If you want to come up with old solutions, read news. If you are looking for new solutions, don't.

Society needs journalism – but in a different way. Investigative journalism is always relevant. We need reporting that polices our institutions and uncovers truth. But important findings don't have to arrive in the form of news. Long journal articles and in-depth books are good, too.

I have now gone without news for four years, so I can see, feel and report the effects of this freedom first-hand: less disruption, less anxiety, deeper thinking, more time, more insights. It's not easy, but it's worth it.

That's what the man said. I'm willing to bed that you'll still be reading or listening to the ephemera, or what you can't change, as I do.