Einstein and the electric fence

7.05 AM. The first rays of the sun strike the curtain behind my computer's main screen as I tap this out with my good left hand. I'm grateful that I can now sit on this chair with minimal pain in the area of my sadly abused spine where the compression fracture occurred two weeks ago. So here goes.

Between 4 and 7 AM on most days now, my mind is capable of things it has never been before. It goes to places where knowledge has been stored in my unconscious or deep recesses of my conscious mind for decades. All these doors open without effort.

Probably these things I mull over and link via odd connections make little sense to most people. More than likely they would see what my mind ranges over as an indication that senility is on its way.

But it's not that crazy. It all makes perfect sense (which is what every insane person says about their own point of view). I lie there on my back in the warm bed, almost disembodied, because there's no pain anywhere at all.  Just as long as I don't move, there will be no back-muscle spasms. No yet-unhealed muscle will clamp down on a nerve and cause that involuntary indrawing of breath that chronic back pain sufferers must experience almost all the time.

You people, you chronic pain victims, I sympathise with as never before. I really do. For a mere two weeks I've had a tiny taste of what you feel every day.

So I don't move a muscle as I lie there, and the reward is that state where my mind is freed perfectly from the physical trauma of the past fortnight. 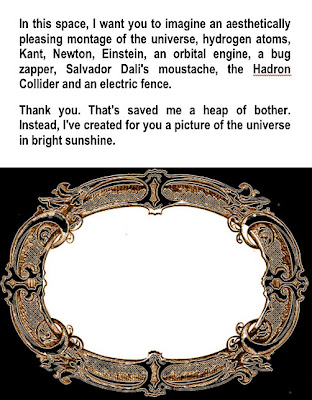 Perhaps that's why I think about the truly free mind, which sets me musing over Hume's A Treatise of Human Nature and his attempt to grapple with the notion of reason and the senses. This in turn sends me reeling in Kant's direction, and how in his Critique of Pure Reason he grabbed Hume's treatise by the throat, adding a necessary new component that exposes the mortal flaws in the ideas of both; hamstrung by the problem the western philosophers rarely acknowledge. That's the failure of words by their very nature ever to give us exact meaning.

Yes, it's more complicated than that, I know. Every Philosophy 101 teacher is now on my back, and I know why. Hold your fire.

Einstein's theories based on a different concept of reasoning blasted both Hume and Kant out of the water, which makes me wonder why whole university courses are still run on them. I have my suspicions. From there I muse over the historical theories on the nature of the universe; how poor old Ptolemy and Aristotle, wrestling with their notions of a universe in which the earth was the centre, had to devise ingenious but awful ways of dealing with the problems this theory threw up. How Copernicus bless his soul rescued the earth from the clutches of geocentric models and stuck the Sun in the centre where it belonged – the centre of the solar system at least, but sadly for him, not the centre of the entire cosmos.

Galileo's marvellous telescope knocked on the head forever any thought by religious leaders that they could retain their geocentric theological hold over science, and Newton and Keplar did their massive bit by introducing the world to something everyone who fell out of a tree knew about but didn't understand – good old gravity. And with gravity seemingly sorted out well enough for the times, the world lived in comfortable ignorance for a while, in a neatly mechanical universe where two plus two always equalled four.

That was, until Einstein knocked it all for six by introducing this horrifyingly new world of quantum physics that was too complex even for him to get his head around – with all its head-scratching implications for us and the entire universe he was trying to cram into his poor old head.

And that led me on to curvy space in the universe warped by a zillion gravitational pulls, and the space beyond that; and going back the other way, the mysterious space with its even more mysterious properties of which molecules and atoms and everything that makes an atom seems to be composed; protons and neutrons and electrons all embedded in their own particular nothingness, right down to neutrinos and preons, quarks and quasars. And the Hadron Collider in its search for the 'God' particle, which clearly isn't a particle as we understand the term but a concept of a particle that will work mathematically better than anything so far.

If there does turn out to be an infinitesimally small solid ball-bearing down there, I'm going to look pretty silly, but what the hell, I don't care. It'll solve a lot of problems if they do, so I wouldn't mind the humiliation.

It seems to me it's pretty much space all the way down, not turtles. That solid cedar table is 99.999999999% or more seemingly empty space, as are you and I. We don't even know that fundamental quantum of pure matter that is us, if it exists.

Which led, as you'd expect, to positives and negatives and their yin-yang balance in the universe, or not as the case may be, reciprocating-piston car engines and orbital ones, and contemplating why that brilliant idea never made it to genuine development when logic dictates that there should not be one petrol or diesel engine in the world of the type we're stuck with now.

I think I know why, regardless of what Ralph Sarich might say.

And my mind flew to DC and AC electricity and how remarkable Alternate Current energy is compared with Direct Current, like they used on Titanic a hundred years ago – about seventy miles of wiring for it, I seem to recall. Can you imagine the North and South Poles of this earth switching their polarity fifty times a second? Positive and negative reversing at that rate?

Things would surely get interesting on the planet, if they weren't already.

So I thought then, as you'd naturally expect, about electric fences on farms, and that it's a good thing they aren't AC but only DC, like the static hit you get off your car in really dry weather – that blue cracking spark that makes you almost jump out of your skin. Or sometimes when Tracey and I kiss in the morning and we're both wearing rubber-soled Uggs, and The Kiss zaps us both.

In winter, we sometimes circle each other like sharks before we commit to The Kiss, but more often than not we forget about our electrostatic potential at that time of the morning. We embrace and kiss, and the kiss can be quite disconcerting, with all the romance of puckering up to one of those pointlessly stupid bug zappers. Try it. I double dare you.

Electric fences. Zap. Get zapped by one of them when your feet have good contact with the earth and you feel like you've been struck by lightning. Well, you have been, in a way. Same principle. You need to experience the jolt in order to really appreciate what I'm on about.

So, that was the way my mind was running over life, the universe and everything after 4 am today. The only omission relevant to this story is that I woke thinking about those electric fences, and wondering if city folk understood that though you can plug the generator for an electric fence into the AC circuit your house runs on, what it's turned into and zaps people and animals is a stream of electrons we call DC. Were it AC, you and any animal who strayed on to it would get fried, and that's not usually the object of the exercise.

Why is any of this is relevant? I'll tell you. I have two little stories to write over the weekend about personal electric fence incidents – entertaining ones I hope. Please join me if you haven't been put off too much by Kant, Sir Isaac Newton, and that other chap. What was his name? Ah, Einstein, now I remember. That tiny little scientist mathematician bloke on whose report card it's claimed his teacher wrote about him, "This boy will never amount to much."

He was always looking out the schoolroom window, living in a world of which his teacher had not the faintest idea. Had I been his teacher I probably would have written something very similar, only a bit more diplomatically in case his choleric mother turned up at my classroom door waving the report card with my comments on it in my face.