Persimmons not to die before


I know, I promised I'd write about electric fence antics this weekend, and here it is Sunday and all, and I haven't. Yet. The vibe isn't quite right, so my apologies about your bitter disappointment. No. I'm going to write about the most beautiful and luscious of all fruit instead.

Two years ago, round May, I was going downhill in terms of health at a slow and steady rate. I looked at the persimmon tree. It was only small, but heavily laden with large persimmons. It seemed very likely that these were the last ones I would ever have the opportunity to enjoy, so they had special significance for me.

In the past, around that time, I had cut whole branches of the tree together with their fruit, and hung them in the garage, where they ripened very slowly but unspoiled by the pecking birds or the occasional possum, as would happen if they ripened on the tree. I'd visit the garage now and again, take the ripe ones, and leave the rest to mature at their own rate, drawing on the last sap from the cut branch.

Tracey picked that entire 2010 crop, and brought them into the house so that they'd ripen more quickly in the warmth, as they do. Much quicker!

The only persimmons I know about are this variety, though there are others. The vital thing about these is that you can eat them only when they are perfectly ripe. Eat them earlier and the juice will react with the saliva in your mouth to dry it out and create a grainy, extremely unpleasant, bitter aftertaste.

I often wonder if people buying them from the shop to try them for the first time make that mistake, rather like the uninitiated do with unripe pawpaws, and get a very bad impression.

I am the only one in the house who eats persimmons. Tracey and Christian aren't keen, and hey, why should I encourage them? All the more of this subtle, elegant fruit for me. [Not quite true; I enjoy sharing them with friends who appreciate the persimmon and its vagaries.]

I revelled in their delicate flavour day by day until they were all gone. That's it, I thought. Carpe the Diem of the 2010 persimmon, and well carped at that.

But with Avastin treatment later that year, the decline in my health was suspended, and at some stage I realised that I might get to taste the 2011 crop as well.

Like those of mice, my plans gang well agley when there was no crop at all in 2011. I'm not sure why. Trees fail to crop for all sorts of reasons I won't go into here.

Disappointing. I didn't really expect to see out the whole of 2011, as the predicted health decline set in once more. Not that I was giving up or anything. Hell no. I was being realistic, going on symptoms and the stats.

So it was with delight that, with the summer flashing by at the insane rate it did, I saw another splendid crop of persimmons on the tree as the 2012 season of mists and mellow fruitfulness descended on the Tablelands. Again, Tracey picked the crop and brought it in. 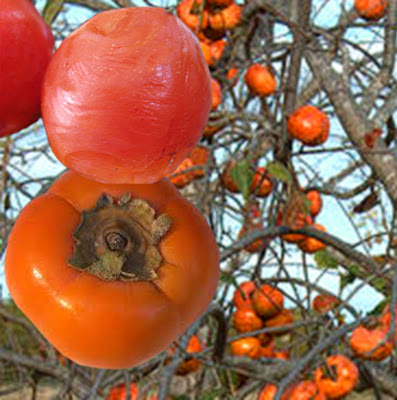 If you are a persimmon virgin, look at these images. See that one at the bottom? Even though the stem is well withered, it's not yet ready. The yellower colour gives it away, and the fact that it looks too firm. But the one at the top now, which looks like a soggy, overripe tomato or a fiendish kid's water-bomb – that's the one. Go for it.

Pull out the leafy top – it should come out easily if it's ripe. Get a sharp knife and slice it in two starting at the gap that's left. Spoon out the contents carefully into a bowl. It could get a bit messy if you aren't gentle with it. Don't worry about the little blackish portion – it's only seeds, and you can eat them. They'll make you highly intelligent and irresistible to ... anyone to whom you want to be irresistible. It's a fact. And they're full of Vitamin C. Persimmons I mean. They're almost as effective as a flu shot, I'd say, but have the flu shot anyway, if you know what's good for you.

Now the good, slurpy bit. Gently turn the emptied hemisphere of skin inside out – over the bowl, if you're wise. The flavour of what's there is the best of all. Make sure no-one's watching [as you may not look your most elegant doing this], and gently suck out the last of the flesh and juice. Discard the skin. Repeat the whole operation with the other half. Do it all again with another one or two persimmons.

Put the bowl of persimmon contents in the fridge. I don't know how you feel about custard, but if you like it and have some on hand, put a tablespoon or so over the persimmon pulp when you're ready to enjoy your dessert. It complements it nicely.