home | WHAT'S NEW! | stories from my past
.
Apparently this is a very old Jewish joke. I must confess that until a friend sent it to me some months ago [Thank you Aaron, via Marsha] I don’t believe I've ever heard it before. But then my memory plays such tricks on me these days that any joke is likely to look new. I guess that has some advantages.

Maybe I should have checked thoroughly in the delightful book by Leo Ronsten, the new joys of yiddish, which our friend Carl Merten gave me some time ago. 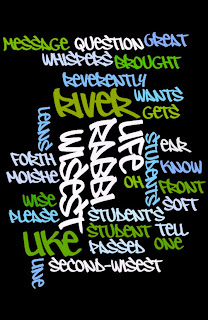 A rabbi is lying on his death bed, and his students are lined up at his side. The wisest student is beside the old rabbi, the second-wisest behind him, the third-wisest behind, and so on, down the length of the bed, into the hall, down the stairs, and out into the street where the simplest student is at the back of the line.

The wisest student leans over and in a soft, reverent voice asks, "Great Rabbi, before you go to be with God, please tell us: What is the meaning of life?"

The rabbi raises his head a little, slowly opens his eyes, draws a rattling breath, and with great effort says, "Life... Life is... is like... a river." He shuts his eyes, dropping his head back onto the pillow with exhaustion.

The simplest student, realizing he has no one to who to repeat this wisdom, contemplates it. After a moment, he taps the student ahead of him on the shoulder and says "Excuse me, but... why is life like a river?"

This message gets passed up to the front of the line, until the second-wisest whispers in the wisest student's ear "Moishe wants to know why life is like a river." The wisest student leans over the Rabbi and again, soft and reverently, he said, "Great Rabbi, your students have brought forth a question! Please, oh wise one, tell us... why is life like a river?"

The old rabbi raises his head again, slowly opens his eyes, draws another rattling breath, and says... "Okay, so it's *not* like a river..."
.