Stories from my Wicked Past: Caned at 6 - [Final!]

[Continued from Part 3]
My fingers hurt and then went numb, but the ordeal had passed.
That ordeal anyway.
I still had another to face; to my mind, potentially just as bad. Maybe worse.
I had to face the unwritten Lore of the Bush – the traditional nexus between parent and teacher on matters of school discipline. The bit that said, if you get caned at school, you must have done something so reprehensible that you can expect strong reinforcement of that punishment when you get home.
For the first time, but sadly, not the last, I was in that unenviable position. How I dragged my feet walking the two miles home that day! Would Jan or Lyn tell on me when they got home? I had done enough dreadful things to them in my sinful past to warrant it. Had either of them done to me the evil things I had done to them - with spear grass darts for example, often thrown at the back of their dresses when coming home from school - I might have seriously considered such a satisfying retaliation.


But as it turned out, it was not in their hands. The body language of a 6 year old – and his siblings – rendered any snitching unnecessary. Yet nothing was said. The silence on the matter as mealtime approached was for me ominously deafening. Things were put on the meal table – foodstuffs I’d normally have been first out there for, down at my chosen spot at the pudding end of the table. Everyone else was seated, ready to eat, Jan and Lyn with averted eyes. I slunk into the dining room, last to my plate. If nothing else, that by itself would have been a dead giveaway.
Food was on my plate. Eating utensils were raised and first portions almost placed on forks when the Sword of Damocles fell.
‘Who got the cuts today?’ asked my father casually. Much too casually….
Had I murdered Brian Koplik, which I had a mind to on many occasions, the effect could not have been different for me if Dad had asked, ‘Who murdered Brian Koplik today?’ and I had actually carried out that cathartic but probably unwise act at Little Lunch.
It was, I should add, a general question about caning that my father often asked at tea-time, out of interest, as the sinner was usually Kelvin Thompson or Brian Koplik. The number of cuts and the victim’s reaction were often explored with a measure of sadistic glee on my part at the meal table, but on this occasion, the question and its timing carried quite a different ambience, even the studied carelessness in how it was asked.
There was a decidedly pregnant pause. Jan had been at the High School in Gladstone that day so she had not witnessed the event. Lyn had, I think, seen the whole thing, and would have told Jan no doubt. It wasn’t something we’d discussed on the way home from school, which for me at least had been a long and silent trudge. But the question had been asked by our father and therefore demanded a response, so there was nought Lyn could do but murmur, ‘Denis did’ - softly spoken words that I remember with great clarity even today.
Not that there would have been any point in her trying to cover for me, for even I was now painfully aware that Pandora’s Box had in any case been sitting wide open since our parents had got home from the afternoon milking; just that I hadn’t yet felt the sting of its former captives.
Dad turned a steely gaze on me. ‘Why?’
‘I talked to Bimbo Brown when Mr Curtis said not to. Well, Bimbo wanted to borrow Lesley Grainger’s rubber and she was sitting next to me, on the other side, so I asked her if she’d loan it to him. Then Mr Curtis came in and I got the stick.’
Before I go on, let me quickly explain, for the benefit of my non-Queensland friends, that what we called a rubber at our school might well be called an eraser in your part of the world. It seems wise to clear that up.
To be truthful, I had no idea what Bimbo and I were rabbiting on about most of the time we were being observed by Old Jim, but it was probably as scatological as usual, we being at the age where anything involving bodily functions was uproariously amusing. I had passed on Bimbo’s request, that was true, and it had been abruptly denied by Carol, the owner of the rubber, but I knew this was not the thing that had incurred the headmaster’s wrath. This abbreviation of the truth under my father’s cross examination simply oozed out of my mouth all too easily, without any forethought at all. But the effect, as far as I could see, was amazing.
‘How many cuts?’
‘Two’.
Dad was normally pretty stern and never in my life would I have disobeyed him, but oddly enough, he didn’t seem as angry at my being caned as I expected. In retrospect, I am pretty sure he was sorry for me rather than angry. The public caning of a six-year old in exactly the same way as a senior high school boy would have been caned was harsh, no matter what the crime, even when it was only the minimum two cuts that I got; but he just said, ‘Next time listen to what you’re told at school and do it! Now eat your dinner and get washed for bed.’  I obeyed with alacrity. Yet the tapioca pudding, usually one of my favourites, unaccountably tasted like cold unpalatable semolina.
After dinner, my mother carefully scanned my fingers to see if there was any evidence of any legacy of the caning, but there was none. I knew she was upset. I thought it was about my misdemeanour, but that wasn’t it, of course. It was the caning itself.
I was upset too. I thought at the time that my deliberate evasion of the full truth had got me off the hook. It wasn’t that. There was never going to be a belting waiting for me when I got home, and the dissembling made me feel more lousy than the two cuts. The caning was, I guess, something of a rite of passage as I was bound to get it at one time or other, but the evasion just made me feel miserable.
Fortunately, the next day was Saturday, and by Monday, getting my first taste of the stick had receded far into the distance. Probably not far enough, because I got it a couple more times from Old Jim before going to High School - each time, well deserved, I have to admit, at least by the standards of the day. I got it only once at High School, but that was a Matter of Honour, and best left to some other occasion, if ever, to relate. 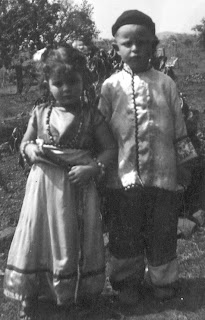 This was probably about the age of 6,
my cousin Beth Brown and I ready for the Fancy Dress Ball,
each elegantly clad in full Chinese battle dress. 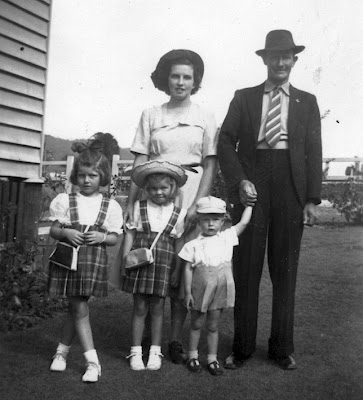 Family off to the Show in Gladstone.
Jan, Lyn, my parents and I. The fact that
Kay wasn't on the scene means I must
have been about 3 - a year before I went to school.
[Back to Index]
Posted by Denis Wright at 9:00 AM