The electric meeting of Carmen and Bella 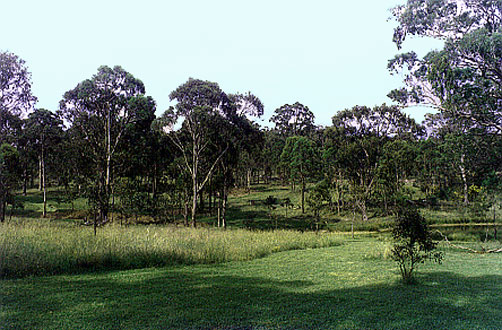 Carmen wasn't exactly a city girl, but neither was she country. She was a town girl, let's say, staying with us a few days, on the 25 acre property we had just out of town.

She was up bright and early the first morning. I was at the shed down from the house where we kept the poultry food and bales of hay for the couple of cattle we had.

"Don't touch the fence," I said. "It's electrified. Just come through the gap between those two posts."

The gap was narrow enough to allow us to squeeze through, but not the cows.

She did so, gingerly.

I went into the chookhouse nearby while Carmen stood near the door of the hayshed, looking out across the paddock. 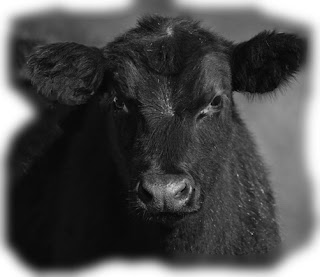 She attracted the scrutiny of Bella, the big black yearling calf. Half Angus, half Friesian, she was. Having taken after her Angus father in shape, she was meat on the hoof.

What Bella lacked in brains, she made up for in brawn, but she did have the wit to notice that Carmen was close to the shed door where the hay was kept. On occasions she had seen me emerge from that door with a biscuit of lucerne hay, which she'd get down into the first of her stomachs at lightning speed.

While I was in the chookhouse, Bella came up the gully and approached Carmen. Bella had hay on her mind, and she didn't care who came up with it as long as it was for her.

I emerged from the henhouse as she stood there, staring at Carmen with an unblinking gaze.

Carmen was unused to cattle, especially ones behaving a bit aggro. She was rooted to the spot.

Bella then tossed her head, as impatient cows do.

"Don't you understand bovine lingo, stupid human? Get my hay!"

Carmen had not the faintest idea what she was to get, and in fairness to her, one couldn't have expected her to, first day on the job and all. First ten minutes, if it came to that.

Bella advanced a pace, snorted a little and shook her head again. Me? I just watched in silence. Bella wouldn't hurt a fly, I knew that. She was a big girl's blouse, really.

Carmen was nervous. She retreated a step.

Ah, Bella's tiny brain computed. I have asserted dominance. I want results, in the form of hay. Open that door and bring me hay. Now.

She advanced several steps this time, and Carmen could feel and smell Bella's hot breath on her face from the metre or so that separated them.

There was an audible crack, and I, standing to the side, saw a blue spark flick from the fence to Carmen's rear. Not even new blue jeans can save you when that happens. Honestly, I never saw that part coming.

The effect was, of course, electric. Carmen gave a shriek like a banshee and bounded forward, hands spread wide, hair like Medusa, wild in the eye. They say some people wouldn't know if their arse was on fire. It must be said that Carmen, quite a smart girl, had no immediate idea what had happened, except that, for a brief moment, she felt that hers was indeed on fire, and every muscle in her body had been jolted by a fair-sized earthquake. Like 20 on the Richter scale, which I think only goes up to about 10.

Bella for her part realised in a millisecond that she had lost the advantage of dominance. At the speed of static electricity or light (whichever comes first), this silent, meekly retreating human thing had switched persona into explosive and noisy attack mode. Bella turned tail and raced at a gallop down the gully below the dam, and up the hill on the other side to what she calculated was a safe distance; then turned and eyed Carmen with both reproach and grudging respect.

Carmen just rubbed her bum and looked at me, not altogether without reproach, although, let the record show, unless I had shooed Bella off just a second before the zap, it would all have turned out the same anyway. She had learned a valuable lesson about cows – and electric fences. In that ten minutes, Carmen, you might say, had been very Bizet.

See, that's what cattle are like, as a rule. They're basically bluff, and you have only to call it and they fold. But I make two exceptions. One is a cow protecting her calf. She'll stop at nothing if she thinks you are a danger to it, but that's true of just about all mothers on the planet really. No surprises there.

The other is a Jersey bull. They're not big and they look fairly mild out in the paddock, but don't rile one up and be within striking distance of his horns, or you'll discover things about your internal organs that you never thought you'd see, nor would ever want to. 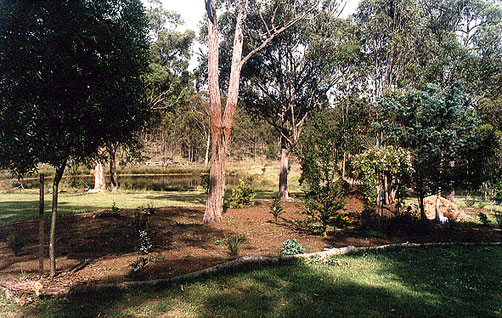