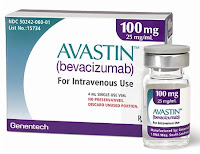 My Avastin infusion came round again today. It happens in a three-week cycle.

The first treatment with this drug was in September 2010, when I was fading fast and expected to die in a short time.
A cannula is inserted into a vein, usually on the back of the hand, and a dose is dripped into my bloodstream. It looks just like I'm having intravenous chemotherapy, but the drug Avastin is what's going in.
It saved (extended, let's be more accurate) my life. Every month, the tumour had been getting more and more out of control, in spite of everything we and available medical science could throw at it.

Avastin halted in its growth, but this sort of tumour doesn't go away. It can only be slowed down – if you're lucky.
A critical test before each infusion measures the amount of protein in urine. If the kidneys can't process it properly, it indicates that kidney function is failing. If that's so, then Avastin will only increase the damage to the kidney, with the inevitable outcome.
Usually it doesn't matter, because the statistics show that the tumour will kill the person before the kidneys fail. But in my case, I've survived for far longer than the norm, yet each treatment brings me closer to the point where what saves me becomes what may kill me by another means. The graph will reach a crossover point, but stopping the treatment will allow the tumour to rebound, with lethal effect.
Before every infusion I had no great concerns about the protein test, as it always registered an acceptable level. That was until June this year. On the last day of May, I fell heavily, and it resulted in a compression fracture of the spine, some bodily bruising and kidney pain.
The next time I was due to have Avastin, the protein reading was unacceptably high. It's measured in plusses.


No + is normal. Protein is being processed.
+ shows some kidney failure, but by itself of no great concern.
++ puts me in the danger zone, and
+++ means treatment can't proceed.

That first reading after the fall was +++. I've blogged what happened as a result (see entry for Friday, 8 June 2012 3:00 PM), but the gist of the story is that the level fell to + and treatment has continued ever since, at that reading.
So you can imagine that each protein test every three weeks, just before the infusion, is an anxious time for me. Not to be melodramatic, it's life or death. (If you think it's melodrama, then sit in my chair waiting for the protein test results come back. It's no wonder that my blood pressure reading is 20-30 above normal when they take it, just before the protein test.)
Today, the protein reading was ++. I had the feeling it might be up.
This meant a decision couldn't be taken by the staff at the hospital but had to be referred to an oncologist, usually mine. He was out of the country and unavailable. In this case, the decision was handed over to a second oncologist who didn't know me.
After a rather excruciating wait, the decision came. The infusion would go ahead. Just as easily it could have gone the other way, probably with the recommendation to conduct urine testing similar to that just after the fall, to see if there was any beneficial difference.
At best that would have caused a significant delay in treatment, enabling the tumour to reactivate further; at worst, a suspension, possibly permanently, of Avastin.
That day will come. There is nothing surer. I'm grateful for the extension that Avastin has given me and I wish there were some way I could help protect the kidney more than I try to do using common sense.
I used to whine when the nurse couldn't find a decent vein first time and had to try a second or third time. She had to today, but there was no whining from me. After getting the nod for the treatment, she could have prodded around for an hour till she got a vein with volume, and I wouldn't have cared about the series of bee-stings.

So, this is my life. Every three weeks, it hangs in the balance based on a simple test, while I live in earnest hope that nothing else unpleasant happens any other day or night.
.
home | WHAT'S NEW! | stories from my past
.
Posted by Denis Wright at 11:03 PM