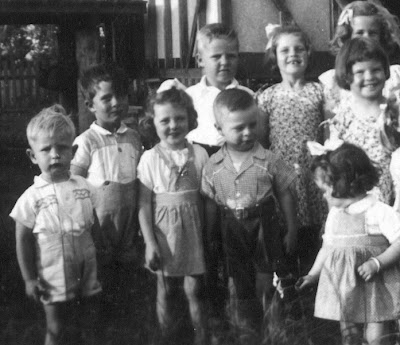 This is part of a larger picture, but I thought you may like to see Bimbo, centrestage in this photo. Needless to say, we were a couple of years older than this when I was lured by him into trying that first gasper. That’s me on the left, of course, looking a bit odd. Next to me is another cousin, Wayne Wright, who terrified me on that day by pointing out to me that the star on his capgun proved it had real bullets in it and he was going to shoot me, and he chased me round the outside of the house several times before I hid in the bushes to escape certain death. Being forced to break cover for a photo and having to stand next to the would-be killer may explain that look on my face.
Next to him is our dearly loved cousin Noela Brown, who died tragically from a tetanus infection not very long after this photo was taken.
Centrestage and right next to her is Bimbo Brown, looking at Noela’s sister Gay. They were first cousins. Behind Bimbo is Lloyd Brown, from yet another branch of the Brown family, who became a pilot. Jan, cheerfully minus tooth, is next to him, and Lyn is beside her. Behind Lyn but half hidden is Judy Wright, the very pretty sister of ‘death-threat’ Wayne; she could sing and dance and probably ended up in a chorus line somewhere.
A final footnote to the story is that by the end of the photoshoot, Wayne had forgotten all about his death threat, but I surely hadn't. I found the capgun on the tankstand and threw it in the dunny. No-one with murder on their mind should have been allowed to have a weapon like that, and though I coveted it with its bright red star, my civic duty [and strong instinct for self preservation] gave me no option but to consign it to that fate. I can imagine Bimbo’s father’s face when the gun emerged from the pan, as the well-digested remnants of the stomach contents of all Calliope township were merged in a very large hole out of town somewhere.