Have a look, if you will, at the above diagram. Tracey found it here and I have to say, it's perfect for describing what has happened to me since that first day.


This image shows the very part of my brain affected by the tumour and the seizures related to it. I am far from an expert on the anatomy of the brain, but I do have an idea how this relates to my situation. It also makes me aware of how unique each case is while having characteristics in common with others, and how right my instinct was not to try to talk about these things till I had some confidence at least that I knew a bit about it - enough to relate to my experience.


My additions to this diagram are very crude and not exactly to scale. I could do better if I had the use of my right hand when using Photoshop, but it will give you an idea at least. Below is where the tumour was located when I first became aware of it. It is in the left side of the brain so we are talking about how it has affected the right side of my body. 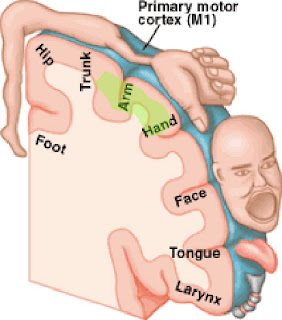 See how the hand and arm were affected first. That's where the most damage was done to the connections between brain and body, and the places where most remedial physiotherapy is required.
The craniotomy removed as much of the tumour as possible, but there were limits to that. Over the months of radiotherapy and oral chemotherapy earlier this year in Melbourne, the tumour was attacked by these treatments. An MRI established a baseline to check the progress of the tumour in July. Another one two months later showed that the yellow area in the diagram below indicated a continued growth in the tumour and inflammation around it. All these diagrams are misleading in that they don't show the very large area of brain affected by serious inflammation. 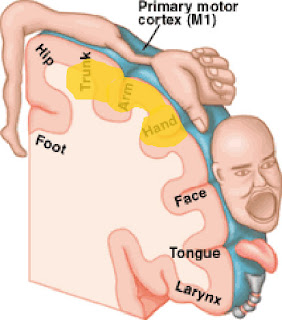 I haven't shown the area of inflammation [a by-product of the partial removal of the tumour and the radiotherapy] on this diagram but it was considerable. Inside the yellow area was and is, almost certainly, dead tissue, the result of the radiotherapy. That seems reasonably stable and surrounded by a wall of thick tissue, behind the active tumour wall itself. The active tumour wall's expansion destroys brain tissue and the associated inflammation together produced the seizures once or twice a week, each time doing more permanent damage to the neural pathways getting messages from brain to body.
Notice too how the tumour was extending into the Trunk area. That produced an additional seizure area in my body - very unwelcome as you may imagine. Over weeks and months between June and September, this area of seizure expanded, and with it, the area of inflammation of the brain. 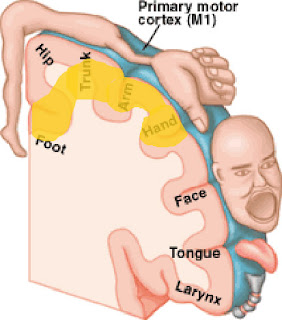 Once the ankle/foot became affected by the seizures, mobility was seriously affected. In August-September, the area of tumour/inflammation increased, spreading to the hip. This is just a slice; you'd need to see it in 3D and not just a slice to become aware of how much of the brain was/is affected. 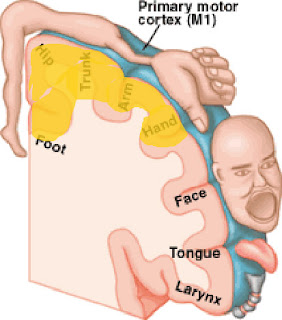 It was the lowest point for me to this time, psychologically and physically, mobility reduced to using the doorways for support in walking or wheelchair outside. This was when we started with steroids to tackle the inflammation causing the increasing number of seizures and the damage they were causing. This produced relief but offered no hope of slowing down tumour growth in the longer term.
This is where Avastin has come in. By stopping seizures through tackling inflammation and possibly, tumour growth, much more mobility is possible and retraining of brain to tackle upper body is possible. Well, it's happening, but for how long and how effectively, we don't know. All we do know is that the seizures have to be kept at zero to continue any improvement. As I  write this, it is 8 weeks since the last one. Thank you, Avastin!
Finally, looking at this diagram, I can't help but think how lucky I have been in one way. Look at the diagram again and see what's affected, but look especially at what could have been affected in the past 10 months - face, tongue, larynx - and that's only in this diagram! Other parts of the brain could be much worse - not that I have no risk of that happening in the future. This is just the motor area, left side of brain, and I retain full use of my left hand [my dominant one!] and my rationality. Things could be much worse.
So far, so good.... let's see what the MRI next week shows.....
Posted by Denis Wright at 8:48 AM