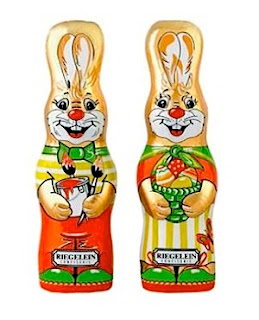 A dear friend invariably gives each of us an Easter Bunny of the species rabbitius cuniculus chocolatus, tastefully tinsel-coated as you see here.

The joke is that we give her one of exactly the same species in return. It's triple treat in our case, but she fares badly in the exchange, getting only one for three. She doesn't seem to mind. I suspect her generosity outweighs by far her dollar mathematics.

She doesn't know, I'm afraid, the size of the dilemma she causes me. Humans come in only two kinds: those who cannot bear the sight of uneaten chocolate, and the rest of us, who seem relatively few in number. We are happy to pick away at something chocolately bit by bit over weeks, invoking a radically different law of human choc dispersal from those with zero self-control.

“Happy families are all alike; every unhappy family is unhappy in its own way.” So begins the beautiful Tolstoy novel, Anna Karenina. Our family fits perfectly into the first category most of the time, but when a household is composed of both chocoholics and people of restraint and propriety, a gaping chink in the family armour rears its ugly head, if you enjoy a spectacularly mixed metaphor. One that could lead to a loss of family amour.

So it is that certain family members take their Easter goodies deep into the burrow and gorge on what is on offer until only the tinsel remains. This is not a long time, but it pleases them.

But the other (singular!) one is content to eat one little egg at a time, or part thereof of a full-grown member of the cuniculus chocolatus species, and leave my Easter goodies until the time of a sudden whim, possibly weeks later.

It stands in its glory in full view of all, on the desk, smiling happily at the certain prospect that it will be taken suddenly at some point and decapitated - or at least completely deafened - and the remainder of its corpse broken up and consumed in equal measure, more or less, by the entire household.

Look, I don't mind sharing my chocolate, not in the least. It happens every time and it gives me a warm fuzzy feeling. The problem is that my rabbitius excites ... feelings ... on behalf of a nameless other, who looks with covetous eyes on my bunny long before I am ready to dissect him.

I do not want to be the cause of this sin of envy, but at the same time there used to be a moment - a precise and mysterious moment weeks after Easter - when the fancy took me, and the deed was done, starting with the biting off of the ears ceremony.

In the end I forwent (?) this moment of pure selfishness and with great care, bore my bunny out to the lounge, in all his tinsel glory.

'It's time', I said. 'He doesn't quite know it yet by the ridiculously delighted look on his face, but he's cashing in his chips. Or I am, on his behalf.'

Beloved affected delight and joyous anticipation, though I know she was really thinking, 'It's way past bloody time, if not his Use-By Date. Let the sacrifice begin!'

But on this occasion, as I carry him out carefully by the waist and present him for inspection, a look of horror comes over her face.

'What's happened to the back of his legs? Why is he completely devoid of an arse?'

Puzzled, I turn him round, and discover that the question is a fair one. Although from the front he is a model of entirety, from the side and rear I see for the first time that his back side, right from gluteous maxima to heels, is no longer extant.

There is only one explanation, apart from a scurrilous and unworthy one; namely, that Beloved has snuck in on some occasion and surreptitiously committed a grievous assault on his person. I reject that one immediately because her amusement and surprise are too real, even for the seasoned actor that she is. The look of amazement on her face at my standing there believing I have an entire bunny in my hand, and not one that has been interfered with, is too genuine for any foreknowledge of the circumstances.

So I go back to the study and examine the scene of the crime. It is all too obvious from the little calling cards. A sticky-pawed but highly intelligent mouse has been sneaking up nightly to my bunny's rear end, and with extraordinary care not to destroy the illusion of rabbitius intacta from front view, has been feasting on his body, starting with his Achilles heels.

Not only that, but rodentia musculus has a degree in physics and mathematics, for s/he has eaten in such a way as to retain his upright posture and perfect balance for the entire time.

We figure a mouse that smart can't be all bad, and a good 70% of the bunny is still in its pristine, smartly wrapped condition. Necessity is the mother of not worrying too much about trifles, so the bits shared with musculus are removed, and the remains of my rabbitius cuniculus chocolatus are despatched to their final resting places, so to speak. In our stomachs.

'See? That's what happens when you don't eat your Easter Bunny at the right time!!'

Leave me alone. All I know is when a box of chocolates the size of a shipping container is opened at the Hocking family's gatherings, it's like the sharks are circling, and if I don't get in on the feeding frenzy along with the other White Pointers, that's it. I just get to smell it, if I'm lucky.

When we were little, we considered ourselves fortunate to get one MacRobertson's snack bar more than once a year, amongst six of us, and that had to last a fortnight.

Tell that to kids these days, and they won't believe yer!