Armidale's trees are colouring nicely. The claret ashes are turning from deep green to that of a rich cabernet (I guess I should say 'claret'!) and along what used to be the old highway to the south, the tall poplars are a distinctly shimmery-golden-green in the breeze from the west.
I can see these things clearly on our walk now, but it's as though it's for the first time. Why? Because I have abandoned pride. Not pride in the positive sense, because I still have enough of that, but vanity. Vanity in this physical sense at least.
Let me explain. As I related in some detail in an earlier posting, which I am vain enough to think you might read if you haven't already, I now have more trouble walking, because the right leg is not getting the same motor signals from the brain as the left. I also have an increasingly troublesome issue of general balance.
In fact, there are two postings on this subject; the first, a brief one from September last year with 'coming of spring' photos Tracey had taken on the way round. This one had faded from my memory. I'm shocked now on reading it at how much greater the walking problem has got compared with six months ago. Things creep up on me. 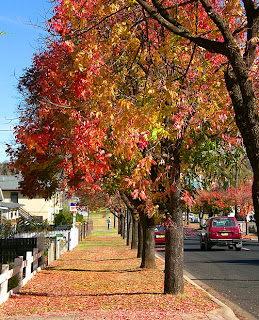 The second entry, which was what I was really recalling, was from just last month. I thought I'd written it earlier than that, but my perception of time these days is weird.
As I said in that February posting, this means that I have had to focus deeply on the mechanics of walking, looking just one step in front of me at a tar road or concrete path while we pass the urban beauties of nature by.
" [Taking Tracey's arm] is very steadying," I said, "but it also fosters dependence. It gives me a false sense of balance." I am indeed much steadier when I take Tracey's arm and there's logic in trying to retain independence.
BUT as the days go by, and as balance declines, the sheer mental effort of holding so many 'walking' arts in mind becomes too much. 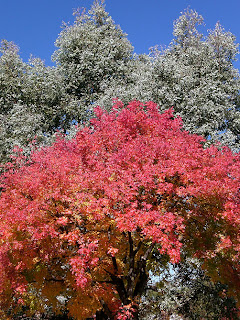 Finally I had to admit it. When I took Tracey's arm, to walk the regular paths and not just street corners or obstacles or young women with twins in strollers coming the other way, everything became that much easier. I could relax, and with that, walking itself became easier and less exhausting.

I could look around and see what was happening. We could talk if we wanted to, not that we always do. Neither of us is the sort of person who demands that silence be filled with inconsequential chatter. We feel no need to entertain each other every second we're together. Just being close when walking can be enough, and the unspoken words may be more important than those that come out of our mouths.
The reality is that for the past few weeks I had been fighting against pride, but not the healthy sort. I mean the ornery soul-sapping kind that makes me irritable and frustrated with myself and, no doubt, irritating to others when it surfaces.
So in the past few days, walking has become so much more enjoyable (for me at least), as it becomes more natural in the ways that really matter. It may not look graceful, this guy clutching a young woman's arm and stumbling occasionally, but I don't stumble anywhere near so much. I arrive home less exhausted. I can put in the effort where it is required without fear of spearing my nose into the concrete or shattering a few rather important bones.
Pride is fine. I just have to draw the line between it and vanity, and not look on unavoidable dependence as public humiliation.

That, my friends, is a bloody sight harder than it looks when I've spent 98.46% of my life standing - and walking - on my own two pins.
(Autumn photos by Tracey)