Reporting to the oncologist

home | WHAT'S NEW! | stories from my past
"I'll give the clinic a ring and see if they're anywhere near schedule,' said Tracey, knowing that, if we're punctual, there's usually a fair wait to get in.
She was told they were right on schedule. I was a bit skeptical, but we got there, right on time, and lo and behold, there were very few people there; a bit miraculous for a mid-afternoon appointment.
We were ushered in. Pam, the head of the Oncology unit at the hospital, was there to take notes as usual, because what the oncologist says affects the treatment at Oncology.
"I'm very pleased to see you," said he as I limped in, me silently cursing my leg for not cooperating in letting me put on a good show for him. "Very pleased indeed. After four months, I'm delighted."
We both knew what he meant. A lot of patients with my condition don't make it back, or if they do, in a much worsened state.
He'd been going through Pam's notes she takes meticulously every three weeks, when I get an Avastin infusion at Oncology.
I always do a written report on how I feel things are going with me. It's a little light-hearted, but it serves some useful purposes. From his point of view, it includes the answers to many of the routine questions he would have to ask. Not all of them, but most of what he needs to know. He reads this through and in less than a minute knows the score pretty well.
From my point of view, it makes me think carefully about what has happened in those four months, and it's astounding the details I forget since the last consultation, until I go back through my blog diary.
A now memory of the last four months can be quite skewed. Time becomes pretty stretchy, and events may be falsely compacted. Mostly I forget things that happened.
He smiles when he comes to some bits. He looks at Tracey, and asks (as he does each time), "Did you help with this?"
She hasn't. I don't want her to, because I also have a second purpose in my "report", or "homework" as I often call it. I want him to get a picture of my state of mind. What I can do and can't. What I think is important.

Hell, let's come straight out with it. Whether he thinks I'm going gaga.
"I don't quite get the purpose of the last bit," he says.
"It's just to show you that I've been trying to see if there's a pattern to the seizures. If they relate to when I get an Avastin shot, and how far apart the seizures are."
He's not surprised there's no correlation. He didn't expect it. As we both know, the variables are huge.
"One thing I wanted to ask you. Tracey and I have been talking about this. I started with oral chemo and ended with intravenous. From what we can make out, we doubt the chemo made a bit of difference. Not in a positive way, anyway. What do you think?"
He disagreed. Fair enough. He's treated many with this illness; mine was a sample of one. Me.
"It's possible that it may not seem to make a difference in some cases, but there's good evidence that it does help with some people. You just don't know. That's the thing. It's the same with other drugs, including Avastin. It doesn't seem to make a huge difference for one group, unlike in your case, where it's certainly helping to keep the oedema at bay as well as containing the tumour."
"In your case, it's performing remarkably well. You surprise me each time you come in."
I'm gratified, as if I personally invented the treatment that keeps me hanging on.
"We know things can change quickly, but it's obvious what we do from here on."
"Yes," I say, "We don't rock the boat."
"Exactly. Do what you said on your report, about sleep, diet, exercise.... I'll see you in three months. Touch wood all will go well till then."
He did indeed touch the wooden table. He knocked it hard, in fact.
I was glad he added that little bit of superstition, so dearly held by me.
So, here's my report. And my head is getting whoosy as blazes, so even though it's now 5:10 pm, I better have a sleep. Forgive any errors - I'll re-check it later and find loads no doubt, but having sat here and done this, let me post it.

Oh, I see I've said 2012 in one of those dates at the end, which timewarps us to Christmas this year. That's clever. I'm not redoing the graphic though. I'll be a Timelord instead. Dr Me, that's Who. 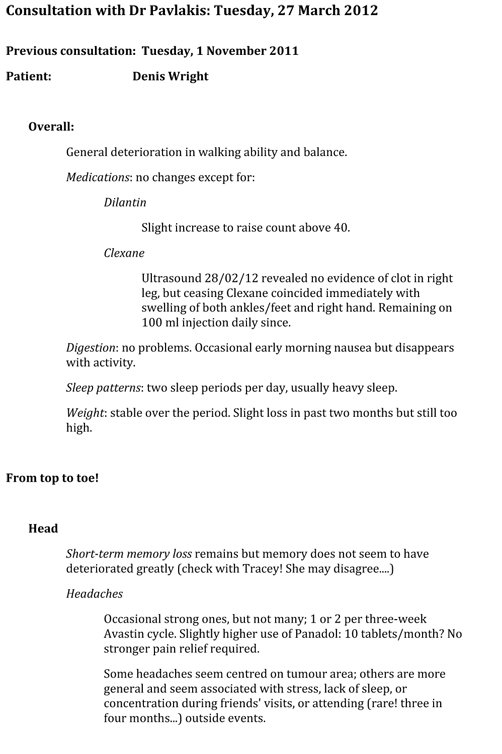 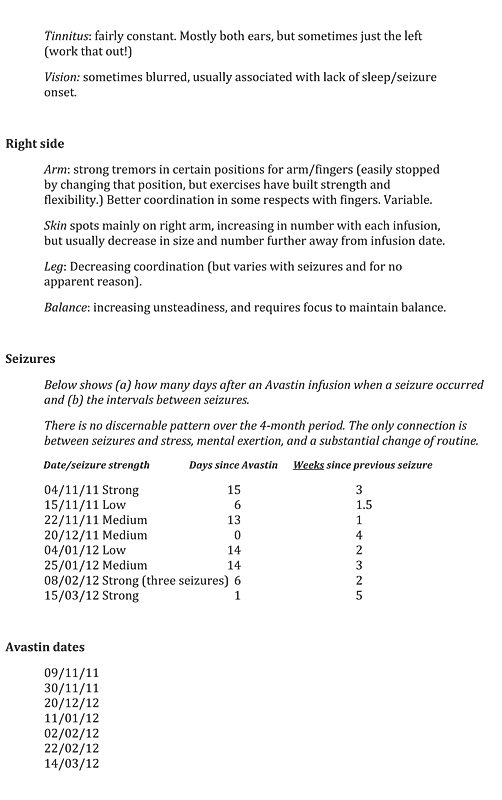