home | part 1| WHAT'S NEW! | stories from my past
From Part 1: QU was radical because Queensland had the most repressive and compromised government in the country at the time, with Joh Bjelke-Petersen becoming Premier in that year. Say no more….
There were four notable firebrands on campus in 1968; Brian Laver, Dan O’Neill, Dick Shearman and Jim Prentice.
Ah, so much I could say here about these guys, but let’s stick to the main story. As early as 1968, events in Vietnam were turning from bad to worse for the US and the rest of the partners involved in the Vietnam enterprise. Not that the papers told us that. We were always killing scores of Viet Cong, apparently, and it would only be a matter of time before they would be driven out of Indo-China altogether.
So we were told. Driven out of where? Their own homeland? Dream on….. 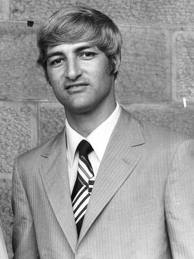 There were lunchtime meetings and rallies over the microphone in the Student Union courtyard that you couldn’t avoid if you went to the Refectory for lunch, and usually it was one or more of these four 'radicals' doing the haranguing. There was some fiery debate. I remember Bob Katter, then president of the Young Country Party, doing battle with them, not very successfully. There were plain clothes cops constantly on campus. There were several other activist groups operating simultaneously in favour of women’s lib, legalisation of various drugs, and alternate lifestyle choices of one sort or another. Hippiedom was just around the corner; in fact, for a few, it had already arrived, or some of it had. 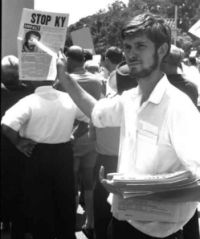