The Man from Porlock and the Pillow Book 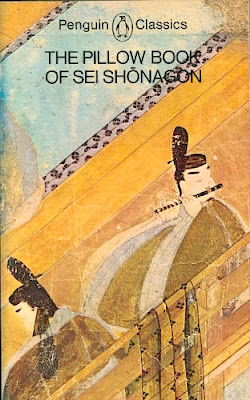 One of the most enchanting pieces of world literature easily accessible in English translation is Sei Shonagon’s the Pillow Book. It was written a thousand years ago and remains one of the most enlightening pieces of Japanese literature for the rest of the world.
It’s a diary, pretty much. Its attraction is that quite a lot of it is simply a series of lists, and you can access the Japanese mind through these lists.
You could get an even deeper appreciation of the Japanese mind by reading Lady Murasaki’s the Tale of Genji, but the sad truth is that this Jane Austen-ish novel of over 1000 pages in English is just too much for most people, and like much of the world’s great literature, far many more people claim to have read it than actually have.
It’s a bit like Salman Rushdie’s The Satanic Verses in that respect. A friend of mine who works at the Town Library says Rushdie’s novel is the most often borrowed and most quickly returned book in the history of the Library, with the first few pages thumbed and the rest of it pristine. Pity. It’s a fantastic piece of literature, but pretty hopeless if you don’t know anything about India or Indians or Islam.
My point in mentioning the Pillow Book is that I think I am going to adopt much more of that style; remembered snatches of things, writing it as Peter Ustinov did in the spirit of his reminiscences, to ‘Dear Me’. What a perfect title he chose for his autobiography. What a brilliant man.
Funnily enough, the thing I remember most about Dear Me is that when he joined up to fight the Germans in the Second World War, he chose the Tank Corps. His logic was that if he were involved in any battle, he was going to do it sitting down.
Maybe I’ll even intersperse my jumbled thoughts with some of those from Sei Shonagon, so any effort to read this stuff won’t be entirely wasted.
Oh, one last thing for now. There's a movie by the name of the Pillow Book. It bears little if any resemblance to the diary by Sei Shonagon, so don't be fooled!
Posted by Denis Wright at 8:24 AM