My nephew, Glenn Stockwell, is Professor in Japanese Applied Linguistics at Waseda University in Tokyo. (That's right, he teaches Japanese students about their own language!)
A few days ago, he and his wife Esther took a train trip out of Tokyo and while travelling past Mt Fuji, he photographed the famous mountain from an unusual angle.
But it wasn't the angle that got my attention; it was the wisps of smoke puffing up from the crater. This happens from time to time and usually indicates there something unusual going on down there in the bowels of the earth.
Last week, Glenn sent this picture to his mother, my sister Jan, and she passed it on to me.
I couldn't help noticing that the clouds looked eerily like a skull, maybe with a bit of hair hiding the ear, the 'mouth' also blowing a wisp of smoke as well, and I remarked on this two days ago to my sisters. 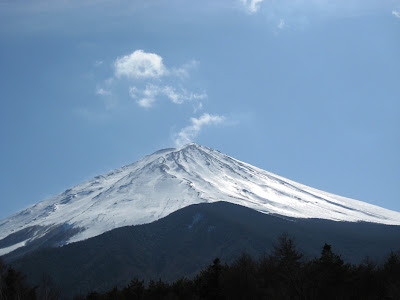 In the ancient chronicles of Japan, such as the Nihongi, the islands of Japan are all children of the deities Izanagi and Izanami, and the story of the birth of these islands is a fascinating one. With the massive earthquake and tsunami of 11 March 2011, maybe the venerable mountain, which hasn't erupted since 1707, was sending out a warning that something big was going to happen!

As a footnote to this story, Glenn and Esther were going home by train yesterday afternoon when the earthquake struck, and their experience, like that of thousands of other commuters, was that the train stopped. After a long wait they decided to walk the five km from where the train stopped, and made it to their apartment. Jan just wrote to me a description of what they found when they got there.
They then walked up fourteen flights of stairs to their unit before finally reaching their front door - as all the lifts were closed down.  Inside was a bit of a mess.  Their fridge had been moved about 30cm out from the wall and the door was hanging open with a lot of the contents on the floor.  They were amused to find their eggs still unbroken in the fridge – but cheese and other foods were all over the floor.  Cupboard drawers were open – and things had fallen over.  They were unable to get into their bathroom because a large drawer had jammed open against the door, so there was a bit of drama there until Glenn, ever resourceful, managed to get one of his swords through about 5cm of space and move the object that was stopping the drawer from closing.  Their TV was still safely attached to the wall – so obviously the person who installed it did so with earthquakes in mind!
They are still experiencing regular aftershocks, and probably will for some time to come.
Let's hope the earth settles down again and gives Japan the time it needs to deal with the immense task ahead. And let's also hope that Mt Fuji needs to give no further warnings for quite some time at least!
Posted by Denis Wright at 1:25 AM