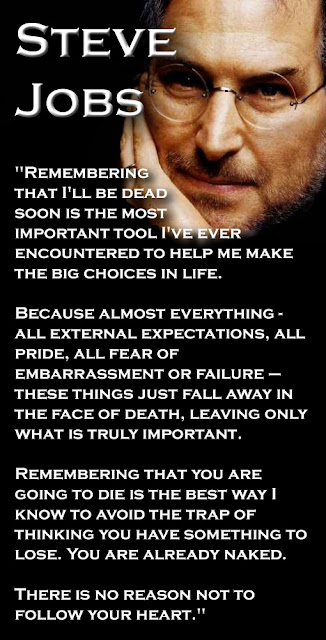 Steve Jobs is likely to die soon.
In dollar terms, Apple is worth more than Microsoft and Dell. Its capitalisation stands at $340 billion. It and the oil giant Exxon are the same size; the two biggest companies in the world. Apple is now worth as much as all the Euro zone banks combined.
Steve Jobs was the visionary who led it to this extraordinary spot.
I can well understand you don’t want a history of the Apple empire, fascinating though it is, but Steve Jobs, the man, interests me mightily.
He went about achieving success the opposite way the textbooks said he should, but he did so. He never market-tested; he engineered a product that was so far ahead of the game that market-testing would have been a failure - items “that consumers never really knew they needed – until they were launched and became indispensable.”
It is the supreme irony that a man with so much to give, with all the financial resources in the world, faces the same problems staying alive as anyone else. He is nearly eight years younger than I. I don’t think he was a humble man, because humble people don’t survive in the cut-throat world of gigantic corporations, but his humanity shines like a beacon.
How unlike Shelley’s vision of Ozymandias, the haughty Pharaoh Ramesses; and yet, in the end ... how different is the result? Perhaps the contribution of Steve Jobs to the world will be greater - far greater - than that of the mighty Pharaoh.
I met a traveller from an antique land
Who said: ‘Two vast and trunkless legs of stone
Stand in the desert. Near them, on the sand,
Half sunk, a shattered visage lies, whose frown,
And wrinkled lip, and sneer of cold command,
Tell that its sculptor well those passions read
Which yet survive, stamped on these lifeless things,
The hand that mocked them and the heart that fed.
And on the pedestal these words appear --
"My name is Ozymandias, king of kings:
Look on my works, ye Mighty, and despair!"
Nothing beside remains. Round the decay
Of that colossal wreck, boundless and bare
The lone and level sands stretch far away.’