Boat people and other boat people

It was a tough night on the wards, though that wasn’t unusual. There were people to be treated, but medical staff have to break for a few minutes in a shift, or the chances of making mistakes increase just that bit more. Never enough staff, never enough time.... Nothing’s changed in the twenty years I’ve been here, no matter who’s in power in Canberra. No wonder my hair’s grey.

He hunched over the table for a moment or two, then went to the fridge and extracted a small container of food, which he placed in the microwave oven. From a sachet in his pocket, he made a cup of passable coffee, sighed and sat down again.

The silence was broken only slightly by the entry of a young woman, slight of build and as weary as he was. She’d been his partner round the wards, or one of them, and though she still had a lot to learn, he’d taken an instant shine to her. It was a face of intelligence and dedication, but very pale now. They’d never had time to talk. Consult, yes. Not personal stuff.

She sat down opposite him.

‘Better than the muck in the canteen. I have another sachet. Do you...?’

‘I couldn’t. I bet you were saving it for later. Oooh – the smell of those noodles....’ she stopped abruptly, fearing he would also offer them.

‘My wife packed me that. She’s good. Real prawns, not the tasteless peeled ones you can buy in the supermarket! Have the coffee sachet. It’s the only decent pick-me-up you’ll get all night. And look - there’s enough to feed an army here. Or at least enough for one starving Vietnamese and one little Afghan. Have a little. Please.’

The offer was too good to refuse.

‘Is it Afghan, or Afghani?’

‘Who cares? You and me, we’re both Australian anyway. Though I’m neither of those ethnically. My origins are Hazara. Or Hazari. Take your pick.’

‘Ah. I know a little about your people. A sad history in Afghanistan. You’re Shi’ite Muslims?’

‘Yes. Though no-one knows all that much about our origins. Persecution is why we escaped. Even now, after all this time, if we returned we wouldn’t survive a week. I don’t talk about it much. It’s too painful for me, nearly ten years after we fled.’

They sipped their coffee.

‘We’re going to have to go back in to the wards in a minute. What about you?’

‘My dad was a pen-pusher in Saigon in 1975. Well, an important one. That was the problem. We couldn’t have stayed. We arrived in 1981 after being stuck in various parts of Southeast Asia. We tried all sorts of ways to get here. By boat, like you. I was just a kid. And if we’d been forced to go back, we’d have been dead too.’

‘1981. The Soviets were killing my ancestors then in Bamiyan. The Taliban wanted to wipe us out, totally. Remember how they blew up the giant Buddha statues there later on? The Americans then carpet-bombed our valley and turned it into rubble. Those who survive are persecuted terribly by the Sunnis. We haven’t been all that lucky in the past.’

‘I understand. But I guess we better go back out there and face the multitudes. One last thing - how hard was it to get refugee status? We had quite a battle convincing Canberra that the Vietnamese weren’t going to overrun the country. It’s better now... a new generation... a different attitude - though it’s not perfect.’

‘Refugee status? Very hard. We had no papers. We lost what money we had ... to all sorts of people. They sent some friends back, after all that hardship, only to be murdered. We were Muslims from Afghanistan, they said, jumping the imaginary queue. Go back and apply properly for immigration. Apply where? They had no idea. And they thought we were going to overrun the country as well!’

‘We really must get back to the wards. Let’s start with one of the good ones. Mr Kazantzidis first. He’s a nice old bloke. He tells me he was a kind of boat person too. He came in the sixties as a kid and his father worked on the Snowy River Scheme, and they came by ship.’

‘I don’t know about this Snowy scheme. But he talks a lot about football - and cricket. His son used to play cricket for New South Wales, he says. He also said you know more about his blood than anyone, even from Transylvania. Then he laughs. I’m not sure what that’s about either.’

He looks at the list in front of him.

‘...then Mrs Sutton. She adores you. You know, she was a boat person too. She arrived from England with her family even earlier that Mr Kazantzidas. Ten Pound Poms, they called them.’

‘She’s like a grandmother to me. I never had one. She’s so frail... I’ve become too attached to her.’

‘You’re young. You seem to have lost many family members. It’s par for the course that you might get too close to a patient. And then, we have a string of other boat people to fix – the ones whose ancestors came here in dribs and drabs after 1788.’

‘Most of them are fine with me unless they find out I’m from Afghanistan. I’m not going to hide my origins. My people are proud of how they’ve survived in spite of everything.’

‘It seems to take a generation and then you’re OK. You have to be patient. Maybe you have to wait till a new refugee group arrives and becomes yet another new threat to the Australian way of life, and we can all complain about them! Now pick up your wallet and let’s go. But tell me, who is that in the picture there? Your daughter?’ 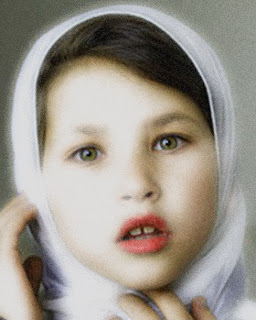 ‘No. I was widowed just after we were married. This little girl is Hazari... the daughter I would like to have had. Or my sister as I remember her, but I don’t have any picture of her.'

'It’s an image from The Kite Runner. It’s a beautiful movie starring my people, in a way. You probably think I’m crazy to carry around such a thing.’

‘No, I can understand why you like to have the picture. I don’t recall that movie.’

‘It’s quite old now, I think – well over ten years. Why don’t you bring your wife and family over and try some of my food?’

‘Great. Next Saturday, after the game? The Swans play Carlton. It should be good. Here we are, the Year 2020, and we’re heading for the Finals.’

‘I can’t say I’ve ever understood that game, though my Dad loves what he calls the real football.’

‘We can’t hang round here any longer. We have a lot of people to attend to – most of them descended from boat people one way or another - maybe even that Aboriginal chap with the football injury.’

‘The boy with the beautiful body? What would our country be without boat people?’

‘A hell of a lot quieter round here. That’s what it would be.’