This is in response to the comments on this posting. (New window)  It turns out that Blogger refuses to accept something this long as a comment on another posting. OK, so be it.

Monday, 4 March 2013  This posting continues to attract wide interest, or seems to. Already the game has changed quite a lot since I wrote the comments below in October 2011. Murdoch survives, apparently with no difficulty. Paywalls can work. My only question is the nexus between these two. If we accept paywalls, will we get quality while proprietors dictate the content? Paywalls are not the only option. There are other successful models.

The comments themselves are here. (New window)

Dear Red Witchy: I used to feel exactly as you do/did about paying for content. Never, I thought, would I do that. It's online.... it should be FREE!

Although that's what we've got used to, it's a weak argument. I really do have a big concern about how to support high quality journalism in the same way as I have one about supporting high quality academic research. Are we to get every idea and scrap of information from Wikipedia?

The quality items on such sites depend on what's provided by the remaining genuine researchers, and if they are not paid adequately to support their research, we'll end up with mediocrity, at best. Wikipedia is the democratic view of what's 'right', and though an admirable thing and very useful, it's not designed to support opinion that isn't mainstream. There are no Einsteins or Hawkinssss(?) there, and they are the ones who changed the world.

The world-changers are on Wikipedia only as entries, not as contributors.

So we must support original research and journalism or be prepared to put up with recycled mediocrity.  As to the Bolts of the world, the more controversy they generate, the more influential they become, but given enough rope, eventually they hang themselves.

The wounds inflicted by poor quality, lazy opinion pieces pandering to ignorance and prejudice will fester away, but if we don't have quality opinion paid for and published to counter them, then we leave the field to them.

Don't let me get on to that subject!

Dear Zoe, you always have something delightful to add! The KV excerpt is a treasure. And, of course, he's right. The nail has been struck bang on the head. May all humans who have the freedom to do that go and buy their envelopes, and see what flowers (literally and metaphorically) are blooming on the way.

Sadly, as you will know better than most, some of us have to walk or ride down to the shop via our computers. Now when I really walk, 90% of the time I have my eye fixed on the place I'll put my foot next, or else I'm likely to fall. Not that I don't get the most out of my 10%.

But most of the time, my fingers do the walkin'.

Unfortunately, it's the fingers of just the left hand. If I bought a newspaper and sat in the Mall here to read it over a cup of coffee, I couldn't even hold it, or turn the page. The cup of coffee would soon be over the newspaper. I can't hold a book and read it except with much frustration.

But the Vonnegut principle still prevails for me, as far as possible. That's why I choose people to follow on Twitter whose views I don't always like, or are quirky, or hit me with a different view of the world. These are the people I'd like to meet out on the street or chat with à la Vonnegut mode.

That's brings me back to the point. Fortuitously, and ironically, the intellectual world is heading right in the direction of catering for people like me, away from the printed page and on to the iPâd or Kîndle screen. (The diacritics in those two brand names are there to try to avoid spãmmers!)

My much-loved books sit there in the bookshelves. There's a vast revolution, or revolutions, just beginning, and I can only imagine where it will end up. All I know is, if I were to be part of this world in the longer term, I'd be fighting right now to preserve the existence of two very endangered species - the real journalist and the real scholar.

Jim: many thanks for your valuable contribution. The things that really struck me in what you said related to these:

Paywalls. The problem you mentioned is that effective paywalls may be too expensive to administer. That makes sense but I'm not convinced entirely. I know that there's a vast hidden cost in all journalistic enterprises but the day of the media magnate is ended. Ending, then. Murdoch guaranteed the collapse of that model with the events of the past few months. There have to be new models. Old ones with morph into something else or die. The new models are being developed, come what may. It's evolution as much as revolution. Evolution at a great rate....

Advertising. The ballgame has changed and will continue to change faster than any large organisation can catch up with. Strategists, in desperation, are sprinkling ads right through body text, or pop up over text. People are not going to put up with that unless they are desperate to read what's underneath. Many aren't that desperate. I wouldn't bank on people getting used to it.

The Huff Post is an exception because as you said like most news aggregators its news is recycled or free. It did well at the beginning and still does. It was bought up because it was the best of them, but the basic model is on the way out. Anyone can start a media aggregation site. Few, needless to say, have the resources or the vision to keep it going.

I don't think too many have cottoned on yet that the game is changing faster than it can be adapted to by conventional media organisations. The rules are that there are no rules. Study the (apparent) strangulation of Wikileaks and see just a few of the new elements in the game.

It's all about POWER! I'm sorry I won't be around to see it. But if you do understand the power relationships and competitive forces, then expect to be a Cassandra, able to foretell the truth but driven insane because no-one will believe you. Orwell was not as far out in his predictions as many think. 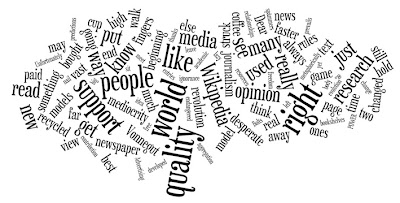