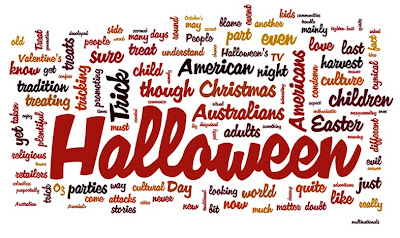 "I miss the days when Halloween was a simple holiday about making ritual sacrifices to evil spirits to ensure a plentiful harvest."

So some witty but cynical American - I'm not sure who - commented in something sent to me yesterday.
Halloween is over, this side of the Pacific at least. It has taken off in Australia, fuelled mainly by the retailers' relentless drive to make a buck out of every annual event, and the Americans' desire to impart their popular culture to the world. So we say. Poor American friends, give up now. You can't win. You're going to get the blame, no matter what.
It was never part of Australian tradition, scorned in many quarters as yet another example of creeping American cultural imperialism, with no purpose other than to induct children into the American way - namely, carrot and stick culture. Trick or treat. What's it to be?
And yet, it has developed a quite strong appeal, no matter how it has been marketed. TV stations, happily promoting the products of their big bucks advertisers, run promo stories faintly disguised as news about Halloween 'events'. Newsmercial. Let's blame the Americans for starting that, too!
Halloween parties abound. It's a great opportunity for some fun and games. Kids, looking for yet another chance to wreck their teeth with sugar and increase their ever-expanding girths, hope for treats. Expect treats, I mean. Why wouldn't they? It's all over TV. October's answer to Easter. Trick or treat. Trick the public, treat the multinationals.
Yet that part of it really hasn't taken off - the Trick or Treat aspect. I haven't ever been in the US at Halloween, so I don't know what it's like there exactly, but I'm fairly sure the tricking or treating is now highly regulated by the parents, knowing a savage and unpleasant side of modern culture is provided with evil opportunities by the event.
It would have been very different in the towns and villages of America a hundred years ago, where communities were tighter-knit and these sorts of nasty things just wouldn't happen. Even in the bigger cities, I'm sure the likelihood of attacks on children, poisoning of treats, even attacks by people masquerading under Halloween costumes on those prepared to open their doors in the spirit of Halloween - they just wouldn't have happened in a simpler world.
It's interesting that no children came round here last night tricking or treating, and let's face it, Armidale is pretty much a village.
I confess I'm pleased about that, and I'm sure most Australians are. Having dressup Halloween parties, both for adults and kids, is fine. People's choice. But that's different.
The fact is, we have no cultural memory of Halloween and its rituals, so if there are to be any, new ones must be created for a new generation. We 'get' Easter and Christmas, even though these purportedly religious festivals have absolutely no religious meaning for most Australians. They are family times, with all that goes with that - Easter eggs, presents, Christmas dinner, party hats, and silly jokes. Tradition.
That's the difference. When an old lady in US suburbia or even in a little city apartment encounters a Halloween tradition, she remembers it from her own childhood and her response is likely to be positive.
People here don't quite know what to do should a child come knocking on their door on Halloween night. Some don't even understand the 'trick' bit at all. Can you respond to the child by tricking them if you aren't treating, or can you expect to have some trick played on you if you don't come up with the goodies?
Don't laugh too hard, Americans - that may stand out like prawns' eyes to you, but without having done it as kids, adults here probably have no idea what to do, any more than if an Indian child asked us heathens to celebrate Diwali, or the Muslim Eid festival. Or the Jewish Hanukkah. Most 'traditional' Australians would have trouble spelling any of those let alone know how to take part, and that's not a scornful comment; it's just a fact.
Anyway, there were lots of Halloween parties for both children and adults last night all round Oz, as commerce gets into stride promoting its money-making potential - a last fling by K-Mart et al before the manna from Heaven of Christmas. The costumiers must love Halloween, so they'll surely be in on it. It's bound to expand.
Many will moan. Christians, or some of them, will condemn the practice as pagan, though Lord knows there's nothing in the world these days quite so dedicated to Mammon as Christmas and Easter.
I neither approve nor condemn Halloween celebration, though I've never been enthusiastic about it, mainly because as a tradition it really is as meaningless here in Australia as Thanksgiving Day or 4th of July. But Halloween's happening, and retailers have it as securely locked into their Events Calendars as Valentine's Day, where we prove how much we love people by the price of the choc and flowers.
People looking for amusement or diversion Down Under enjoy Halloween's novelty, and no doubt it will develop an Oz flavour, if it hasn't already. But they can dispense with the Trick or Treat bit. From what I hear, not many Australians are keen on that, though no doubt Americans used to the long established institution may not understand why.
"A plentiful harvest?" Hang on. Maybe in the southern hemisphere we could combine Halloween with Valentine's Day, when the harvest is actually under way.
Retailers are now stalking me with AK-47s. Religion and love are serious business, and not to be meddled with or poo-pooed by cynical old gits like me.
Posted by Denis Wright at 10:47 AM