home | WHAT'S NEW! | stories from my past
Last Friday evening, on the NSW version of Statewide on ABC TV, there was an interview with Charlie Teo. He's the best known brain surgeon in Australia.
He doesn't mince words, and has theories about brain tumours that some specialists don't like, but he wins my vote every time. He points to the massive increase in brain tumour diagnoses that are happening throughout the world - the western world in particular. In the last five to eight years the rise seems to have been exponential - practically doubling every year - and especially amongst the young.

If that doesn't scare any parent into wanting more research into brain tumours then I can't imagine what will. Yet practically none is being done - not in proportion to the problem anyway. 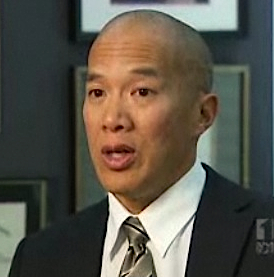 He was talking particularly about Glioblastomas - the form of brain tumour I have. The one thing he says that strikes a chill in the heart of every brain tumour patient is this: 100% death rate. No-one escapes. Life may be extended, but no-one has ever been cured of a GBM.

To recap what I've said before, on average, here's the life expectancy once a GBM is diagnosed at Stage 4.

Life extending treatments: up to and possibly a little beyond 2 years, depending on treatment.

I am just about up to the two-year period. It's been hard work on me, and our family. Very hard work all round.

I think I can do a bit better than two years, but there are no guarantees. The risks posed by the treatment increase daily.

They are not static risks. Blood clots travelling to the brain or heart seem to me to present the deadliest direct risk while the tumour itself is contained.

Organ failure e.g., that of kidney and liver is also a serious consideration. They get put under enormous strain by the medications and my inability to lead as active a life as I'd wish. 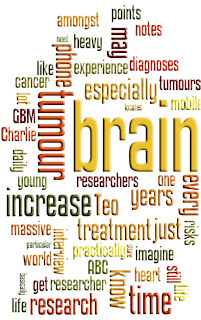 The oncologists and neuro-surgeons working in this area are flat out daily treating patients. The number is endless. I simply can't imagine how they could find time to contribute their knowledge to the research, let alone keep up with it. They must be learning on the job. It's basically trial and error. But their experience is precious.

Charlie Teo says his work is essentially useless without new research. I have a considerable store of data that could be useful for researchers, but a lot of it is in my head, along with Brian, my Unwelcome Stranger. I don't know all the questions to ask of that experience, but a researcher would.

But there are no researchers coming looking. Sure, my oncologist's notes will be valuable, but there's a lot more he doesn't know. I feed him as much as I can to include with his notes, such as this. There may be something amongst these things that helps a researcher - not for me, let me add, but those who are being diagnosed daily and told what their chances are.

There are way too many young people among them; young mothers and fathers and kids.

Charlie Teo was organising a charity walk for money to increase funding for brain cancer research. He shouldn't have to! I'd rather see him in the sun, just having a break for a while. We desperately need him and others in the field to be fit and well for a very long time.

Priorities are all wrong.

Teo still puts up the theory that heavy mobile phone use, especially by young people, may be contributing to the massive increase in brain tumour diagnoses. Some recent studies have cleared mobile phone of any obvious links with brain cancer, but he points to where a great number of tumours are located - close to and just above the ear.

That's where mine is, so I don't know. I have never been a heavy cell phone user. I say the jury is still out, but take no chances.

Added Tuesday, 15 November 2011 The site for donations is


Here's 2 minutes of audio of what Dr Teo said in the 10-minute TV interview. I heavily edited it and I hope he and the ABC don't mind, but it is worth that much of your time.
Upload MP3s using free MP3 hosting from Tindeck.
home | WHAT'S NEW! | stories from my past
Posted by Denis Wright at 12:02 PM