The strange case of an arm and a leg 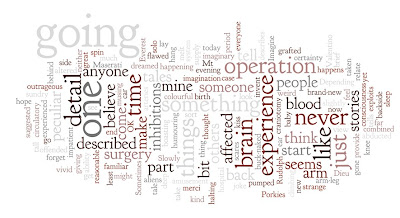 'It was a bit weird,' he said, 'to have my circulatory system altered like that. 'To have blood being pumped in through the arm, down the arteries in my side, and back out through the veins behind the knee. Its own little blood supply.'
'Yes, it does feel peculiar,' I said, slightly impatient to have it described to me in such detail when I was so totally familiar with it, having gone through it myself.
He seemed to melt away from my view, and I lay there, musing on that operation. I was awake. I remembered the details one by one, happening to me just as he described them. But hang on....
The more I thought about it, the more things didn't fit. The only time I had been in hospital was for the craniotomy. I couldn't have had such surgery on my knee or arm. And why would I?
Come to think of it, neither could he, or anyone, as far as I know! They don't do stuff like that.
Slowly it dawned on me. I had dreamed him up at the end of my deep afternoon sleep today. His operation wasn't that important in all this. What jolted me was that I had taken on his strange 'operation' as my own experience. For a brief period, as I had come back to consciousness, I would have been very offended if anyone had suggested I was making up the experience of my arm-leg surgery.
It's a bit of a worry. I can spin a reasonable yarn, it seems. So, if things start going even more peculiar in my brain than they are now, what will I take on or invent as time goes by? If someone has a heart-lung transplant, am I going to tell people in great detail about mine - the one I've never had, and with 99.99999% certainty never will?
If a woman describes giving birth, am I going to relate my own experience at producing a baby?? Or if someone tells me about their brand-new car, will I go around boasting to all and sundry about my new Porsche? (It's a Maserati, actually.)
It's kind of a joke, and yet it's not. Depending on which part of my brain might be affected as things develop, I could start telling tall tales. Deranged porkies that provide much amusement (in a way) to others.
And what if something that seems to others to be a tale of vivid but seriously flawed imagination comes out, and it really had been something I'd experienced, who's going to believe me? If I can see that people are just humouring me, I'm going to get quite cranky, I am sure of that.
No, I was never abducted by aliens. At least, I don't think so....
There's more. Sometimes a lobe of the brain that's affected is the part where you lose all inhibitions. That one scares me. Imagine if no inhibitions were combined with an ability to make up engaging stories. What if I come out buck-naked one evening with outrageous tales in minute detail of an imaginary but colourful past that would make the exploits of Casanova or Rudolph Valentino look like that first halting kiss of mine at the age of 14?
If the gap between reality and imagination closes for me, I just hope I can nurture my inhibitions and stick to stories of how they grafted an ear on to my backside or something - without the desire to show everyone where it's growing.
Did I ever tell you about the time when I was climbing Mt Everest solo, that I ....? Oh, OK, forget it. You're not going to believe me anyway. Dieu merci.
home | WHAT'S NEW! | stories from my past
Posted by Denis Wright at 8:50 PM