The Melbourne Cup and Mr Gudekunst 1 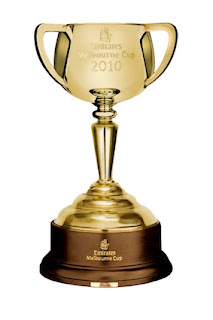 I intended to write this little episode on Melbourne Cup Day, but fell asleep too many times to do it.

I was talking about Halloween the other day and how it will develop a tradition outside America that drives it. As kids, we in Australia had that sort of tradition for the Melbourne Cup.

As there was no TV, we heard it on the radio live whenever we could, but because it was in school time, that was rare, especially in the days when Old Jim was Headmaster. His Methodism forbade it, or so it seemed.

In 1959, my Grade 8 year, things changed. The new headmaster was Mr Reddy. He was Catholic, and you know how they always loved a flutter on the ponies, even the priests and the nuns, apparently. Maybe especially the religeuse.  For Protestants like us, the idea of sinfulness about betting still hung around its edges, though it didn't stop most people if they got the chance. Anyway, Melbourne Cup was different. All bets were on!

Usually on a Tuesday afternoon, the whole school would gather in the Big Room, and everyone would get out their ABC Radio for Schools songbook, and we would learn a new song. The idea was brilliant. The radio would be turned on, tuned to the ABC Schools Broadcasts, and real music teachers would teach us these new songs accompanied by real pianos and singers who could reliably hold a note.

This was an enjoyable diversion for the kids, and via this medium we learned songs we'd never have had the chance to otherwise, like 'Reedy River', and 'Shenandoah', and 'Campdown Races'. Not exactly highbrow, but we loved them.

'Please, Sir, can we listen to the Melbourne Cup?' we asked Mr Reddy. He'd talked about it earlier under the guise of Social Studies, so we knew we were in with a chance.

He had a bet on Macdougal, so was tempted. Some other kids like Bimbo Brown skited about how their parents put a few bob on their pick with a Gladstone bookmaker. At that time the TAB didn't exist, by the way, and all betting was with bookies, often unregistered ones. There's a slang term for them I can't think of, just like everything else, and Google's no help.

Mr Reddy yielded to the temptation, spurred on by our request and his ten bob on Macdougal, even though the Melbourne Cup was scheduled to start right at the same time as our music broadcast.

'Let's see how well you do with your copybooks first.' He wasn't above a little educational blackmail while he had us nosing around the bait.

Never had we written so beautifully in our copybooks.  Even 'Spider' Koplick had produced what was for him his chef d'oeuvre of calligraphy, which meant that he hadn't got more than five blots on the page.

The other teacher of our two-teacher school was Mrs Dart. She taught Grades 1, 2 and 3. She had them lined up to come into our Big Room for singing, and opened the glass-panelled door between the rooms.

'Ummm....' said Mr Reddy, 'this afternoon we're going to listen to the Melbourne Cup instead of singing.' He looked a bit sheepish.

Mrs Dart was, by great coincidence, married to George Dart. Well, I don't mean that was an accident, as I'm sure it wasn't - it's just that George Dart was the very man who had, years before, solved the mystery of the frog jumping out of the circle, and if you haven't read about that, then take a minute to do so, because it's a good and true tale of our youth.

Mrs Dart was a good deal younger than Mr Reddy, though I'm sure he was no more than about 40 at the time, maybe younger. When you're 12, anyone past their teens is getting on, especially your parents.

And why am I telling you this? Because Mrs Dart's maiden name was Gudekunst.

Oh, of course - what you probably don't know, except if you're my sister, is that Mrs Dart's father was Mr Gudekunst.

OK, maybe you worked that out. It's not something that would baffle Stephen Hawking. What I meant was, he wasn't just Mr Gudekunst. He was the Mr Gudekunst. The Regional Director of Education, Central Queensland, Australia.
(continued - final part!)