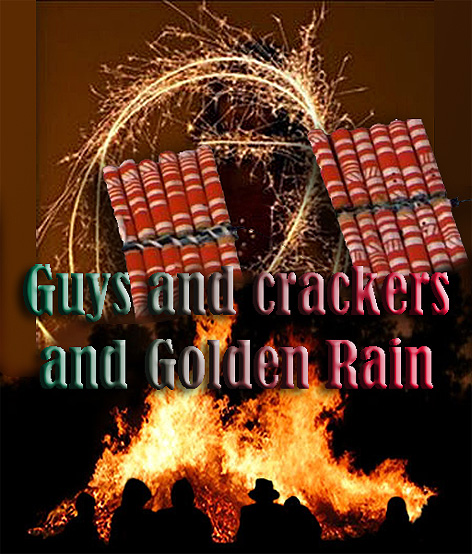 In our fair township of Calliope round 1960, one of the highlights of the year was undoubtedly Guy Fawkes Night, also referred to more popularly as 'Cracker Night'. Cracker Night was celebrated at different times in different states of Australia, but for us it was 5 November each year, which coincided with Uncle Frank Ford's birthday.

On or about that day in 1605, poor old Guy Fawkes was caught and came to a nasty end for trying to clear England of politicians, using lots of gunpowder under the House of Lords. Something like that anyway. He should have got a medal really; maybe he would have, except he failed, and ended up with a rope around his neck instead. The whole horrible drawing and quartering as well, I have to add.


WARNING - part of that story is historically inaccurate; as an historian I have to admit that, but - think dramatic license.
A couple of Wrights from the Catholic side of the family were involved in that right royal plot, it seems. That'd be right - anything with explosives, they'd be in it. It seems we Wrights inherited the love-of-bangs gene.
I could have put that better, I suspect. Then again, p'raps not.
The Gunpowder Plot was an extraordinary event for all sorts of reasons, but I have to stick with our end of it, here in Australia, on warm summery nights amongst the mozzies.
Guy Fawkes Night was the third ranking of our annual celebratory events, those above it being Christmas and Easter, and below, but only slightly, were School Breaking Up picnic day and School Sports Carnival day. Birthdays, of course, were right up there, but they were different.

My sisters may dispute this order or add others, but then they're not looking over my shoulder, so that's how it goes down on the blog.

The fireworks all came from China, beautifully hand-made by sweated labour no doubt, and were of two main types. There were the ones that went bang and the ones that were pretty.

Of the ones that went bang, size did indeed matter. Tom Thumbs were the smallest, with an explosive crack about that of a cap gun, or a really good clap. They came in neat parcels of a violent pinky-red and bluey-green colour, though we wouldn't have spent that much money on Tom Thumbs to buy full packets containing thousands; we just bought several strings of them.

These strings had a fuse strung right through them, and in China were often set off as a cluster, making a sound of rapid rifle fire (a pea-rifle, that is!)

We thought it a terrible waste to do this, as the fun for us was to set them off individually. One of the enjoyable tasks the night before was to unstring them and put them into the box as single crackers.

Unstringing them was a fairly delicate operation and you had to be gentle doing it so as not to pull the wick clear out of the cracker. (If that happened, we saved the defused cracker, but I'll mention later what we did with them.)

Everyone on Cracker Night had a go with Tom Thumbs, even the littlest of kids except for real scaredy-cats, and there weren't many of them. Usually the adults would draw out a few burning sticks from the bonfire so everyone with cracker in hand could set the wick on fire from one of those. I can't imagine how many boxes of Redheads matches would have been used otherwise and in any case, lighting them from a match was more dangerous and inefficient. A burning ember was the safest and most economical way.

The adults would watch the little ones light a Tom Thumb with great amusement. The wick wasn't all that long and once you saw that bright but tiny flare of the fuse, you didn't have long to throw it. You didn't want it still in your hand when it went off, as there was a small risk of a minor burn or at least an unpleasant sensation of tingling in the fingers if you failed to launch the cracker at the right time.

All of us knew exactly what that felt like with a Tom Thumb, but you wouldn't have wanted to do it with a penny bunger.

That was part of the fun, of course. The element of danger. The reason why we do all sorts of things....

Little kids would put the wick against the ember, and it might kick off straight away, or maybe take a second or two. 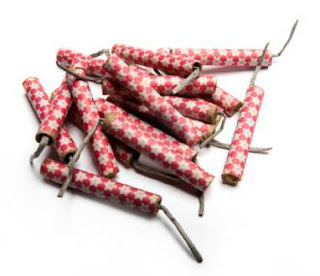 Once the wick started fizzing, it was essential for the kid to stand up to throw it any distance, which for most was as far away from themselves as possible. But anxiety to do this could produce some unexpected results. A false alarm that the wick was lit would see the little one suddenly jump up from a squatting position and then realise it wasn't lit at all; so they would have to squat down and start again. But the second time, the wick might light immediately, catching the kid off-guard, so they'd have to jump up if they had time and throw, before the little cracker exploded in their fingers. So you'd see littlies bobbing up and down with their Tom Thumbs, lit and unlit, in delight and fear.

This had some unpredictable results. The rush of blood as the wick was fizzing down meant that they didn't always calculate where they were throwing the cracker. Anywhere - as long as it was away!

Lyn was notorious as the guilty party here. She often had one lit but she feared the fuse was burning down so fast she sometimes wouldn't even jump up, but tended to despatch it in any direction. Worse still, she occasionally failed to calculate the point at which she should release it and held on too long, and her underarm throw became a challenge to anyone behind her - usually our mother - because that's where the cracker would go - over Lyn's head. Mum would find herself with an exploding Tom Thumb in her slipper.

That was highly amusing for everyone except perhaps for Mum, but she took it in good spirits and increased her vigilance when Lyn was about to engage with a cracker of any sort, especially a Double Happy.

The Chinese invented wonderful names for their fireworks. Double Happy, I suspect, would have been much better suited to a condom. Yet I must say, the Double Happy was an excellent cracker, as you'll see.

And so to other fireworks we would have in the box, but I promise not to go into such detail with them.