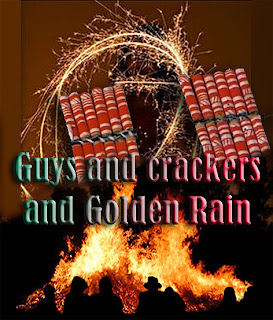 'Let's make a vegetable patch in the garden,' some bright spark said at school one day when I must have been about nine.

But we had no gardening tools. Someone bravely went up to see Old Jim, who hadn't yet gone over to the school house for his lunch.

Old Jim, as I've said, was both fierce but respected. He also had one characteristic that we kids were aware of. If we wanted to do something worthy without having been prompted, he was fully supportive. So before he had his lunch, he loaned us his own garden tools for the project.

The 'garden' was a fenced off area between the school and the road and was at the time overgrown with weeds, and a bit unsightly. It's not surprising that Old Jim gave his blessing to our sudden burst of enthusiasm.

We dug up a good patch of ground. I had a mattock and was breaking up the topsoil with surprising enthusiasm, when the mattock made a slight chinking sound. Something shiny had emerged from the clump of clayey soil.

I picked it up quickly, rubbed most of the dirt off it, and was delighted to find it was a two-shilling piece. 1946 was the date on it; the year before I was born, with the familiar Australian crest on the back and King George VI's head on the front. He was the present Queen's father.

I gleefully took the coin to the school tank and washed it off under the tap. Having been in the ground that long, it was a bit yellowish in colour in spite of having a high silver content. The florin, as it was sometimes called, was replaced by the 20 cent coin when our currency was decimalised in 1966.

That probably seems like a trifle these days, but then... what couldn't you do with two bob? It was a fortune. You could buy a whole MacRobertson Snack Block of chocolate with that. It was like a twenty-dollar note would be these days.

Would I do that? Buy a Snack Block and have the unimaginable pleasure of scoffing it all myself? It was tempting, but no. Would I take it home, polish it and put it in my Commonwealth Bank money-box?

No. Don't be silly now. With Guy Fawkes Night coming up in two days, I would do neither of those. I would do what any sensible nine-year old boy would do.

After school, I'd go to Mylne's Store and I would buy fireworks. And if I got Rocket Armour to serve me, I'd get amazing value out of my two-shilling piece. Which I did:

2 strings of Double Happys
2 Penny Bungers
1 Double Bunger
1 Jumping Jack
1 Flower Pot (to please my sisters, but also because of the very satisfactory rat-tat-tat explosions at the end.)
1 LARGE bunger - the humungus sort I coveted and, thrown into the brown paper bag with a wink by Rocket Armour, living up to his name as well as his reputation, a new model of mini sky rocket I had never seen before.

It was most satisfactory. Mum might have thought there were better things to do with a whole two-bob bit, but Dad was secretly pleased.

I could tell.
home | WHAT'S NEW! | stories from my past