Living Simply by the Tao 5

home | WHAT'S NEW! | stories from my past
pt 1 | pt 2 | pt 3 | pt 4 | pt 5 | <<you are here | pt 6 | pt 7
(This will make more sense if you read earlier parts first - see above!)
The world then is a place of relativity, where things are hot only because we compare them with something cold, or large because other things are considered small. Reality lies beyond this world of transience and relativity, and can be grasped when we understand that this is the nature of this ever changing world.
To the Taoist, a better way to look at this universe is as a balance or harmony of opposites, with the opposites intrinsically related to create a unity. The opposites are known as yin and yang, and for everything there is yin and yang. The self is at peace when there is an equality of yin and yang, just as a forest is in balance when it is not interfered with unnaturally.
Therefore having and not having arise together.
Difficult and easy complement each other;
Long and short contrast each other;
High and low rest on each other.
Without yin and yang, the universe would have no motion. Taking it to a lesser extreme, if one could imagine an existence devoid of yin and yang, existence would be the colour of beige, there would be no male and female. There would be no existence. This seems so obvious, yet important qualities of yin and yang fail to resonate with humanity, and they are allowed to get out of balance. 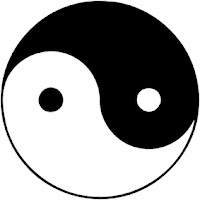 Note the famous yin-yang symbol. Why is it like this? Firstly, it is a unity. All is enclosed within the circle. It is not two hemispheres divided by an equator; greater becomes smaller and enters its opposite. Within the 'head' of one opposite is the 'eye' of its opposite. Even at the very centre of yang there is yin, and vice versa.
Life is the art of keeping these balanced. The greater the understanding of ourselves and our world, the more this balance is retained. Yet to say this is all within human capability is expecting too much; it is something to be aimed at, and at some time will be lost.
There is always a time when the top stops spinning, and falls over. That we must expect as well. Until then, harmony and balance are the keys.
The most striking example of the unity of opposites in the entire Tao te Ching reminds us that space is the opposite of form, and that like all opposites, they complement each other and are inseparable.
Thirty spokes share the wheel's hub;
It is the centre hole that makes it useful.
Shape clay into a vessel;
It is the space within that makes it useful.
Cut doors and windows for a room;
It is the holes which make it useful.
Therefore profit comes from what is there;
Usefulness from what is not there.
Who says that space is useless?
Linked with the unity of opposites are two symbols which recur constantly throughout the Tao te Ching; the image of water as an indication of the way the Tao works, and the rather perplexing image of the Uncarved Block.
home | WHAT'S NEW! | stories from my past
pt 1 | pt 2 | pt 3 | pt 4 | pt 5 <<you are here | pt 6 | pt 7
(This will make more sense if you read earlier parts first - see above!)
Posted by Denis Wright at 7:37 AM