home | WHAT'S NEW! | stories from my past
four bob (1) | four bob (2) | four bob (3) | four bob (4) | gutenblog
The story so far: I bought a plastic bow and arrows with the four shillings that Cam Lowes gave me, supplemented by eleven pence from Mum. Did I really need three episodes to get to this point?
The train seemed to take ages to get home that day. We had to wait at the junction for some goods train to pass through, and by the time we walked home from the station it was dusk.
I had adhered to my promise not to open the cellophane wrapping, but my fingers were burning all the way home. At last the time came.
The bow turned out to be everything I could have desired. The plastic was incredibly sturdy and even though I was no weakling, I couldn't draw it back quite to its fullest extent, thus allaying Mum's fears that I'd snap the bow in two in the first minute I tried it.
I don't know what the formula for that plastic could have been, but it was amazing. Maybe it was the red colouring. Whatever. Even the poncy rubber stickered arrows went like a bullet in the girls' bedroom, though I was banned from putting spit on the rubber sucker to help it stick to the unpainted wall.
I had to wait till morning to do some proper military testing on the new device, but having it by my bed on the verandah that night was a great comfort to me. Should the half-man-half-apes have attacked me that night instead of nearly doing so on that other occasion, I would have been fully armed and pretty damn dangerous.

The bow, as I said, was perfect. The arrows left much to be desired, though the rain gauge on the post was, admittedly, more in fear of its life than ever before. For some reason I was also banned from including it as a target in my series of military tests. Obviously Mum decided, when she saw me on the missile range, that the rain gauge's original function, namely, to measure precipitation, was in need of protection.
The arrows were not aerodynamic, that much was certain. Over five metres it wasn't a serious problem, but a new warhead had to be developed. Or to be more precise, a new delivery system.
Then I had a cunning plan. And this wasn't a Baldrick cunning plan. It was genuinely good one.
In one part of the creek were bulrushes. These plants are reputed to be bad for the ecology of water systems, but I had plans to help solve that and build an arsenal at the same time.
Actually, I wasn't that concerned about ecology. Besides, if this worked, I would need lots of bulrushes, so extermination was not on the agenda. It would become resource management.
By cutting a maximum sized bulrush spear, and slicing off the bit where its seed head was, I had the makings of the perfect arrow. I mean, excellence with a capital YES.
I had no trouble wading into the bulrush pool. In the tropics where we lived, mud squishing between your toes was a good feeling. What I really needed was a good cutting instrument. Even the Sharp Knife in the right-side kitchen drawer – the one with the black handle and one rivet missing – wouldn't ... well... cut it. Nor the tinsnips. I needed something to cut the end with absolute precision, at 90° to the perpendicular, i.e., perfectly square.
The solution was obvious, and that was Mum's silver dress-making scissors – the ones we kids, especially one kid in particular, were barred access to on the grounds that we would do things to blunt them.
This of course was no barrier to me. It was just a matter of sneaking them out of the sewing machine drawer when she wasn't looking, which I was able to do because I was very good at doing stuff when she wasn't looking. I'd had experience.
Silver scissors in hand, I waded in knee-deep and found that I had struck arrow gold. Some of the stems with that brown fluffy bit at the top were quite dry from age, and the spores or seeds were already being carried off by the wind. I snipped off the base of the stem, as well as the top bit, and I had in my hand the lightest, straightest arrows ever devised by nature.
It was no use going to the tedious task of fletching the arrow before preliminary testing, so I fitted one of these prototypes to my new bow, unfletched. I aimed straight up in the air, and fired.
The result was pure, unmitigated ecstasy. I mean this when I say that it shot so high and so fast that I lost sight of it in the woolly cloud above. I don't mean that it went into the cloud (though I don't dispute the possibility); it just disappeared from view as it went slightly off course at its apogee as the result of its lack of a tail-feather. It floated down quite a few seconds later. No, I don't know quite how many, as I didn't have a stopwatch on it. I didn't have a stopwatch. I had no timepiece at all.
This was just before the Russians put sputnik into space. I almost beat them to it with my bulrush arrow, though I admit tracking it might have been a problem, as it was an under-the-radar device.
With proper fletching, the bulrush arrows were deadly accurate over twenty to thirty metres, once I'd had a bit of practice and adjusted angles from those of the unsatisfactory mulberry wood bows I had made.
I should add that I wasn't interested in shooting birds or anything live; an inanimate target was fine by me, barring the rain gauge as I said. I didn't want my weapon to carry a warhead of any description. I was happy to put an old towel on the clothesline with a hand-drawn target on a sheet of paper sticky-taped to its middle. It caused less damage to the arrow tip, reinforced only by a thin wrapping of tape, than hitting a tree.

The towel came off worse than my arrows and I was banned from using good ones, especially Mum's.
Science suffers terribly from restrictions, and when I was seven I got banned from experimental activity more than most scientists, it seems.
But I'll bet William Tell would have been using me as Phone-a-Friend when the dictator Gessler made him shoot that arrow at the apple on top of his son's head. I'd have hit the apple dead-centre while Mr Tell "shot the wicked tyrant through the heart" as our Grade Four Reader said when telling the story.
You question the veracity of the William Tell story? Well don't. If it's in the Grade Four Reader then it's gospel, like anything in the Courier Mail.
On several later forays to the bulrushes, I had to be extra careful commandeering the good scissors. Luckily, because mothers don't understand the physics of bulrush arrow technology, I got away with it, though on one occasion after I re-stocked the quiver there were some suspicious looks in my direction, when she needed to cut out a dress for one of the girls from a new McCall's Pattern.
I thought that accusatory stare was pretty unfair, because nothing could be proven. There was not the slightest trace of mud on the silver shears. I hoped. 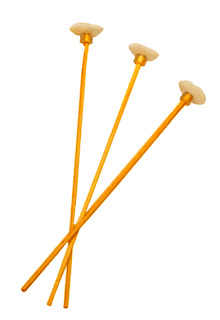 I found an excellent use for the bought arrows with the rubber suction caps on the end. At the height of summer, a lot of flies would hang around the milking shed. There was a particular wooden post on which they'd snooze in the middle of the day.
These flies were a constant source of irritation, as we didn't want to use any more pesticides (mainly DDT in pump sprays) than we needed to, but it also wouldn't look good if the Health Inspector came along and thought that there was (or were) an excess of them flying about, or sitting on that post.
So, you can see where this is going, right? From two metres away, with the suction-cupped arrows, I would target an unsuspecting Cyclorrhapha musca domestica on that post and with unfailing accuracy, would send the fly to meet its Maker in a zillionth of a second.
It was a merciful killing, DDT being a painful way to die I'm sure, legs kicking in the air and that death-rattle buzzing. With my method, they wouldn't have known a thing about it. By the time they thought "Wha..." they were mashed to the post as if they'd been through a blender.
My accuracy over two metres was excellent. I say that with pride and not a trace of conceit. Well, maybe a little. My hands never touched the mortal remains of a despatched musca, nor did I touch the suction tip, which I washed thoroughly after the killing spree.
I was a perfect killing machine with the scent of blood in my nostrils and I had no pity. I was the Fly Hunter. Tarzan may have reigned supreme in the Darkest African jungle; I, in the milking shed, Lord of the Flies.
I couldn't wait to show Dad the results of my skill and ingenuity. Strangely, he was not happy. The thought that the Health Inspector might come along unannounced right then and survey the mortal remains of two or three score barely-recognisable flies on the pole between two bails where cows were milked sorely displeased him. He handed me an ancient nail brush and a prune-tin on its last legs full of hot water and milky-white Dettol, and I was ordered to scrub the post clean-as-a-whistle before leaving the establishment.
That's gratitude for you.
I promised utterly faithfully to end this story with this posting, and I have. There were Appendices to this that I decided to leave out. Maybe, in some other format, I'll return to them. It is done, it is done.
home | WHAT'S NEW! | stories from my past
four bob (1) | four bob (2) | four bob (3) | four bob (4) | gutenblog
Posted by Denis Wright at 10:18 PM