The old 'bananas and monkeys' story 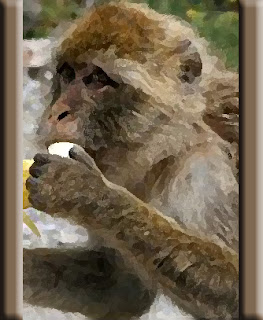 I'm pretty sure you've run across this story scores of times, because I have. There's a dozen versions on the web, many unmercifully plagiarised from each other.
Just in case you somehow missed it, I'll reproduce here what I think is the best version of it, though for all I know it could have been derived from one of the ones I've discarded.
I have a reason for mentioning it because it's important to a coming serious discussion that I have in mind about our experiences with brain cancer therapies, and I don't want to have to explain this yarn there.
I'm not the first to ask whether this story has any basis in fact. It smells mightily of urban legend. The great website for sniffing out all sorts of urban myths, snopes.com, is surprisingly vague about it. I thought they'd be sure to dismiss it summarily as apocryphal, but they didn't.
I did get interested in whether or not this experiment was ever carried out, in any variant form, and there's some basis in fact for it, as you can see at the end if you want to check it out.

(I've excluded the introductory moral of the story bit as it diverts from my intent, but it's there in full on the website.)

That’s The Way It’s Always Been
Post written by Zen Family Habits contributor Corey Allan.
....
Start with a cage containing five monkeys … Inside the cage, hang a banana on a string and place a set of stairs under it. Before long, a monkey will go to the stairs and start to climb towards the banana.
As soon as he touches the stairs, spray all of the other monkeys with cold water. After a while, another monkey makes an attempt with the same result – all the other monkeys are sprayed with cold water. Pretty soon, when another monkey tries to climb the stairs, the other monkeys will try to prevent it.
Now, put away the cold water. Remove one monkey from the cage and replace it with a new one. The new monkey sees the banana and wants to climb the stairs. To his surprise and horror, all of the other monkeys attack him. After another attempt and attack, he knows that if he tries to climb the stairs, he will be assaulted.
Next, remove another of the original five monkeys and replace it with a new one. The newcomer goes to the stairs and is attacked. The previous newcomer takes part in the punishment with enthusiasm! Likewise, replace a third original monkey with a new one, then a fourth, then the fifth.
Every time the newest monkey takes to the stairs, he is attacked. Most of the monkeys that are beating him have no idea why they were not permitted to climb the stairs or why they are participating in the beating of the newest monkey.
After replacing all the original monkeys, none of the remaining monkeys have ever been sprayed with cold water.

Nevertheless, no monkey ever again approaches the stairs to try for the banana.
Why not?
Because as far as they know that’s the way it’s always been done around here.

(Closing moral excluded, but you can guess it. This tale has been adapted to suit business management as well as family relationships. As you'll see, I have my own purpose, which will be revealed in the fullness of time.)
The footnote:

"Stephenson (1967) trained adult male and female rhesus monkeys to avoid manipulating an object and then placed individual naïve animals in a cage with a trained individual of the same age and sex and the object in question. In one case, a trained male actually pulled his naïve partner away from the previously punished manipulandum during their period of interaction, whereas the other two trained males exhibited what were described as "threat facial expressions while in a fear posture" when a naïve animal approached the manipulandum. When placed alone in the cage with the novel object, naïve males that had been paired with trained males showed greatly reduced manipulation of the training object in comparison with controls. Unfortunately, training and testing were not carried out using a discrimination procedure so the nature of the transmitted information cannot be determined, but the data are of considerable interest."
Sources:

I was a bit amused at the intensity of the discussion around this tale, ranging from observations about the effect of the behaviour of the Alpha male of the group on attempts by others to reach the banana, to outrage at the cruelty of spraying water on the monkeys participating in the experiment. Not amusing was the thought that this was a mild experiment compared with some experiments our little monkey brothers and sisters are put through, but let that pass.
In the end, its veracity in simian behavioural studies has little to do with my story. The general point will.
home | WHAT'S NEW! | stories from my past
Posted by Denis Wright at 10:32 PM