home | WHAT'S NEW! | stories from my past
Last Friday, a wondrous thing happened.

Well, it was wonderful to me, though may seem not so significant except for the others involved, who understood why it meant so much to me and made it happen.

I've mentioned many times the story of how we discovered I had a brain tumour. The important thing to today's story was that I had only barely started to cut down the runaway portion of the hedge at the side of the house when the events occurred leading up to finding myself in an ambulance on the way to hospital for emergency treatment.

So the small group of large stems a metre above the remainder of the hedge remained uncut as we dealt with a much bigger pruning problem in my brain.

In the months of treatment in Melbourne, friends from the ADMS* and elsewhere got in and had working bees on our garden to keep it in order. It's a middle-aged kind of garden, if you understand the analogy, and with a good growing season and no maintenance, can quickly get out of control. We were terribly grateful for this and the garden always looked neat and tidy even though we were away for those months.

Only one section of the hedge remained in the too-hard basket: the part where I had begun the earnest task of solving it on 3 December 2009 and ended up in hospital.

Tracey and Christian worked on the garden in the months that followed; months that stretched to years. We have had extraordinary succession of growing seasons; mild, wet seasons all round, and it was difficult to maintain the garden. But it got done, made easier at times by the intervention of friends.

I am usually up first in the mornings. Each day I pull up the blind in the kitchen to let in the light. Most days have been quite grey, but there was always one constant in my view.

That was that growing, expanding privet, gone now from bush to vigorous tree. Trees. And in that one spot before my eyes, expanding daily, like a cancer. Every morning it seemed, it had grown visibly larger.

Ironically, privet is a Declared Noxious Weed in these here parts, which means if it is not controlled by the owner, the local council can take action and destroy it; for a considerable sum, no doubt. When it's in flower, it can be deadly for asthma sufferers and a constant source of irritation to those with allergies.

Friends had gladly offered to remove it, but every time a privet removal party was arranged, it rained, or the arrangement broke down because life intervened, as it does.

And so, to cut a privet-like story short, I was reminded daily of unpleasant events going on in my brain by the cancerous growth outside the window; my first view of the day, each and every day. For the most part, I kept these thoughts to myself. Knowing how I felt about it, Tracey had done everything she could to have the four metres of out of control hedge removed, but it just seemed doomed to failure.

This became an obsession with me. I could do nothing about it myself. I had even tried, early on, but it ended inevitably in a seizure, and I was banned from any further attempts.
Each day looking out that window, I wanted it gone. Each day, it grew bigger.

Finally, early last week, when our dear friend Julie was here on one of her all-too-rare visits - rare only because she fears too much that she might intrude - I (or was it Tracey?) blurted out to her my daily reaction to the privet bushes (trees) in total view out the kitchen window, and their effect on me.

Julie went away. Shortly after, we got an email. She and Michael and our other good friends Joan and Carl would come on Friday, and deal with the monster. Michael, armed with chainsaw, and Carl, with trailer, Christian, who had put off a long-awaited camping trip due to begin on that day in order to take part, Julie, Joan and Tracey would make it disappear. It would only take an hour, said Julie. Ho ho, I thought.

It was sunny and warm on the day, and the working bee arrived, fully armed and ready for action. There were a few things about those four metres of hedge that they didn't know, but were about to find out.

For one thing, the privet was full of thorny climbing rose and other tough-stemmed vines, and there was also a wire trellis hidden from view deep within; not something to discuss with a chainsaw, for in spite of all those great chainsaw massacre movies you might have seen, all sixty teeth on a chain can be blunted or wrecked in less than a second by wire in a hedge.

And that wasn't all. There was a fence to fix afterwards. Not one, but three trips to the recycling depot. 15 minutes there, 15 back, and 15 to unload, times three.  Not quite the one hour, Julie. I knew that was a bit optimistic! It would take an entire morning, with six people hard at work on an unusually hot day for Armidale.

But, my friends and rellies, it's gloriously gone. I look out the window this morning in the sunshine, and ... well, to be truthful, the neighbour's garage, not in great repair, and the side wall of their house are in some ways less attractive to look at than a large green tree, with the last of its illegal privet blossoms. But there's far more light streaming in.

And it's gone! That burgeoning cancerous mass of luxuriant growth has been erased from the order of the rest of the hedge.

Now, thanks to the Friday Working Beavers, I feel I can focus on that other one for the first time.

I can't thank you enough, dear folks. One blight has been removed from our lives. 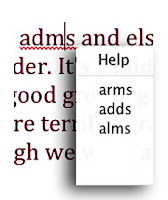 *ADMS stands for the Armidale Drama and Musical Society, of which I am a Life Member. Various members and other friends and relatives helped us hugely when it came to such things, as well as raising the money to pay for Avastin which has helped so much to keep me alive so far.
I wrote 'ADMS' in lower case when drafting this posting. Curious, I wondered what the spelling-checker would make of the 'word' and what it might suggest. This was the result!
home | WHAT'S NEW! | stories from my past
Posted by Denis Wright at 10:16 AM