Show & Tell.3: The Toast in the Machine 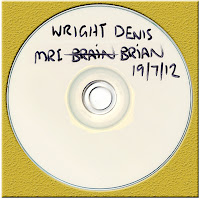 .They're running a fraction early too, and before long I'm called in.

I sigh. Do we have to go through this charade again? It happens every time. 'I don't need a gown. It's a cranial scan, not my body.'

Getting in and out of clothes with my uncooperative right arm and leg is something I don't want or need to do for this, particularly in a booth the size of a dunny. He looks at my old sweater and daks. I've chosen them deliberately for this purpose.

'No metal clips? Nothing in the pockets? Anything?'

Full Metal Jacket, I want to quip, but there are times for such frivolity and this isn't one of them.

'No. No eye operations, screws in my skull. Or bolts in my neck...' He grins a bit painfully at the Herman Munster gag. 'Nothing's changed since last time.'

'OK,' he agrees readily with my sartorial choice.

I can manage untying the laces and removing the shoes. I walk clumsily into the room containing the MRI chamber and lie on the table, after a struggle to get on it. It makes me all too aware of the mobility I've lost since last time, when I wouldn't have thought twice about it.

I've misjudged and I'm too far up. The head cradle is closer to my scapulae than my neck. Try as I might, I can't move down enough. He has to get an assistant to lift me into position.

These are the times when you realise how useless you've become. It's always a shock because you never quite expect it.

They surround my head with packing to minimise movement. He explains the procedure. It's very familiar to me but it's his job to do so again. I get him to stick the right earplug in for me.

That's another thing you'd do for yourself without thinking about it, but I'd have trouble lying there poking it into the right ear. He gives me a device to hold in my good hand. Press it for emergencies. It's something I've never had to do. I cross my arms in a kind of Egyptian mummy position. They put a light blanket over my body, which is just as well, because it's cold. 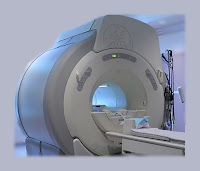 As the table's motor trundles me into the chamber, the wisdom of crossing my arms is evident, as there's not much room in there. This must be the time when those who have a tendency to claustrophobia have their pulses racing; but really, it's not that bad. There's a fan blowing a gentle breeze across your face. You really need that. It's comforting. There is some space above your head.

But you do feel very alone.

'Are you all right there? Comfortable?'

I realise that he's talking to me, but I have the earplugs in and his voice sounds like it's coming from a million miles away, talking to someone else.

'Don't hesitate to press that buzzer in your hand if you need to.'

Oh, I won't – but it would have to be pretty bad, because once we've started I don't want to have to repeat any of it. The only thing that raised my stress levels the first couple of MRIs was the fear of having a seizure in there, and consequently having to do it all again, with the added stress of knowing it had happened once already. But it never has and now it doesn't bother me.

The clanking and beeping and shuddering of the machine begins, as it calibrates and does things I'm not sure of. I'd like to understand, but it's not something you get around to talking about. It seems very loud this time compared with those of the past.

Sometimes I've been so comfortable in there that I feared I might start drifting off to sleep, but I really wouldn't want to do that. With all that clanking and beeping it's hardly likely.

This time, it seems I've made a miscalculation based on faulty memory about the MRIs from the past.

My recollection was that the first session in the machine was only about fifteen minutes, and then a long one of about thirty at least. But apparently that was wrong. It's the other way round. So I'd reckoned on coming out again fairly quickly on the first run, but it seemed to go on and on; all the longer because I was expecting it to be short. Even fifteen minutes in that machine with nothing more than your thoughts to accompany you is not a short time. Thirty-five is forever.

Worse still, I developed a strong urge to clear my throat or to cough. You know what it's like when that happens. It becomes nearly irresistible. But, not knowing when or if there was a wrong time to do that for the sake of the imaging, I resist it fiercely. Not a muscle do I move.

Finally, after what seems like an hour, I'm ejected from the chamber, not quite like a recalcitrant MP at Question Time in Parliament. I come out feet first. Occasionally I think some of them should. Meeoww.

'Well done. You were very still." He probably says that to everyone, but it makes me feel like I was a good boy having resisted the urge to cough or swallow.

'This doesn't feel quite like the same machine as last time. It seems ... louder.'

'It is the same one,' he says. 'Oh wait – eighteen months did you say?' He thinks about it for a moment. ' You're right. It was replaced a year ago. This is a better one. Well, we get better images. Maybe the earplugs are different.'

'Now, we find a vein and inject the dye, and send you in again, only this time it will be much shorter – about ten, maybe fifteen minutes at most. Which arm?'