.
Tracey orders the meal, while I find a place that I divine through long Taoist practice is optimal for us – where the qi is as good as it gets, you understand, which is no mean feat in here. My Geiger-counter qi meter says go to the end of the extension room facing east, closest to a door that no-one goes through.

Sitting there, I am reminded briefly of a hotel in China somewhere up the Old Silk Route when I led a group of thirty-four intrepid Australians on a Journey to the West odyssey to rival that of Monkey and his companions. On the second floor of this hotel was a sign: USUAL DOOR. Down the end of the passageway leading to the fire stairs was another sign: UNUSUAL DOOR.

A child with facial features tending towards the primitive runs past me like a howler monkey and pushes the door with commendable gusto, ignoring a much more sensible entrance to the kids' play area he should have used in the first place.

Congratulations, kid. You found the Unusual Door and stuffed up my qi. Bravo. Go to the head of the class next to the boy picking his nose.

A pretty little girl dances in through the Usual Door to the play area. She kicks off one shoe and hurls it south, the other as far north as she can. Then she drags one sock off and hurls it west; the other easterly, and skips off to enter the large red tunnel. The dumb-looking kid lives up to my expectations by trying to enter the blue tunnel blocked by a partition of clear Perspex, and is mystified at his failure.

Back in the dining area, a man in a powered wheelchair bulldozes the static chairs aside and parks at his chosen table. I like that.

Eventually the girl's mother enters the playroom by the Usual Door, goes to the four corners of playworld and retrieves the shoes and socks. The girl plays on. The boy is still having problems working out how to get into the blue tunnel, mesmerised by the one entrance to which he has no access. My suspicions that he's not very bright seem confirmed.

Against expectations, the coffee and meal take a long time coming. We eat and drink with less enthusiasm than I anticipated. We leave our dining establishment feeling the way we mostly do as the Golden Arches recede and vanish – downlifted.

I think it's the effect of the children playing in the Macca tunnels that accounts for what happens next as we drive out of town. Well, I blame that. 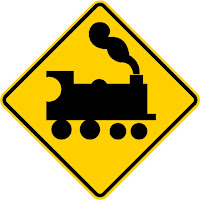 Instead of our usual discussions while driving back up the Big Hill – of ontology, epistemology, or Soxy the cat, I notice we're parallel to the train tracks leading to Armidale, and there's this sign to the left of us.

'It's just the sign indicating there's a railway crossing to our left, my doctor.'

The 'my doctor' bit seems half-hearted.

'But I wanna see the train!'

'We can sit here and wait two hours for the train if you like. But it's the same train that passes within fifty metres of our door at 6.12 pm every day.'

There's an irrefutable logic to that and I realise I'm on safer ground with existentialism, dialectical materialism or the transcendental idealism of Kant. You know – those -isms for which you have to sneak back to a dictionary to check their meaning when no-one's looking, which means you never really understood them in the first place. Like necessitarianism. Quoi?

I extend the charade briefly by crossing my arms, looking huffy and sticking my bottom lip out, but we quickly leave the train joke and the plains behind us to begin the ascent to the high country. We sit in silence as the outside temperature gauge reading on the Forester dashboard drops sharply as we climb.

It's the silence of What's in the Envelope. I feel as if Damocles is sitting quietly in the seat behind us, his eyes boring into the back of my head. The Brian area.