home | WHAT'S NEW! | stories from my past
You know, when I think about it, it's no wonder that my mother lived to nearly ninety. After marrying my father and taking on the role of a dairy farmer's wife, she had a tough life. I mean, really tough - and I don't know the half of it, because I was a kid and, like any other kid, I just accepted that things were how they were.
I was going to write today the next part of life in the dairy from my point of view, but I woke up thinking not about that as what it must have been like for Mum, and to the extent I know, for my sisters.
There was a clear division of labour in the household, though some tasks carried over into a joint venture independent of gender. Some women's and girls' tasks were indeed women's business and men stayed out of them, while others were men's. Neither would have wanted it any other way, given the attitudes of the time. I won't go into that. You can easily work it out even if you don't belong to that generation.

When I was really little, we lived a life more akin to the nineteenth than to the twentieth century, and the brunt of this fell on my mother and older sisters. The kitchen had an old cast-iron Crown stove; not even a Rayburn slow combustion model owned by some of our relatives and friends, even in Calliope itself.

All crockery and utensils were hand-washed and dried. There was no running water in the kitchen; just a tap from the rainwater tank in the corner near the stove. There were no cooking gadgets that came with the electrified life of the cities - just pots and pans blackened by the fire in the stove. There were mops and brooms; no such things in the house as vacuum cleaners! Those would have been regarded, especially by the men and even with electricity connected, as somewhat frivolous luxuries. After all, their own mothers did without them, didn't they?

The best example of all this, and how well it shows up the sheer drudgery of housework for my mother, was washing the clothes. It wasn't even glorified by the term, doing the laundry.

There were three basic implements; a copper boiler, the washtubs and the clothesline. The copper vessel had to have a fire set under it, filled with tank water and brought to the boil. That meant the water had to be bucketed into it, incidentally. And, if I remember rightly, there was no plumbing for the laundry tubs until we got the Simpson Wringer-Washer. The tubs were filled using a steel bucket and emptied the same way. The water used was usually put on the garden, often dying of thirst as it was in the Queensland heat.

Dirty clothes were sorted into piles according to types and colours and ones where the dye might - or would - run, men's clothes and unmentionables that didn't exist as far as I was allowed to know or would have understood. Each load was boiled. I can still remember them bubbling away gently like the Christmas ham cooked in the same copper at that time of the year.

One thing's for certain; anything washed in that copper was sterilised, and maybe cleaner in that respect than clothes that come out of many automatic washers these days.

Each steaming item was dragged out of the copper by a pole (usually an old broom or rake handle) into a laundry basket, woman-handled to the tubs to have the detergent (Rinso, in our case!) rinsed out of them. By hand. The item was then wrung - again by hand, preferably between two or more women or girls in the family. It would go into a rinsing tub, white items with Reckitt's Blue.

I don't know what was in Reckitt's, but it whitened the clothes markedly. They'd have been a dull grey otherwise, after having the bleach boiled out of them to within an inch of their life.

It was also a great curer of poison insect stings - ants and wasps and hornets. Many a kid walked around with an arm or foot stained blue by the Reckitt's. I don't know what it would have done for a Redback spider, because more by good luck than anything else, I never got bitten by one. Even Reckitt's has its limits.

Anyway, the clothes went through that second rinse while another load was simmering in the copper, and wrung out again. They were then carried to the clothesline, quite a distance from the house, out where the breeze was best. 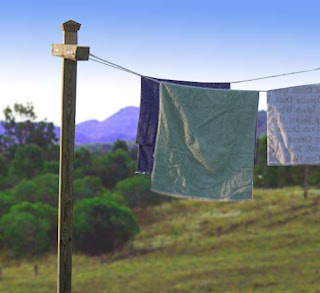 Don't be silly now.... We didn't go in for that trendy stuff everyone downtown was having installed in their backyards. We had a real washing line, with the line being held up in the middle by a sturdy forked pole as in the background below.  (Ask Tracey; even now, we don't have one of them newfangled Hills Hoist gadgets....)

Wet washing, even wrung out with all strength mustered is damned heavy. Woe betide washing operations if the pole was dislodged and the washing came down in the dirt. That occasioned a good deal of grief, as it was back to the rinsing tub (at best) and the whole operation repeated.

In short, nothing was simple and not much was made simpler that might have been until we got electricity. The washing machine, however primitive the wringer model would seem now, made things much easier even if it didn't save much time. Mum had washing to do for four young kids and I guess that would have been pretty much a daily operation at times. Plenty of stinky nappies too, I don't doubt. 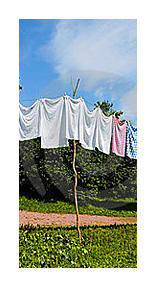 Often clothes were almost dry in the hot Queensland sunshine and a bit of an easterly breeze before the last ones were pegged up. As soon as possible, clothes were unpegged, folded and brought in. I won't dare go into ironing, but just think flat-irons on the stove and agonised howls from teenaged girls when they ironed a black mark from the stove on to their Saturday Night dance dresses.

Washing was just one part of the operation, and Mum had no choice but to do it solo until we got big enough to help to make the manual load lighter. She also came to the dairy to do her part of the milking for hours on end. 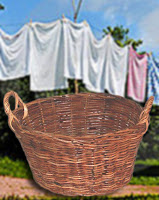 Such was a tiny slice of the early married life of the Grammar School educated teacher who could spout Latin and French in the dairy while shovelling cowshit. But she taught us all the Latin and Greek roots that have been invaluable ever more to me, from Grade 1 to a Ph D thesis.

Now you know why scholarships have been created in my name to educate Bangladeshi girls, so that even if they are unable to do anything else, they can teach their kids to read and write.

Much, much more could be said about my mother and her courage and joys and great sorrows, and the part my sisters played in farm life. They may tell those stories themselves, and make them part of the great historical archive of this country, along with those of the males, who think their contribution is so much more important.

It isn't. And fellas, we're not tougher either. That's why my mother made it almost to ninety.
home | WHAT'S NEW! | stories from my past
Posted by Denis Wright at 12:18 PM