It's Australia Day, and, I've no doubt, will be celebrated in typical Australian style one way or the other, regardless of some dire weather forecasts for the day.

What many in Oz may not realise is that it's also one of India's special days, a day which in many ways compares with Australia Day here.

It's Indian Republic Day, though it's easy to get things confused, because Indian Independence Day is 15 August, the anniversary of independence for both India and Pakistan in 1947. But unlike the trauma of that event, Republic Day is a much more joyful occasion.

So it was that on Friday, 26 January 1973, I was in New Delhi. I'd had a leisurely breakfast at Vishwa Yuvak Kendra, the International Youth Hostel in the suburb of Chanakyapuri.

In those days, Delhi still retained some of the charms of a large village rather than the frantic urgency of a modern westernised city. In 1973, it still had the scent of the smoke at dusk from, and aroma of, countless domestic cooking fires outside the small dwellings scattered round the city.

I noticed that there seemed more activity than usual that morning. A lot of people were headed in one direction, towards the centre of the city.

'What's going on?' I asked the grey-haired gentlemanly waiter who always brought us breakfast.

We always had a joke as he would rush fresh-cooked steaming chapatis to our table. Some mornings I would have a boiled egg for breakfast.

'Ek egg?' he would ask, and we'd smile at the pun on the two words, because 'ek', meaning 'one' in Hindi, sounds almost identical with 'egg'.

We'd laugh. It was a weak joke, but it was ours. 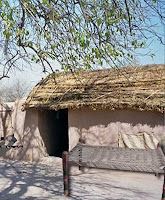 He had a little hut just across the way from the hostel. I'd see him walking to it sometimes, after work, in his neat uniform; a tall, slim proud man, his back straight as a die. His wife and children would greet him, and he'd sometimes sit cross-legged on the charpoy beside the front door as a friend would drop by.

'The parade,' he said. 'That's where all those people are going. They're walking to Janpath.'

'Why not walk with the crowd?' I thought. Good exercise. It's a fair distance.

It turned out to be an interesting walk at a smart pace, just tagging along with a group of men and women in traditional Punjabi dress. They were smiling, inclusive, happy.

For one thing, we didn't necessarily go along roads; we went through wire fences, little alleys, private (in theory!) backyards, over low brick walls, down tiny lanes between dwellings... places you'd never go without people who had an idea where they wanted to end up.

Janpath it was. People took up vantage points and the parade started.

I wish I had pictures of it, but they are on slides, unscanned, and I don't have time or coordination to fiddle with them any more. You'll just have to take my word for the colour and spectacle, but I will mention just one thing.

The Camel Corps. If you've never seen military or racing camels, then you won't truly appreciate what magnificent beasts they are, and the spectacle they added to the parade. Tall top-bred Dromedaries, they were as proud and fierce-looking as the men mounted on them. Clipped neatly and perfectly all over, they had the shape of sleek, elegant greyhounds with slightly pyramidal backs. They were trotting along at a perfectly uniform lively gait.


That was my enduring memory of the Republic Day parade of 1973, with all its pomp and splendour as it moved towards Rajgat.

Expect the unexpected when you go to India. I've been reminded of that many times over the past forty years. Never imagine you've seen it all.

We'll share our day, India. I won't even mention the cricket!