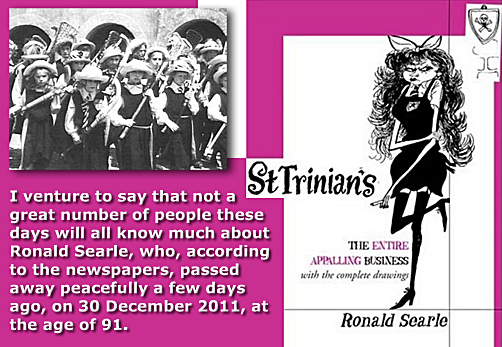 I don't know all that much about him myself, but I do know about what or who he created - those smart, wicked, inventive girls of St Trinians who delighted adults and kids in films with antics that became the stuff of legend.
I don't even know as much about his cartoons as I should, but Ronald Searle's enduring fame rests on them. What I can see now with crystal clarity is that his style of cartooning influenced that great and mysterious art form for a generation. Others who know this black art will speak on that with the authority I lack, and I leave it to them.
At Teacher's College I stayed with my aunt and uncle and my cousins in the early 1960s. Uncle George was a serious man with an incisive mind, but had a keen sense of humour as well, and nothing brought it out so much as the St Trinians black and white movies of the era. His chuckles through these movies remain with me and I suspect it was their infectious nature that added much to the fun of watching them and make the memories so vivid.
The thing about the belles of St Trinians was their constant 'up yours' to authority, their great schemes which always came off because of the sheer creativity of their naughtiness. Is it going too far to say that they made their contribution to the Women's Liberation Movement that was about to break like a tidal wave over the western world? I'm not sure, but of one thing I am. They jolly well did it on their own, old thing, sometimes with hockey sticks and lacrosse racquets, evading house mistresses in the dark passages of St Trinians dorms as they wove their nefarious schemes and brought them to fruition. They were absolutely free spirits, working the structures of authority exactly to their own advantage.
There was, I see now more than I ever did before, a great deal of the Ronald Searle slant on life in their attitude.
home | WHAT'S NEW! | stories from my past
Posted by Denis Wright at 8:22 AM