home | WHAT'S NEW! | stories from my past
There are some coincidences that seem remarkable, but then I guess for every one we notice, all the millions of possibilities that might have been we never know about, and never will.

So it was when I wrote down on my 'stories to write' file that it might be amusing for people in 2012 to see classic bureaucracy in action as it was in India in 1972 when I was there. You might also call it job-sharing. Hinduism is such a maze of castes that job-sharing comes naturally; work is all dished out in small parcels.

I was going to write on my experiences of this in the Post Office in New Delhi when trying to post parcels of Indian books back home forty years ago, but my ace in this game was trumped well and truly by this experience just last week written about by my friend Michael. He and his wife Julie travel frequently to the subcontinent, and are veterans of journeying around India.

I had intended to post a few items of Julie's on my blog, and still will do so, because no-one captures the flavour of India quite as well as she does. But just because of this coincidence of my recollection, my intention and his experience, Michael's parcel-posting story will come first. Here it is. This is no exaggeration. What amazes me is that nothing in forty years seems to have changed in this respect, except for novelties like flash drives and photocopiers.

All the images (photos taken at the hill station of Dalhousie, way up to the north in India) are Julie's, and came with the parcel-posting story. In an earlier edition of this piece I said they were Michael's. I haven't attempted to caption them. 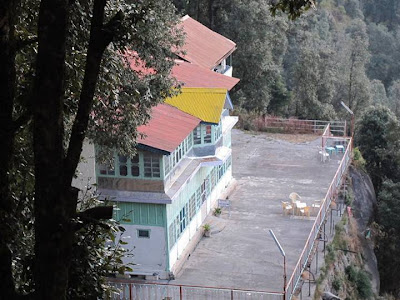 We had one parcel and a large envelope to post in Dalhousie. We tied and taped up the parcel, then Julie and I headed off to the Post Office at Gandhi Chowk, which we had seen on an earlier trip - a large and official looking place. Surely it should be fairly easy to prosecute our small task in this place.

The clerk behind the 'Multi-business' window told us there was no wrapping at the PO, but we could get wrapping and the wax sealing done at the 'Emporium' shop across the Chowk. He also said we had to wrap up the large envelope as well, as it was really a parcel. In India all parcels have to be wrapped in calico cloth and sewn up. This is usually done by a tailor or often parcel wrappers sit outside Post Offices (but not in Dalhousie). Then the sewn seams have to be sealed with wax. They light a candle and liquefy a stick of wax in it, smearing the seam in a spot with the wax and pressing with some kind of seal, which may be just a flat piece of metal. I was surprised they couldn't treat our large envelope as an envelope, but then, this is India, so wrap it we must.

The Emporium said no - couldn't do that there. So I went to the next shop - same story. Then in the fourth shop they told me there was a tailor 'downside', but we had to buy the cloth from him. We decided to just find the tailor and see if he had cloth. Sure enough, on a small street that wound down from the Chowk we found a very noble tailor who indicated 'no problem'. It's such a relief to find someone who says “No problem” in India, and often adding, “Why not?” as if it's the commonest thing in the world to fulfil your request after you have been traipsing for hours or days to get something done.

I had forgotten my felt pen, which I had thoughtfully remembered to bring from Australia. You have to write the addresses (From and To) on the calico with a felt pen. But I'd left it back in our little cottage. Julie and I went back to get, and I returned alone to complete the simple task of postage. The tailor indicated he couldn't do the sealing. “Upside” he gestured. I asked the PO but they again told me the Emporium would do it. 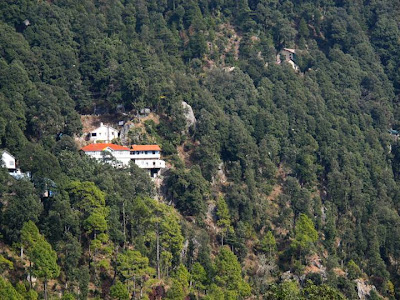 No, the Emporium couldn't, so again I went next door (“No”) and next door. “Yes. Why not?” said the man, “Take a seat”. So I sat in his shawl-and-sari shop while he and another man set about the sealing task. It was quite pleasant, and took about half and hour. They were very thorough, in-between receiving old friends and talking with a bunch of men sitting together with their hands under a common blanket, over a fire pot or heater I assumed. Turning the parcels over and over to find any remaining spots that needed sealing. When it was done I said, “How much?”. “No money” they said with the characteristic head and hand wave (palm upwards and twisting) which Indians do when they mean, 'it's for free' or 'I haven't a clue'.

I then realised being in the cloth business each of these shops always sent parcels off, and as such did their own wrapping and sealing. The first two shops couldn't be bothered, but the third didn't charge because it wasn't part of their main business - they were just happy to help me out. It is funny how often Indians will spontaneously act out of no self-interest, just as they will try to rip you off if they can. All depends on how they feel, or who you meet. 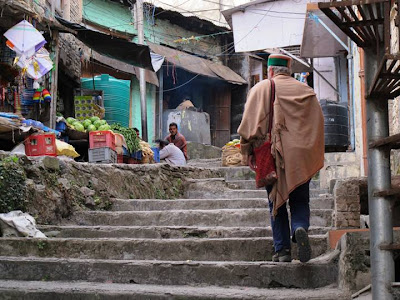 Back to the PO. I had to fill out a form they said, as I juggled my parcels, and spoke to the same man who was now at a different counter - the 'Savings Bank' window. He wandered aimlessly around the office for some time, looking through the door to something noisy happening there, then seemed to remember me and dived into a few drawer0s with the help of two other men, at a different counter. All the time I was trying not to show my apprehension - surely the next obstacle won't be insurmountable! It nearly was.

“We have no forms.” He said. “Only this one, and you need four - two for each parcel.” He added as he held up a faded crinkled piece of paper he had dug from the back of some drawer. “Take this and photostat three more.” “Where?” I said. “Outside.”

Juggling my parcels I asked the Emporium. “Downside” they said. Down the lane again, and found a photo-printing shop. “No” they nodded, “next door”. Please let this be easy I prayed - surely it won't all come unstuck now. Next door the attendant said “Yes, come in.” Thank Hanuman I whispered, as I entered their little shop. Then began an exchange between him and another man who was standing on his chair lighting some incense in a high-up tiny shrine typical of such shops. “No,” They turned to me, “it's broken.” Bummer. “Where?” I asked. “Backside” they said and indicated they meant along a lane which runs off level behind the Chowk. 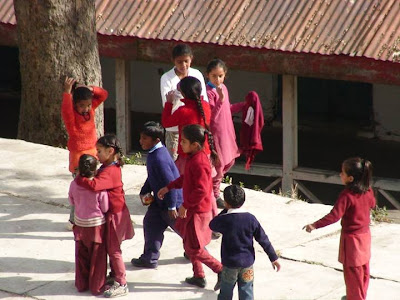 Up the lane I went, and once again dodging with my parcels between two of the three different games of cricket that were been conducted on the Chowk, I walked along asking for 'photostat'. “At the end of bazaar.” Someone told me. I reached the last few shops and there was a computer game shop which looked promising, except this man had been useless on a previous occasion when I was trying to have train tickets printed out from a memory stick, plus he had some angry dog in his section of the shop which was behind glass doors, so I was not feeling hopeful.

I entered and opened the glass doors - dog was gone, thank Hanuman. “Yes, why not?” he jiggled his head, and directed another man there to do the job. This guy took my form and we went next door into the pool-table shop, behind the players and lo-and-behold, there was a big photocopying machine, which did the job. I got four copies - couldn't bear to leave the PO without at least one parcel posting form, for the next poor unfortunate poster.

Back to PO, forms in hand. The man was now at a different counter again. He told me what to write on the form, and after three goes, back and forth across the empty Post Office to adjust details, we both agreed it was correct. He weighed them up, printed tickets (could he possibly print from a memory stick I thought, but put that insane idea aside) and pasted them on the parcels. At which point he stressed I should write 'Parcel' after 'Air Mail' on both parcels. For Hanuman's sake I thought, surely they can see it's a parcel? Could he borrow my felt pen to write it on? Yes of course - anything to complete this bizarre experience successfully.

Next he had to write the postal ticket numbers and PO name on the parcels, but unfortunately his biro wouldn't work. “Could I borrow you pen?” he mumbled in broken English. “Sure.” I pulled it out - anything more you'd like for me to do to help me get this place to operate? I felt like saying. But actually, I sensed the blood of success very close, and didn't dare deviate from task-focus for a second. Anything could still go wrong!

But no, he finished off his part, handed back my pen, and went about his business. “Is that it?” I asked, in trepidation. “Yes, why not?” he replied. “All done.”

There's one very important thing I just remembered that I wanted to say about this system. In my experience, every package arrived at its destination abroad in mint condition. Being sewn and wax-sealed in strong calico, there was no chance any of the contents could go missing, and the registration system for packages made the chances of its disappearing very small.
This to me was always the thing about bureaucracy in India. It could be painfully slow and tedious, but in the end, things got done.
There's a joke even the Indians themselves make about "Indian Standard Time". I've had a lot of experience with it over the years. It has its own sequence and its own rhythm. In the modern terminology, it's definitely serial processing, not parallel. It pays to be patient, persistent and forgiving, if you don't want to die of frustration and western-style rage.... but it works!
home | WHAT'S NEW! | stories from my past
Posted by Denis Wright at 12:45 PM