Mr Curtis was talking to Mrs Dart one morning as we sat down after singing God Save the Queen.

"They're putting a new wing on the Roman Catholic college in Gladstone."

"The Stella Maris College," she said. "I heard about that." ...which wasn't surprising as her father was Regional Director of Education for Central Queensland.

I was in Grade 4, aged 7, going on 8. Yes, I started school early, but being in Grade 4 meant the transition, in our two-roomed school, from Mrs Dart's Grade 1, 2 and 3 room to Mr Curtis's Grades 4 to 8. That made me the youngest kid in the big room.

Old Jim, as we called him, turned to us.

"Does anyone know what 'Stella Maris' means?"

I shot up my hand. No-one else was keen to have a go.

"Ah... a book." He turned with a knowing smile to Mrs Dart. "You see? His mother went to Grammar School."

It was true that she had, and that I had read it in a book, but what I didn't tell him was that I knew the Latin under slightly false pretences. It wasn't that I'd met up with "Stella Maris" in some lofty tome.

I'd been reading my Best Book of Stories for Boys and Girls, one of which was about these toff kids who were home for the summer from their boarding school (think Hogwarts or Narnia types) and had found this boat in the river near their home (as you do), and they did it up a bit with a coat of paint and a new mast and sail (as Public School kids can). That was stuff any properly educated kids can whip up with a hammer and paintbrush. But they needed a name for her.

In one respect their education had been slightly askew. The eldest of them knew a good name, he said. He'd seen it in fancy writing on a sign down at Birchington on an earlier holiday.

Stella meant a star and Mavis – well, he wasn't exactly sure. They all agreed it was a jolly ripping name and the Stella Mavis was launched. 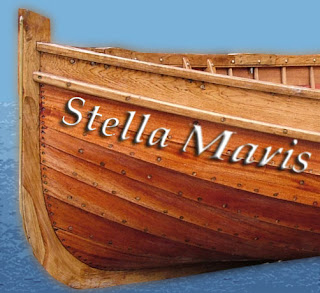 The story did go on to explain that the old-style script had tricked him into thinking that an "r" was a "v" and that Maris was related to the sea, but they stuck with "Mavis" anyway because it was a splendid name for her, a vessel that now looked incredibly stylish to me for something they'd found abandoned in a swamp.

And they had lots of adventures in the Stella Mavis catching international spies and criminals who can't outwit English Public School kids, no way.

But you see, that's how I got to know "Stella Maris" was "Star of the Sea". Explaining about the Stella Mavis somehow took away the triumph of it all. I wasn't going to do that. If Old Jim thought I had been pouring over Latin texts at the age of seven, who was I to tell him?

And that's how I came to be thinking about roots.

I told you I'd get to it. All will be revealed in the second (and final) part. But right now the vital startup drive on this computer is making seriously ill noises, and I have to turn my attention to that!