The truth about cats and dogs - DOG

home | WHAT'S NEW! | stories from my past
dog | cat
...one dog and one cat, to be more accurate; namely, Teddy and Soxy.

These are not wildly original pet titles, I grant you, but then names like "Chainsaw", "Sprocket", "Pea Soup" and "Hamburger" may well suit other people's dogs or cats better than ours. These banal names, Teddy and Soxy, suited them well enough, so originality is irrelevant.
They never knew each other, Teddy having gone to a lovely great green field in the sky with fascinating smells under hedges before Soxy came on the scene. 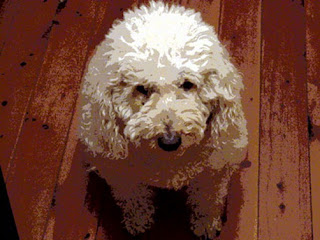 I came to know Teddy only when Tracey and I got together, as she, Christian and Teddy were the live parts of the family pack who arrived in her Mazda 323, independently of the removals van.
There is very little to say of Teddy that is bad. He was a poodle. I confess I had my doubts about poodles before meeting Ted, having been reared on a canine diet of cattledogs, and to be frank, I suspected he might be the weakest link in the live-in deal.
Comparisons are odious, so I make none further, except to say there were no weak links at all. No-one had to leave the Big Bro household and the Tribe was not required to vote and have someone's flame extinguished. All four of us stayed in happy amity. 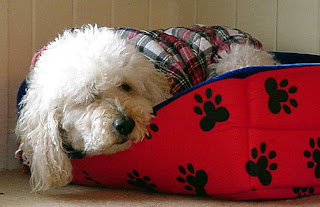 But a poodle.... Even the breed name is a bit wussy, you have to admit. Poo-dill. When a cattledog marks his territory, it's on three legs, mate, the fourth thrust aggressively in the air, a precious measured-to-the-millimetre squirt on a treetrunk, or a car wheel, or similarly appropriate place.
Not Teddy, for whom the marking of territory wasn't an agenda item, even under Other Business. He squatted like a girl and emptied his considerable bladder all in one spot, and that was all the territory he asked for. If any other dog, including the grumpy scruffy little terrier Muttley from next door invaded our garden, Ted adopted a commendably Taoist approach. In Muttley's case, he ignored him, as if he were another species entirely which, given Ted's genes and those of Muttley, I sometimes suspected to be the case.
Here are his qualities which made Teddy a winner when matched to the Selection Criteria.
Points for:
Points against:

This problem was solved by promising to take him for a walk immediately after his bath. A walk was something of which he was inordinately fond, and as the bathing drew to a close and Tracey towelled him down, he would shiver with anticipation mixed with a hint of impatience.

As he got older, the effort of all this got a bit much. He would bound down from the bath, complete three circuits of anyone in the vicinity, look for his leash, and strain at it going out of the gate like Captain Scott's lead husky before they ate him, and off we would go.

But by a hundred metres up the road he would begin to falter, finally slowing to a crawl and wishing he were on the sled instead of the venerable Antarctic explorer. All his get-up-and-go just ... well ... got-up-and-went. He never learned to pace himself from the moment of leaping down from the bathing to the end of the walk, the conclusion to that exercise being a rather sorry affair.

There are just two incidents, among many, with which I will conclude the Ted saga.
The first was his amazing ability to drink water, always in waltz time. I kid thee not. Firstly, having retained about five litres of fluid in his bladder for several hours, he would sit at the door till let out, do his girlie pee at a spot of his choosing (usually at the foot of a rather troubled Japanese Maple), and head for his bowl of water immediately on re-entry.
Ted believed with great conviction in the principle that what goes out must be replaced; the sooner the better. He would therefore commence drinking immediately. 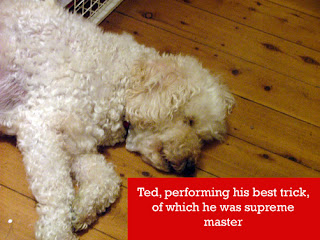 I think he would hypnotise himself with the charm of his rhythm, his brain somewhere along the shores of the Blue Danube, because he would forget to stop drinking. Seriously. After what seemed an eternity involving the entire Strauss repertoire, Tracey would have to say, "Teddy – STOP!" which would break him out of his trance and he'd lumber off to the front of the fire, with all the grace of a fully laden bulk coal carrier heading out of Gladstone Harbour for Japan. Mission Accomplished.
"Idiot dog," Tracey would say nightly as the ritual was repeated.
Sometimes he would go back for a recharge in the early hours of the morning, everybody in the house consequently experiencing troubled dreams that they were Dancing Waltzes with the Stars to the LAP lap-lap, LAP lap-lap of Teddy's tongue.
Dieu merci it wasn't the tango. 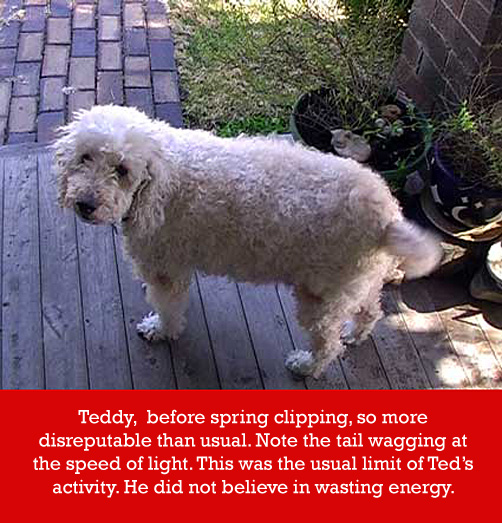 And the last thing. There is one thing about poodles that makes them clear winners as house pets. They don't have fur. They have wool – fleece so fine you could sell to the top Italian knitwear buyers at auction for ten thousand cents a kilo, under the guise of superfine Merino. Well, maybe not Ted's, but a fleece from one of those elegantly manicured uppity poodles with sissy pink bows and coloured claws.
Poodles do not shed. Not a doggy hair on the carpet or your clothes will you see. No allergens. This of all things is their greatest asset.
Poodles are renowned for their high intelligence, which they may use for good or evil. Teddy had no trace of evil in his composition. But... I don't think he was particularly blessed in the brain department either. Something had run low before his Maker got to the end of his gene sequence. Or maybe Ted had gone for a drink of water and had forgotten to come back to claim his full neurone allocation.
This was demonstrated one night when he shared this study with Tracey and me on a cold winter night, an electric heater to warm the room. He liked our company even more than the glass-fronted fire in the lounge, so he blessed us with his.
We became aware of a strange smell; not one of the highly offensive ones Teddy could sometimes be responsible for (especially after a side of beef and profiteroles), but an even more unpleasant one. Burning.
We looked at Ted. He had his highly insulated woolly head hard up against the grill of the radiator heater; sound asleep, blissfully unaware that he was cooking his tiny brain. The wool on his head nearest the heater was changing colour to something you see on scorched cream carpets in house fires.
"TED – Get away from the 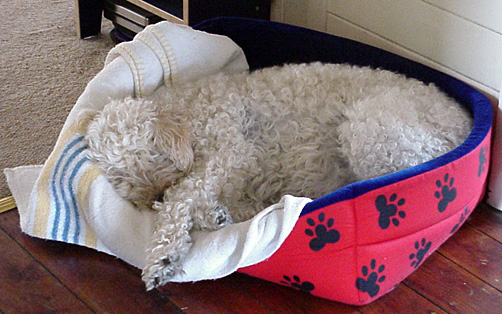