Four seasons and a wedding 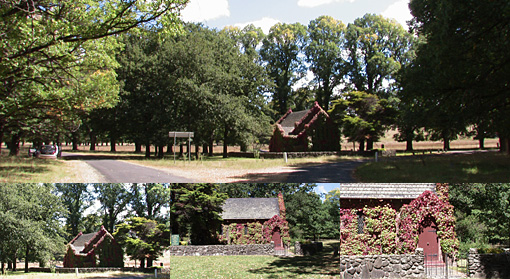 On Anzac Day, 25 April 2012, we made our annual pilgrimage to a charming little place about half an hour's drive from Armidale – to the chapel at Gostwyck. Many people from round here do that; not necessarily for religious reasons.

Nevertheless, it is a place of worship, and services are held there regularly. But although the sanctity of the chapel is respected, most people, especially a lot of tourists who know about it, have no religious purpose in going to this little place.

Or perhaps I'm wrong; they do worship, but not so much a Christian God as the way an exotic Nature has clothed in spectacular garb, every season, what would be a quite ordinary little church. The Virginia Creeper covers it in shades of green in the spring and summer, and in autumn especially it becomes a mecca for photographers as the greens give way to multicolour hues of pink, red and purple. Autumn is when it's at the height of its charm.

I could easily fill this posting with images, but not ours. If you go here you can see a selection of photos of the chapel from every angle, in all its seasons. But the few you see here are ours, the tiny ones taken in late summer 2008. The two larger ones towards the end were taken by Tracey on this Anzac Day 2012. They are what inspired this posting.

The weather outside the car was cold as we circled the chapel. It seemed a bit forlorn and patchy, like an animal shedding its thick fur coat. A bit tattered, in fact. We're used to seeing it in its full glory.

We got out of the car and had a closer look. Though we've seen it many times, it's not a place you just drive to for half an hour, do a circuit in the car, and go back home again. It may be past its best for the season, but it deserves homage.

It is a grotto of genuinely sacred space; not completely because of its religious purpose, though undoubtedly enhanced by it. No matter what religion, or none, or just a lover of the natural spirit in all living things, you'd have to be unfeeling not to appreciate it. It's the live Technicolor Dreamcoat over its regulation brick exterior that does it.

There are no other buildings within a kilometre. It's just the chapel and the giant pin-oaks that surround it; still green because their time hasn't yet come – the time for their leaves to turn to gold, fall and rustle on the ground under children's boots.

As the sun dips lower, the light changes. The season has been a wet one, and there's greenish moss on the roof. A few Virginia vine leaves are still green amidst the variegated reds. There's an odd one amongst them reflecting gold.

The sun now lights the southern wall and somehow its brightness illuminates all the vine leaves and gives the chapel a soft glow, as if the large oaks have trapped the light inside the circle, the handsome green and grey stone wall in front drawing a line under the scene. 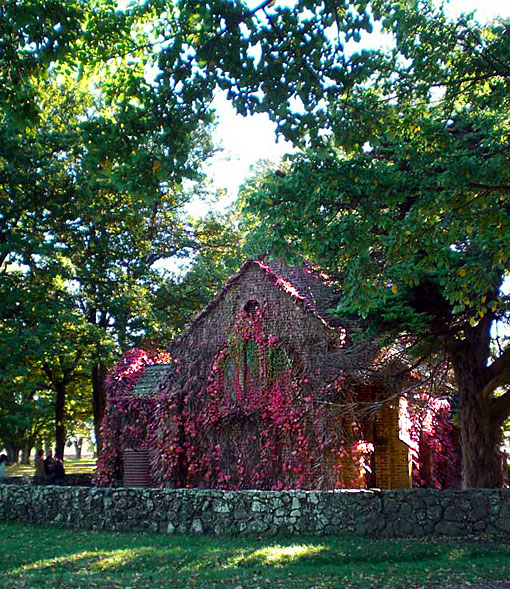 I don't expect it to be this beautiful. It's like it's decked out for a wedding.

Our very good friend Austin had a nice turn of phrase: "When Jacqueline and I were stepping out....", he used to say, indicating the time when he and his wife were a-courting. And he'd proceed to tell an engaging tale. (Not the one below; that's mine.)

Thirteen years ago, when I was a-courting Tracey, and I mean, in the very very early stages when she had not the slightest intention of ever doing anything with this man apart from seeing the tourist spots round Armidale, we went to this Gostwyck Chapel as part of the itinerary.

That was after we'd gone to Dangar's Falls, where, I discovered only long after the event, Tracey was a life-time sufferer of vertigo.

Unaware of this and not having been told by She Who Was Too Shy and Petrified To Say So, I took her to the very top of these falls. This did not augur well for the occasion; nor, I daresay, for the stepping out, which had encountered its first hurdle at the top of the Falls overlooking the deep gorge.

On that day in 1999, we got out of the car and walked around the chapel to the bridge over the clear stream of Commissioners Waters, where once I had seen two huge golden carp. Giant goldfish, they were.

I'd hoped to see them again this time; or rather, that we would, but it didn't happen. I can't imagine why not – after all, it was only fifteen years since I saw them there last.

As we walked back towards the chapel, the strains of a melodious chorus singing a joyful hymn came from inside, and then the side-door opened. Out came a bride and groom, snow-white gown and black tux, amid the guests spilling out to greet them.

.
We had no camera between us, but the memory is all the sweeter for that.

Tracey glanced sideways at me with a look of vague suspicion, the unspeakable question in her eyes.

That was the unspoken answer to the unaskable question.

Mills and Boon couldn't have handled things better. Not in a million years. Or was it the Bloke in the brilliant blue skies above the chapel nestling amongst the pin-oaks?

You gotta wonder sometimes. Amidst all the contradictions and the mystery, yeah. You do.