home | WHAT'S NEW! | stories from my past
family farm 1 | family farm 2 | family farm 3 | family farm 4 | farm 5 <<you are here
This is the final part of my mini-series on milking the cows.
By the end of Part 4, I finally managed to get milk into the cans; now let me tell you about the final stage for one milking session.

By the time I could really help, we had acquired one other essential piece of equipment. A car. A brand new 1957 Holden ute, i.e. paid for in full with a cheque on delivery from Anderson's Motors. 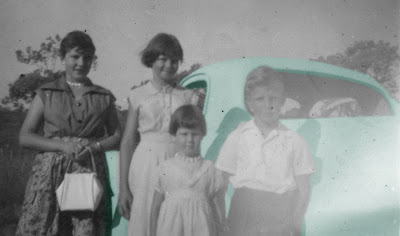 I've colorised the Holden! This is "Surf Green"
Paying something off was a concept never envisaged in Dad's world. You bought something only when you had the cash for it showing in the bank account. Until then, you did without it. Nor would you buy something second hand. That was inheriting someone else's trouble, in his book.

'Surf Green' it was, according to the Holden colour chart. I'm not sure surf is that colour, but it was close enough. NBT 372 was the number plate. 'No Bloody Trouble' it stood for, Dad would say with pride. The ute changed our lives a great deal for the better.

EnnBeeTeeThreeSevenTwo was backed up to the shed 'cargo bay', and we'd load the milk cans into the back. Each can had a brass plate welded on, the owner's name stamped neatly on it.

The milk cans were solid and heavy on their own, which they needed to be.

Full of milk, they weighed quite a bit for a kid of 10. Lessee now, remembering my school tables, the cans would weigh say 10 lbs at least on their own, a gallon of milk weighs 10 lbs, 10 gallons to a can, so 110 lbs per can to move from the dairy fridge into the tray of the ute.

That's 50 kgs for you decimal babies. Throw that around just by grasping two little handles, without removing one of your bare toes, chillen.

No wonder I once had biceps and triceps from milking the quadrupeds - quintessentially, dare I say? (This sentence would have been my entry for the Bulwer-Lytton awards, were it not for the fact that they are for fiction, not narrative.) And little wonder, with those muscles, I was able to break School Bully's arm owing to an Affair of Honour at High School.

Sigh. Look at those arms now.... No, don't. You'd never guess these days.
By the way, the winner in the purple prose section of the 2011 Bulwer-Lytton competition was this:

As his small boat scudded before a brisk breeze under a sapphire sky dappled with cerulean clouds with indigo bases, through cobalt seas that deepened to navy nearer the boat and faded to azure at the horizon, Ian was at a loss as to why he felt blue.


But I digress, I confess, no remorse for the mess. Now I return:

The milk was handed over at the depot. We kept our own record of how much milk went out daily in the various sized cans we had. The empty cans would be back at the depot down-town by late afternoon, steam-sterilised at the Butter Factory after they emptied them.

At least we hoped they were sterilised, but you couldn't take a chance on that. Strange things have found their way into food containers, haven't they? We re-washed them scrupulously before milk went into any of them. Lots of boiling water and CalHypo were required.

On that subject I must add this. When our milk arrived at the PCD, samples were taken routinely every few weeks, and a bacteria count done. Mostly, the milk passed, but a few times I can remember, disaster struck. It may have been just that the can tested had a higher than usual count, but whatever; if your sample failed the test, when you came to pick up the empty cans in the afternoon, you'd find your entire day's milk production returned in full. One-seventh of the week's income was gone.

But that wasn't the worst of it. This was a crisis. It meant that before next milking the following morning, all the milking machine components; many metres of pipes, teat-cups, vats, buckets, the shock-cooler, cans - anything that came into contact with the milk from udder to can - would have to be dismantled, sterilised by a complicated manual process I won't go into here, and reassembled before dawn the following day.

Hurricane lanterns would be set up for the night's work (no electricity, don't forget!), tons of water boiled in a copper over a wood fire, and the job worked on non-stop till it was done.

The only beneficiaries of the disaster were the poddy calves, who would be given as much of the creamy returned milk as they could hold (this milk was not contaminated, and all farmers know by the smell when milk is even slightly off.) The calves' bellies stuck out like balloons afterwards; they must have welcomed the rare change from skimmed milk.

What they couldn't drink was poured into the troughs for the pigs to squeal and bicker over. Jeez, pigs are... pigs. And if you think your kids have turned their bedrooms into a pig-sty, then you've never been near a real pig-sty. Stay upwind, that's my advice.

One last thing on this crisis. If you had your milk returned, they tested it thoroughly every day for a week to ensure that the bacteria count was down to their acceptable levels. It was an anxious week for the farmer, as another return would have been unthinkable.

A second failure in a week never happened to us. Few bacteria would have survived what we did to them after a milk return. If there were one miserable bacterium in there somewhere, it would have been damned lonely.

But back to a normal milking session. Any milk left over beyond our quota would go to the cream separator, and be given to the poddies, and the cream collected. What we did with that I'll tell you another time maybe.

You might think that's the end of a milking. No such luck. The really tedious bit now begins. All the equipment had to be given a normal clean and sterilisation, and there was a lot of it. The bails had to be swept out with a yard broom, or swilled out in mucky weather. The yards themselves had to be cleaned. I'd have the inglorious but necessary task of shovelling any newly created cowmuck into a barrow, and from thence to the manure heap. And boy, can't sixty or so cows produce some, in the hours while they wait to be milked! Barrowloads.

Finally, it would all be done, by about 10 am on a Saturday morning if we were lucky. Having taken part in half the milking, done most of the washing of equipment such as the myriad of cream separator bits and other tidying up, Mum would scoot off home to cook a proper breakfast for the workers, if Jan and Lyn weren't then living at home. Of course, if they were, they would have done as many household tasks as possible by the time Mum came home, including meal preparation, but everyone worked to full capacity. Idlers would have got short shrift at Sunny Hills.

There were plenty of other farm jobs to be done after breakfast; fencing, ploughing, farrier work on the horses, digging and watering the vegetable patch, periodic mustering and dipping.... no end to it.

Oh, let me remind you. Most of what I've described in the previous two parts was just one morning's work. At 2 pm on the same day, the whole process would start again. Think on that.

That's twice a day, every day, of every week, rain, hail or shine. Farmers don't get holidays. Nor do farmers' wives, unless you count having babies as holidays. [I hear loud howls of protest. OK, I withdraw that remark.] Nor do their kids get much of a break, as often as not - except for school. And none of them can afford to get sick.


So. When you're sleeping in on a Sunday morning till noon after a leisurely Saturday and a massive night out, give a thought to the farmers presently being screwed by the big retailers into getting the lowest possible return for the relentless labour of an entire farming family.
If any group ought to be bolshie, it's those on the land. Where's that bloody guillotine? And don't you dare try to remind me that 1789 came before 1917 - I escaped from the farm by becoming an historian, m'kayyy?
home | WHAT'S NEW! | stories from my past
family farm 1 | family farm 2 | family farm 3 | family farm 4 | farm 5 <<you are here
Posted by Denis Wright at 3:35 PM