home | WHAT'S NEW! | stories from my past
They were all into it, you know. Addison, Bolingbroke, Congreve, Swift, and Pope, e.g., - the whole lot of them! They were all hooked on snorting the finely ground-up weed. Tobacco.
This is an extract from England in the Days of Old by William Andrews. I think you might like it. Snuff is good for your kids, for a start. So it says. Read on....

The Age of Snuffing 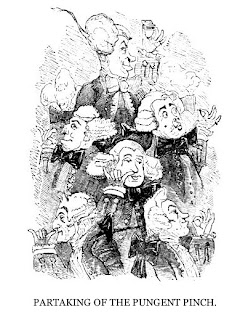 In this country old customs linger long, and although the age of snuffing has passed away, in some quarters the piquant pinch still finds favour. Our ancient municipal corporations have been reformed, but old usages are still maintained and revived.

In 1896 we saw an account in the newspapers of an amusing episode which occurred during a meeting of the Pontefract Town Council. One of the aldermen, noticing that the councillors had "to go borrowing" snuff, suggested the re-introduction of the old Corporation snuff-box.

The official box, in the shape of an antler, was unearthed from underneath the aldermanic bench amidst much amusement, and the Mayor promised ere another sitting the article in question should be duly cleaned and replenished with the stimulating powder.

Sir Albert K. Rollit, the learned and genial member of Parliament for South Islington, when Mayor of his native town of Hull a few years ago, presented to his brother members of the Corporation a massive and valuable snuff-box. The gift was much appreciated....

In bygone times taking snuff was extremely popular, its palmy days in England being during the eighteenth century. Snuff was praised in poetry and prose. Peer and peasant, rich and poor, the lady in her drawing-room and the humble housewife alike enjoyed the pungent pinch. The snuff-box was to be seen everywhere.

The earliest allusion we have to snuffing occurs in the narrative of the second voyage of Columbus in 1494. It is there related by Roman Pane, the friar, who accompanied the expedition, that the aborigines of America reduced tobacco to a powder, and drew it through a cane half a cubit long; one end of this they placed in the nose and the other upon the powder.

He also stated that it purged them very much.

Snuff and other forms of tobacco on their introduction had many bitter opponents. After the Great Plague the popularity of tobacco and snuff increased, for during the time of the terrible visitation both had been largely used as disinfectants.

There is a curious entry in Thomas Hearne's Diary, 1720-21, bearing on this theme. He writes as follows under date of January 21:--


"I have been told that in the last great plague in London none that kept tobacconists' shops had the plague. It is certain that smoaking was looked upon as a most excellent preservative. In so much that even children were obliged to smoak. And I remember that I heard formerly Tom Rogers, who was yeoman beadle, say that when he was that year when the plague raged a schoolboy at Eton, all the boys in the school were obliged to smoak in the school every morning, and that he was never whipped so much in his life as he was one morning for not smoaking."


"The hottest day that ever I felt in my life. This day, much against my will, I did in Drury Lane see two or three houses marked with a red cross upon the doors, and 'Lord have mercy upon us!' writ there; which was a sad sight to me, being the first of the kind that to my remembrance I ever saw. It put me into ill-conception of myself and my smell, so that I was forced to buy some roll tobacco to smell and chew, which took apprehension." ...

... Preachers of all sections of the religious world delighted in a pinch of snuff. Sneezing was heard in the highest and humblest churches, and it even made St. Peter's at Rome echo. The practice so excited the ire of Pope Innocent the Twelfth that he made an effort in 1690 to stop it in his churches, and "solemnly excommunicated all who should dare to take snuff."

Tyerman, in his "Life of Wesley," tells us the great trouble the famous preacher had with his early converts.

"Many of them were absolutely enslaved to snuff; some drank drams, &c., to remedy such evils, the preachers were enjoined on no account to take snuff, or to drink drams themselves; and were to speak to any one they saw snuffing in sermon time, and to answer the pretence that drams cured the colic and helped digestion."

Mr. Wesley cautioned a preacher going to Ireland against snuff, unless by order of a physician, declaring that no people were in such blind bondage to the silly, nasty, dirty custom as were the Irish. It is stated so far did Irishmen carry their love of snuffing, that it was customary, when a wake was on, to put a plate full of snuff upon the dead man's, or woman's stomach, from which each guest was expected to take a pinch upon being introduced to the corpse. 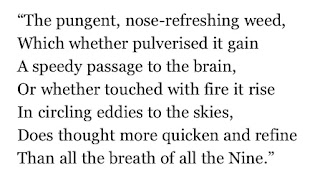 
What have the following two illustrations to do with the above? Nothing, but they were in the same volume, and I found them curious. 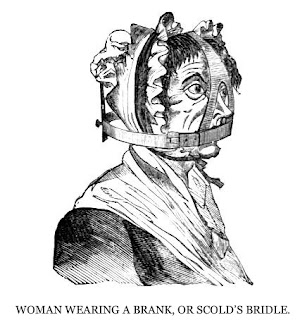 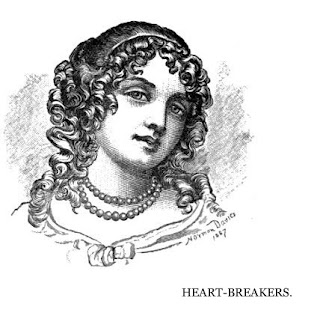