As a battle of minds between two opponents, there is no game in my experience of the world quite like chess. If you have never played chess, or don't like it, or constantly get your tail whupped no matter who you play, don't worry – this isn't a chess lesson. I've been beaten by too many players of indifferent quality to attempt that – not that you want one anyway.

What occurs to me is that a chess game has its parallels to the way cancer plays its game, but with one huge difference. Cancer cheats at every opportunity. Mr C sneaks pawns back on the board when you're distracted, or with sleight of hand substitutes a lost bishop for one of his pawns. 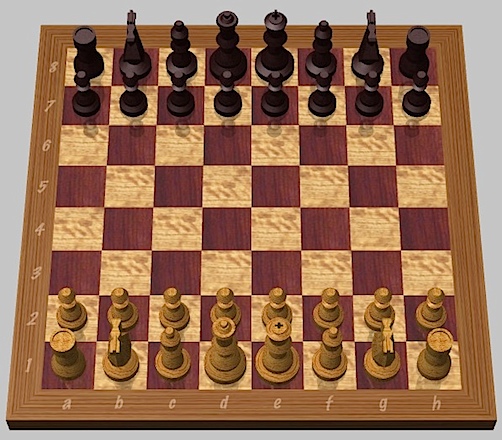 .
It's like this.  When you set up a game of chess, you have a King that needs protecting at all costs. He can't even be captured and removed from the board till the game's over.

You'd expect him to be the most powerful, hardest-hitting piece on the board, but he's not. He's a lousy fighter and can usually go only one square at any one move.

He's pretty useless really, but the game's all about keeping him alive. The game ends when he's so boxed in that he's trapped. Check turns into checkmate. Game over.

That's me, you see. The whole game centres on me. Playing against Mr Cancer, I am King, which, as you can see, isn't saying much really. The King's a wimp.

There's my army. Eight pawns forming a defensive line at the front to begin with; they are my infantry, totally expendable. They usually move just one square at a time, forward only. There's no retreat for them and they'll have to go over the top soon in hand to hand combat or face the lances of enemy knights. But used well, they can win a game for me. A normal game, that is.

I've got two bishops. They're true to form in that they stick to their colour, by which I mean that if a bishop starts on a white square, he can only move diagonally in clear space on white squares. If starting on black, he never leaves black squares.

Working together, they can control the game in my favour. Church leaders everywhere know the value of sticking together no matter what. If I lose one, I lose more than half the power of either, as together their power is greater than the sum of their parts.

I've got two knights – formidable fighters because they can hurdle obstacles, like pawns and pieces. They never jump straight, so my warriors are constantly in danger from sneak attack. They have no morals and work well with bishops, and can threaten several pieces at once.

So much for chivalry. It's not nice to be forked by a knight.

On each end-square are my castles. I don't know whether it's cooler to call them rooks, but as kids we called them castles so I'll stick with that. They move only straight ahead or to the side. They're the big guns that are best used nearer the end, as they need lots of space to move, and the board is too cluttered for that at the start.

Who could I have forgotten? There's one more. Oh, the Queen!

I'm joking, of course – who could forget her? She's the one I build most strategies around. She moves in any direction, given space, and has the combined power of bishops and castles. She protects the lame old King as no other piece of assurance can. These days, it all revolves around her.

I could sacrifice my Queen to win a real game if I'm up against a careless player, but not the game against Mr C. Lose my Queen against him? I'd die first. Or very quickly afterwards.

There's not much chance that I can win the game we two play, but Queenie and I, we can use all our men and our combined wits to string the game out as long as possible.

.
Where's this heading? Well, when you first get diagnosed with cancer, the game starts. It's a life and death game, so not quite like playing against your sibling, or fooling round with some computer game. Your life is on the line – so it's worth thinking about how you'll play it.

When the game begins, you are probably at the strongest you'll be from here on. Other parts of your body remain sound, functioning well. You have your armoury intact - for the moment at least.

What makes the difference now is most likely your strategy.  There are three phases of the battle against Mr C, just like in chess – the opening, the middle, and the end game.

If there is such a thing as chance in chess, it's probably only in who goes first, because that first move will dictate to an extent the direction of the game.

But against Mr C, no. He always gets first go. The moment you get your diagnosis, he's already made his first move – probably long before you knew you were in the game. You don't get to toss a coin. You're in. It tends to concentrate your mind, as the old saying about the prospect of hanging goes.

Of course, there are other variables in chess as well as in the cancer game. In chess, it may be whether you've had a bad [or too good!] night before the game, the quality and style of your opponent compared with yours, and audience participation. In cancer, it's the type of cancer, your age and sex, your attitude and your support team, both personal and medical.

In chess, after that first move, the weak player will be on the defensive, staying close to their end of the board. In cancer, it's the doubt that creates weakness. The options are on the table – and there always are options – and you have to choose which way to go.

The good chess player will use the opening moves to get the right pieces out into strategic places on the no-man's-land in the middle. The cancer players better get theirs sorted out and ready for action, and not waste too much time mucking about. The more time you sit doing nothing, the stronger your cancer gets. Research it, listen to those you reckon you can trust, and then make your move decisively. Have no regrets. No matter what the outcome, you did what you thought was best based on the evidence and advice available.

Then, you're into the middle game. That's the game of attrition. You willingly sacrifice pawns and pieces to take something off the board belonging to your opponent that you feel has higher value than what you surrendered. You play a forcing game when you can; i.e., you make the move that forces your opponent to dance to your tune. You flummox them by taking their knight in exchange for yours. The knights may be of equal value in theory, but you've upset their strategy, or so you hope.

At the clinic against Mr C, you take the initiative as well. This is probably the part of that game where you hit him with radiotherapy, chemotherapy – all that nasty stuff. This is your personal war of attrition. You're damaging the healthy parts of your body deliberately in exchange for what you hope is net gain.

If it's a tumour like mine, you're buying time, or trying to. In other cancer cases, the prize may be far richer. So do what you must. The alternative is to do nothing, in which case it will be a short game.

Mr C, as I said, plays a mean chess game. He loves the sneakier moves; en passant, where his pawn suddenly changes lane and knifes one of yours in the chest; or castling, where vital pieces are allowed to switch positions.

That's how it can be with cancer. Mr C stretches the rules or breaks them when you don't expect it. He kicks your shins under the table and takes two goes at one time. There's no umpire to appeal to. You just play on.

So by the end of the middle game, the trench warfare is over and the battlefield is strewn with victims now lined up beside the board. You count your losses.

In my case, it's a bit grim. I played fair, dammit, but he has cheated all along. I've gone to the bathroom and come back to find half my pawns are missing. My knights are skewered and my bishops have done a deal with him and have gone into hiding in the Vatican. A castle that never entered the fray is now sitting beside the board, the shock victim of his knight fork.

He hasn't escaped injury, but he's strong. He has nearly all his pawns now as well.... What? Cheating mongrel! He just grins and says they were lying low. They're jostling for position. I know what they're up to, but can I stop them? He has some very powerful pieces to defend them as they march towards me. I, wimpy old King.

I'm staring down the barrel but it's not over yet. The most elegant part of the game of chess has arrived – the end game, which is a different game altogether from the smash and grab raids we've just been through.

I have a castle and a few pawns. Most importantly, I have my queen.

Now give me a little time, and I'll tell you a bit about the end game.