Writing about the end game is turning out harder than I expected. In chess it's often a thing of beauty and subtlety if the players are well matched. But this is not a chess lesson, and it turns out that I can only write about my end game, where the players are poorly matched.

My opponent has never lost, so it's a bit daunting. 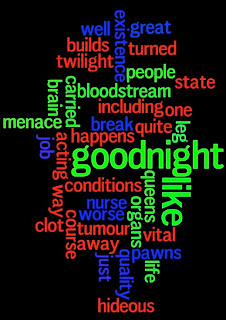 He's never on for a long game. A quick cornering, checking with only one option, and then sliding any piece in for checkmate, and it's over. He's got a busy schedule and a rapidly increasing number to play – men, women, and children. A steep increase in the number of malignant brain tumours in the young is the most sinister statistic of our time.

So Mr C doesn't want to waste effort on an ageing white male who, statistically, has 10 to 20 years to go before turning up his toes by acquiring some other unpleasant illness or condition.

I turn out to be a bit more obstinate than normal, dodging and weaving one square at a time and the white queen constantly getting in the way by keen foresight and some annoying blocking tactic. But in this end game, Mr C is steadily advancing a pawn or two when he can, while my Queen's fighting off his big guns.

The brain tumour is the great menace for people like me, but other conditions, acting like those pawns on their way to being turned into queens, can do the job just as well. A clot which builds in the leg can break away and be carried in the bloodstream to one of the vital organs, including the brain itself, and it's goodnight nurse if that happens – or worse, if it's not quite goodnight but some hideous state of twilight existence with no quality of life.

He had me in check twice, and in a bad spot on each occasion, and getting out cost me plenty.

I also had him in check a couple of times, though that was more annoying than anything else for him. The surgery to remove what was possible of the tumour in the first instance, that was good; but a GBM tumour can't be eradicated because it's never discovered until it's wormed its way through to places it can't be checked, let alone checkmated. 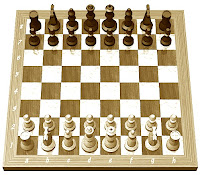 Mr C got out of that one quickly and steroids checked him once more for a couple of months; effective in one way but creating a permanent dependency. Clexane to treat serious clots produced side-effects. Focal seizures increased as motor centres were attacked. Drugs to treat seizures were increased, with more side-effects. My right arm stopped working, producing muscle wastage. When we went out, I was in a wheelchair.

One of the things about chess is that checkmate can occur at any stage of the game, even when you have every one of your men* on the board. That wasn't the case here. Mr C was taking every pawn and piece in sight, and it was tempting to give up at that point and bow to the inevitable, as we had run out of effective conventional tactics.

We'd done what we could but had one last thing to try. It couldn't win us the game, but it might extend it into a weird form of stalemate in which buying time might give us something worth having.

I have to stop for now.

* I can't think of a collective word for the pawns and pieces on a chessboard, let alone a gender-neutral one – can you?