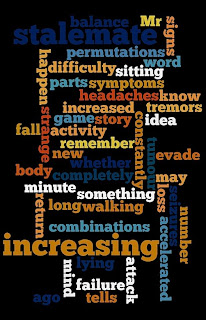 How does that fit in with my chess game? In chess, as the end of the game itself approaches, the losing player's king is placed in check, and the final trap is sprung when the king is checked and has nowhere to go. That's it. Checkmate.

There is one slim hope for the losing player, and that is a stalemate, but I won't try to explain that here. Well, I did explain it, but it got too complicated and didn't add anything to this story, so a pointless paragraph is gone, and we're all the better for that.

In a stalemate, no-one wins. It's a Get Out of Jail Free card for the player who was going to lose. (Ah, sorry – I've just Monopolised my chess game....)


In my game, there will be no stalemate. Mr C won't fall for it. I may evade his attack for as long as I can, but a stalemate won't happen. I know this because of the signs that are constantly increasing in number. The return of seizures, the headaches, loss of balance and increased difficulty in walking and swallowing, the strange, apparently random tremors in other parts of my body when I'm sitting or lying down; the increasing failure to remember something that was in my mind a minute ago, whether a word or an idea. Some of these symptoms of accelerated tumour activity are not completely new, but the permutations and combinations tells their own story.

It seems the king is rapidly getting boxed in.

In a real game, the losing player will see defeat coming, shake hands with the opponent, and resign the game before having to play it out to an inevitable and perhaps humiliating conclusion.

Mr C doesn't like that ending. He may play a mean game of chess, but he only seeks growth at the expense of dependency, and the great irony is that his win is his own death. He will refuse to accept the resignation of his host and he will demand that the game be played out to the bitter end.

It may well be that he's more subtle than a mere biological cell-cloning program, and is capable of tiny mutations that render yesterday's treatments ineffective, or less effective than they were. His only intelligence is to find ways past the barriers that contain him and his influence. Don't be fooled; he may well be better at that game than many give him credit for, and this means researchers can be trapped in relying on outdated remedies or approaches and faith in faulty data. But that too is another story and takes me away from this one.

Here's the blunt bit. There is no honorable resignation for me. Our society, for all its multiplicity of reasons, some logical and some idiotic, decrees that the game must be played out to the last gasp. It allows no right for the player to decide just when the game should end, and thus, on grounds of higher purpose, denies the last shred of dignity in the process. And this is specially true in the sequence of events in dying from brain cancer, or other neurological calamities for the organism, where the invasion is into the core and very centre of our being. We are no longer who we were.

I've always accepted that life, by its very nature, is not fair. I go along with that. But opposed to what you might think I'm saying, life has been unfair in a good way for me, compared with the lives of so many on this planet. In the natural world, fairness is not an issue; for humans, fairness is a rather simplistic idea constructed by the mind, and exists only there. If you believe in fairness or unfairness in such cases, then you have the sticky moral question of explaining why they happen – and most of the answers I've seen to that question are far from convincing. In fact, I'll go so far as to say they usually insult my intelligence.

So to me there is a terrible cruelty, with no redeeming feature, in cloaking the right to a dignified ending to the game in platitudes, specious arguments and blind dogma. None, including bishops and those new knights of the realm, our politicians, have any right to impose this nonsense upon those who do not accept their views. They play their games with our lives; but not content with that, with our deaths as well.