Asparagus and the God part of it all 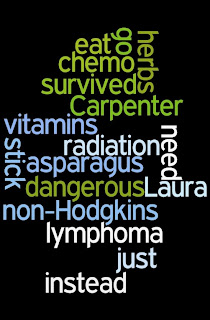 As with the first part of this commentary on things not to say to people with very serious medical conditions, I'll refer you to the original brief article as a courtesy to the author, instead of gutting it.
I decided to mention only things that relate most directly to what I've experienced. Some of the others related to women's experience of cancer, especially breast cancer, are best explained by women.
So, I've chosen to write about just two. Please go to the original site for the others. They're pretty awful things to say – so thoughtless I can barely believe anyone would.
☤     ☤     ☤     ☤     ☤


"You won't need radiation if you just eat asparagus," – said to Carla Zambell


"You shouldn't go through chemo because it's too dangerous. You should stick to vitamins and herbs instead," – said to Laura Carpenter, who survived non-Hodgkins lymphoma

When you get a diagnosis like mine, and are told your life expectancy is three months without treatment, you face an immediate decision. You don't have time to experiment with some alternative treatment that has not gone through rigorous scientific testing that shows it stands up to traditional methods.

Remember Steve Jobs, the Apple man?  Architect of the most powerful company in world history. His amazing creations were based on taking a chance, going on an extraordinary instinct. Why not do the same when he was diagnosed with terminal cancer? Why not try alternative methods to the nastiness of radiotherapy and chemotherapy?

Because it almost certainly shortened his life by months or possibly years, that's why. He faffed around with alternatives, finally having to admit that they were useless as primary treatment, and regretting not going down the path a scientific evaluation of options would have told him to immediately.

The one time his instinct let him down was over the most important thing in his world.

In cases like mine, there is no time to experiment with homespun remedies. If you want to have a try with them when traditional methods fail you, go ahead. Some cancers do retreat, often for no apparent reason. Some cancers may well be restricted by the use of a complement to regular treatment by diet and non-invasive methods – that's why I am a fan of anti-angiogenic foods for my condition.

This isn't to say that all traditional methods work in all cases. I suspect some of my treatment was not very effective, but that's a guess. It's only with the benefit of hindsight that I can say that, and even then, how do I really know? I couldn't afford not to do things the way we did, anyway.

When this 'advice' about rejecting a traditional method comes from a person who has not used it themselves to recover from my form of cancer, pardon me for being sceptical. I don't have time to experiment in the shortened time I have left. I am not keen on someone tinkering with my hopes, naivety and fears, however good their intentions.


Ah. It looks like I will need to deal with the God part of this in another episode. This looks like a good place to stop. But if you haven't read quite enough on this for one day, here's a brief but perfect comment on the first episode that is beautifully put.