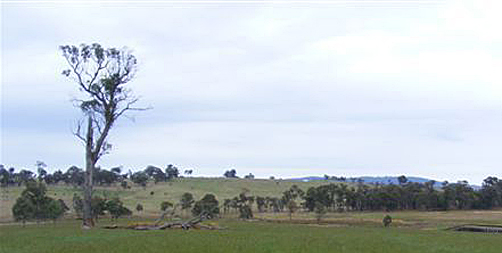 We pass the airport and head along the flat tableland. It's never been an exciting vista, but easy on the eye. Again, I see burgeoning growth; the sap rising in the leafless silver birches, newish yellow branches amongst the older white ones.

Further on, the skeletons of eucalypts which didn't make it through the dieback of forty years ago are now stark and white against the grey-green of the winter pasture. Some in their death are spectacular in size and shape. Amongst them are others still struggling with that mysterious phenomenon – large dead branches amongst others barely alive, with little patches of miserable leaves on them that look like they are carelessly attached in untidy bunches; a bit like the large tree in the picture above.

Everyone who's lived here a good while has a theory about the dieback disaster. 'It's the Christmas beetles, says one. 'Root nodules.' 'Over-fertilisation.' 'It happened in the 1890s, so it's just a cyclical thing.'

I have my views, but here's not the place for them.

Ah, Chilcott's Swamp. I'd love a house address like that. I start noticing the roadside hoardings.

'Some of these are ... amazingly bad. I could put funny captions to them. I wish we had more time to stop and take pictures.'

'Just as well we aren't stopping, my doctor.' She calls me that from the university days. 'We've allowed 75 minutes to get there, and if I start taking photos for you, we'd need two hours.'

It's true. We would. And my enthusiasm for it would be gone on the way back, as well as the perfect now-quality of the light.

Funny that. If we were in Melbourne, staying with Lena or Alice, it would probably take nearly 75 minutes from the time we got into the car to sit down in the always-overcrowded reception area of Peter Mac, the cancer hospital in the centre of the city. Going to Tamworth, we'll park (no charge!) virtually at the front door of the clinic where the MRI is done.

I state the bleedin' obvious. It's a township off the highway.

'We've never explored its full scenic offerings, have we?'

Further along, I notice trees that are so heavily studded with mistletoe that they are dying. The little tangerine-breasted mistletoe bird eats the fruit pod of the mistletoe. It flies to another part of the tree, or to another tree. The seeds pass through the bird and it deposits a nice gooey mess containing the seed in a tree fork – anywhere it will stick, actually.

Soon there's another mistletoe digging its roots into the gumtree and sucking the sap from the eucalypt. The rusty-green tresses of mistletoe make it look like the tree is weeping.

So it should. This is a parasite, and too many on one tree will kill it. This isn't the sort of mistletoe you kiss under.

'You always say that.'

We talk about things that are none of your business, or we sit in a comfortable silence, cocooned in our own meditations, until we come to the top of the Moonbi hills. There are some beautifully scenic snaps that could be taken, as the valley floor way below is framed left and right by great granite boulders that guard the highway.

There's a mountain in the distance. It's not quite Mt Fuji, as it's too worn down for that, but directly above it is a long, almost vertical puffy cloud.

'That earthquake we had a few weeks ago must have done more than we thought.'

'Lava,' says Tracey. It's a private joke, though I'll tell it to you if you're interested. We laugh.

Still, I do wish we had a snapshot of that mountain with its fake-volcanic top spewing cloud-smoke.

We drop down the range. It's no wonder there are exits with beds of gravel for trucks with failed brakes. Having to use one of those with twenty tonnes or more of crusher dust on board behind you would be terrifying.

Our brakes don't fail, and we're soon off the Tablelands altogether.

In all honesty, I can't say that about the town itself. It's not quite Bogdanovitch's township in The Last Picture Show, but it's getting there. I think that's why Tracey doesn't like the name.

We enter the last twenty kilometres or so on the outskirts of Tamworth. The hoardings lack invention and the buildings are strictly utilitarian.

We don't pass the Golden Guitar, but we pour scorn on it.

'What a disappointment it is.' (Here I translate into respectable language what Tracey actually said.) 'They could have made something spectacular, with glitz and shiny gold sparkling in the sunshine, and what do they do?'

'The Beige Guitar in flat paint.'

Get your act together and brighten it up, Country Music Festival Committee. G O L D E N. Get it? It's not that hard. It's not a Stradivarius.

We're here at the clinic. For all my crowing about parking at the door, we have to cross the road and walk a full fifteen metres to enter the reception area. We're early, which is unusual – not that we've ever been late. Our timing's usually been almost to the point of punctiliousness.

They're running a fraction early too, and before long I'm called in.